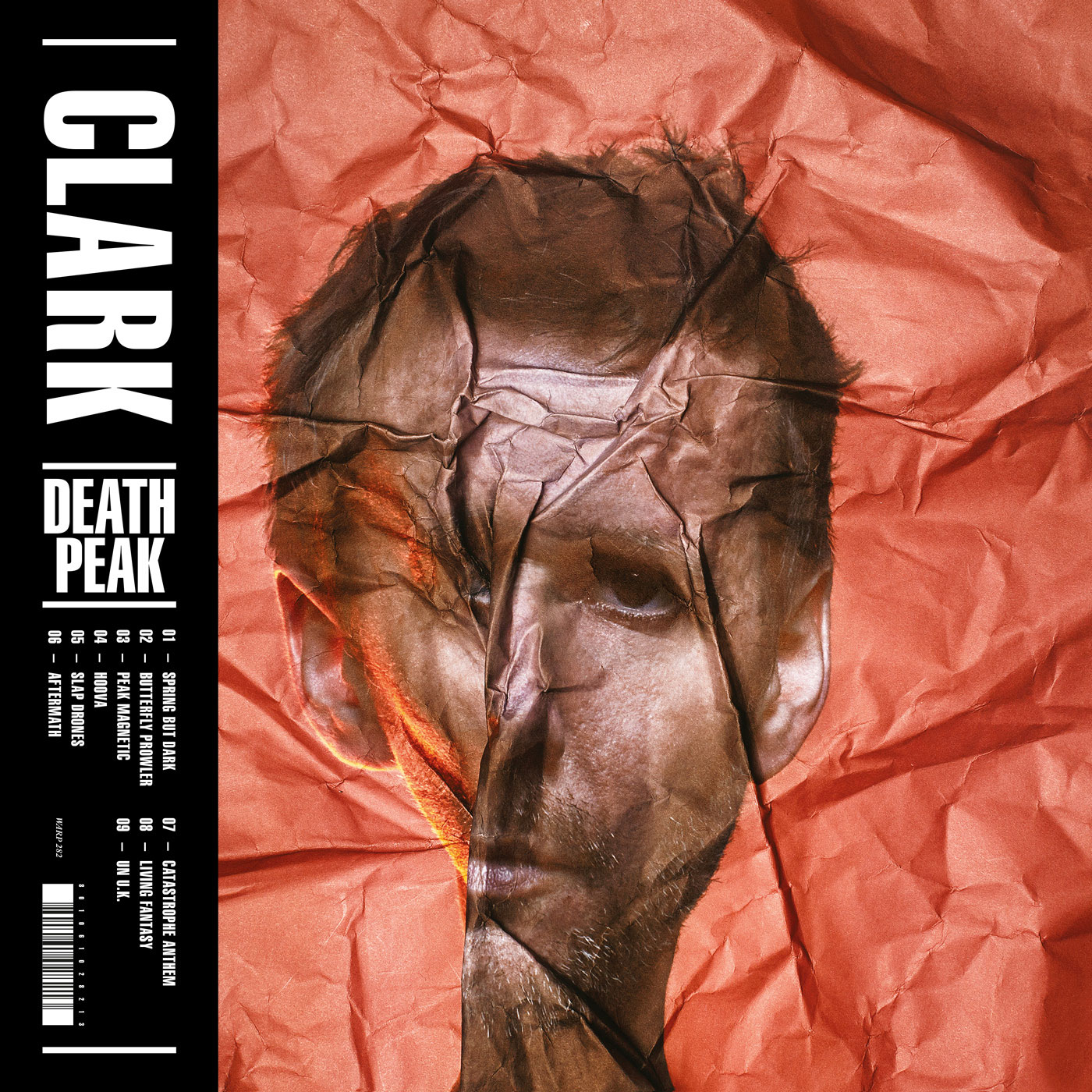 Warp mainstay Clark returns with a new long player. Simon Tucker reviews an album he believes is a new benchmark in electronic music.

Music moves in cycles. We all know this. First comes the lull, the tedious wait as the mainstream is smothered in dross. Then a clutch of artists will step into a known form, twist it into their own shapes, create a new, create a movement. There’s a golden period where things are exciting again as we are treated to thrilling twists on the old narrative. Next, the bandwagon gets lept upon, the sound dilutes, it becomes the mainstream and we are in the lull again. This has been happening since the dawn of recorded music. Why the (well-told) history lesson you may be wondering? Well, it is this writers firm belief that with Death Peak, Clark has just broken the dam. He has created a new form of electronica that has the history of his predecessors in its DNA and taken it into a bold and brave new direction. Along with other visionaries such as Four Tet, Burial and Mark Pritchard, Clark is leading from the front and sticking his flag in uncharted territory. This is a brave new world and Death Peak is set to be its national anthem.

Over its forty four minutes running time, Death Peaks manages to wriggle out of any unseen genre rules and restrictions. At its core it may well be considered a Techno album but this is a startling fresh take on the genre. It’s a psychedelic, kaleidoscopic techno album that swims around never settling down. At times it feels like the whole thing is about too fall apart as each song here contains a myriad of styles and nuances. This could so easily have gone wrong and ended up sounding messy but Clark displays a fierce intelligence throughout, always bringing things into focus just at the right moment. If Roxy Music made Techno music….

Songs feel more like suites than standard intro, build, drop fair. Peak Magnetic manages to sound like a whole night out crammed into six minutes. There’s a gentle almost improvised feel to the beginning (like the fluttering in your stomach when you are about to embark on a night of dancing) before the sound dips out and all we hear is the muffled sound of a bass drum pounding away behind the walls of the venue you are about to enter. That’s the moment where Clark throws you through the doors and you are hit by the sounds, sights, and smells of a perfect club. Before we reach the end, Peak Magnetic descends into insidious fuzz and drone warning us that we may not be feeling too well tomorrow then delivers a fluttering synth line that sounds like memories of the night flying around your head before you finally fall asleep.

Over the course of the album Clark is constantly showing you his left hand before slapping you with the right. Butterfly Prowler is sexy, seductive Samba Techno (which at one point seems to tip a nod to the piano melody in Radiohead’s Bloom), Living Fantasy is cavernous and epic, Slap Drones is a new unnamed genre that is undeniably dancefloor friendly with a fierce last section and Hoova is a nasty swine, a twisted two step with stabs of female vocals adding a weird sense of serenity.

It is Clark’s use of voices throughout the album that is the real star of the show. They are scattered and ethereal sometimes making you feel uneasy but most of the time hovering above the joyous cacophony anchoring the whole thing, making it a positive and uplifting album. This is best displayed on the extraordinary Catastrophe Anthem. As a celestial chorus sing to us, telling us they “are our ancestors” it is like we are being visited by the ghosts of our past, warning us that they are always there watching and for us not to make the same mistakes they did. As the song progresses the feelings are intensified until it becomes one of the single most emotional pieces of electronic music ever created. The last example of which was on Burial’s Endorphin. It is the latter’s Untrue, Four Tet’s Morning/Evening and Mark Pritchard’s Under The Sun which Death Peak seems to share a kinship with. All albums that showed a courageous and emotional edge at the core of their creators being and albums that whilst never afraid to take you into dark corners, always led you back out into the light and warmth of optimism and hope.

Death Peak is set to be a landmark album in the genre of electronic music. It will be looked upon by listeners in the future where once again the atoms shifted and the wheel turned upwards. It is an intense and intensely beautiful listen that strikes exactly the right balance between the head, the heart, the stomach, and the feet. Buy it, use it, learn from it. Stunning.