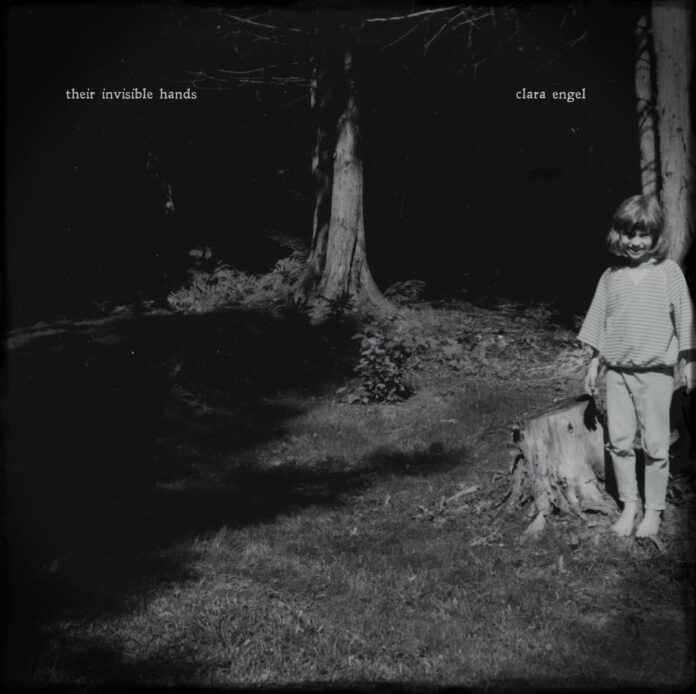 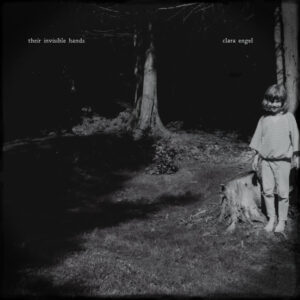 The music of Toronto-based singer-songwriter Clara Engel (they/them) has a quality that’s hard to define. Imagine that scene in Guillermo Del Toro’s Pan’s Labyrinth where Ofelia draws a doorway with chalk on the wall, only to step through it into some kind of mystical parallel world, a world full of wonder with something dark lingering at the edge of the night. It’s this kind of magical, transportive experience that Engel’s latest album provides. Their Invisible Hands creates its own world; a world of wayward sunbeams and slumbering devils.

O Human Child drifts in with a ghostly, reverb-drenched melodica. Engel’s voice appears through the mist, unintelligible at first and accompanied by a wall of wailing, unearthly harmonies. “Come away/ O human child! / To the waters and the wild” Engel beckons like some folkloric, woodland dwelling entity, “with a faery/ hand in hand/ for the world’s more full of weeping than you can understand”. The line is in fact a direct quote from the W.B. Yeats poem, The Stolen Child. The tone is dark, uneasy and otherworldly. Suffice to say, dear reader, this is music to listen to in the dark.

Albums like the gorgeous Hatching Under The Stars saw a number of different musicians play on the songs yet Their Invisible Hands is an entirely solo venture. Engel creates graceful, vividly drawn soundscapes using cigar box guitar, talharpa, shruti box, melodica, found percussion (like a trunk they found in the street), tongue drum, chromonica and various guitar pedals. The talharpa is a three-stringed bowed lyre that creates a sound quite unlike any other. Its weeping tones are put to excellent use on the instrumental, Dead Tree March. The first of a number of instrumental tracks that help give the album its immersive ambience.

Golden Egg is a strangely comforting slice of celestial folk with a gently persuasive melody. Every inch of the song feels like it’s pining for something, a longing that comes through in Engel’s delivery and cryptic wordplay. Birds and nature are a recurring motif throughout Engel’s work and come into play on Murmuration. The song glides along on plucked strings and mournful talharpa as Engel holds us hypnotised, “No secrets/ No blessings/ No lies/ All is breath and flight”. Oh my, what a thoroughly beautiful piece of music.

Ginko’s Blues is a subtly unsettling instrumental that could happily accompany some long-lost folk horror film. Blood On Clara’s Claws, anyone? I Drink The Rain comes next and paints the image of a long, sleepless night, bristling with dead stardust. “A bird that whistles/ A bird that sings” they swoon, “a bird whose cry makes your skeleton ring”. I’m currently listening to the track in the early hours of the morning, lost in every word and sound. Engel’s music thrives in the black, inky mystery of the night-time, the ground damp with dew and the world bathed in moonlight.

Cryptid Bop is a wonderfully off-kilter instrumental that sounds like it’s pulling itself from the undergrowth, covered in earth and possessed by woodland spirits. The sound Moondog would have made had he lived in a forest instead of on the streets of New York, perhaps? High Alien Priest is full of quiet heartbreak as it takes us through the backstreets and the lonesome, crumbling dive bars. “It’s all fun and games” they sing as the song gradually unfolds, “until somebody shows you their heart”. Engel is a master at using space and a near-glacial place to draw the listener in.

Magic Beans uses the tongue drum to great effect, a catchy and contemplative track that finds Engel wondering aloud, “I’ll sell my soul if I’ve got one/ does the devil’s ensemble need some xylophone?”. Well, they do say he has all the best tunes, right? The beautifully titled, Rowing Home Through A Sea Of Golden Leaves comes next. An utterly spellbinding instrumental that pulls you into the sunlit, autumnal image created by the title. If it isn’t obvious by now, Engel is something of a magician.

The tender and wonderfully evocative Glass Mountain finds Engel aching over the spacious, ethereal instrumentation. “Days wash away like waves in the sand” they sing as the melody goes about cleansing my tired soul, “and the dead clap their invisible hands and laugh”. Honestly, there isn’t another artist I can think of that sounds quite like Clara Engel. The Party Is Over finds our guide in the midst of a sleepless night, caught between “wounded sunsets” and “raging seas”. Melancholic yet never defeated. “Unholy and heartsick/ ouroboros eat” sings Engel as they return to the comforting embrace of nature, “let me lie in the forest/ moss grow over me”.

Over a brilliantly foreboding drone, Engel sings us to sleep with the album’s final piece. The Devils Are Snoring is a lullaby straight from the darkest of Grimm’s Fairy Tales. Close your eyes and you’re in the heart of the woods, magic chalk clutched in your sweaty palm. Let the songs transport you to another world; a world so richly painted by the subtle, unhurried instrumentation and Engel’s endlessly evocative poetry. When the album finishes it’s like waking up from a dream. You realise you’ve been thoroughly lost in the labyrinth; absorbed and utterly enchanted.