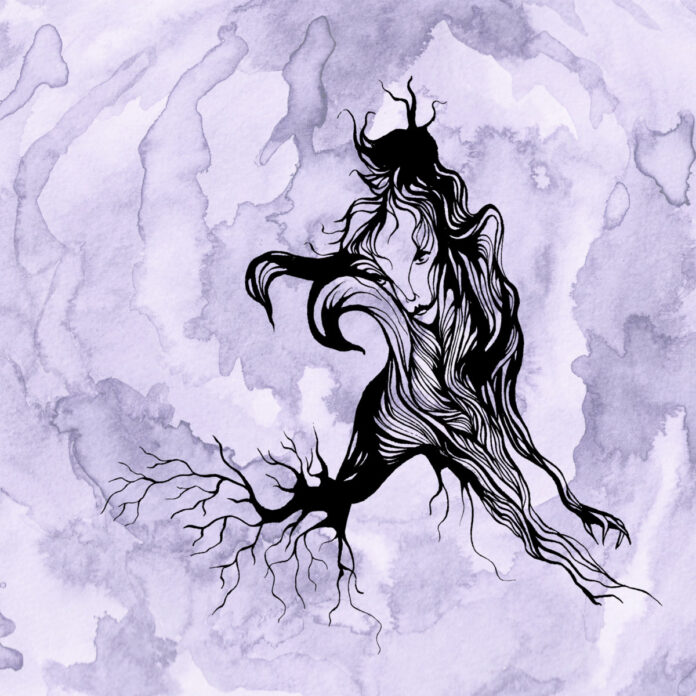 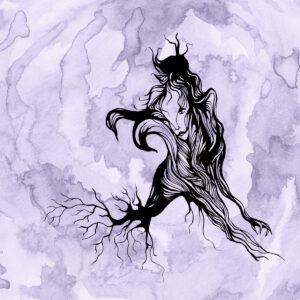 Toronto’s Clara Engel releases a new album of tender, celestial folk. Andy Brown waits until it’s dark outside to give in Dressed In Borrowed Light his full and undivided attention. He shares his thoughts for Louder Than War.

There’s something immensely powerful about the music of Canadian singer-songwriter Clara Engel. It isn’t a power that’s derived from volume but from the deeply mediative quality of the arrangements and Engel’s spellbinding delivery. It’s the kind of music that seems to cut through the noise and chaos of the outside world and create some kind of vacuum: a space where it’s just you and the sounds seeping through your headphones. The kind of music that brings you to a complete standstill. Give Dressed In Borrowed Light the time and space it deserves and you’ll open yourself up to something incredibly special.

Yesterday We Lived Forever drifts in on ambient drones, subdued percussion and Engel’s economically strummed cigar box guitar. Like a slow, steady heartbeat the track leaves breathing spaces between the notes. Engel’s voice reaches through the dreamscape to pull me deeper in, “little sparrow when you sleep/ do you dream of stealing bread?”. Time appears to lose all meaning as its seven minute runtime passes by within the blink of an eye. Dressed In Borrowed Light isn’t simply a collection of songs, it’s an atmosphere and an experience. The album was recorded at home during the pandemic but reaches far beyond the parameters of Engel’s abode.

If the home set-up has you imagining a battered old acoustic and a four track then think again. Engel plays an assortment of instruments from cigar box guitar, electric guitar and shruti box to chromonica, gusli and tongue drum. The subtle percussion coming from found objects like a wooden trunk and a soft mallet. Other friends and musicians appear sporadically throughout the album to contribute cello, lap steel, morin khuur, bass, drums and backing vocals. I had to look up some of those instruments but suffice to say they all add to the hypnotic, dreamlike atmosphere. Dressed In Borrowed Light was conceived at home but it’s head and heart are clearly in the stars.

In A Bed Of Snow creaks into life next: guitarist Brad Deschamps layers the track with atmospheric guitar tones as Engel weaves through the mesmeric melody. “Sowing seeds in a bed of snow” croons Engel as we’re guided through the frosty, ethereal terrain. Pomegranate Seeds invokes quiet tragedy and early, blurry-eyed mornings as it takes us to, “a valley full of pomegranate trees”. Engel conjures landscapes with poetry; the songs populated by birds, trees and the wild beauty of nature. The seeds perhaps representing growth and re-birth; recurring themes in Engel’s work. The quietly apocalyptic Flame Tree has the air of some transformative ritual about it as Engel pines through the smoke, “stay with me for a while”.

Dressed In Borrowed Light reaches deep inside the listener with a consistently otherworldly atmosphere. I’m reminded of the first time I heard Coil, specifically albums like Musick To Play in The Dark, and their ability to create immersive whispered soundscapes. Heart Of Rags utilises the subtle percussion to great effect as Engel sings about songbirds in scrapyards. Beauty, hope and love found in the most unlikely of places. The reoccurring themes of fire and change coming through as Engel yearns, “heart of rags/ dowsed in kerosene/ burning clean”. Silver Scythe is a troubled nocturnal lullaby that eases us into the “merciful moonlight” with one last celestial hymn. Wrapped in the songs gentle embrace and kept safe from the devils in the dark.

Although you could accurately describe them as a singer-songwriter, it’s not a label that does Engel any real justice. The album is much more than a collection of well-written songs: the tracks flow through the listener to create a deeply immersive and rewarding experience. For 40 minutes you’re completely under Engel’s spell. A true artist, Clara Engel’s work goes beyond trends and styles to create something unique and timeless. If you let it, Dressed In Borrowed Light will gently transport you somewhere else entirely and isn’t that what’s so magical about music?