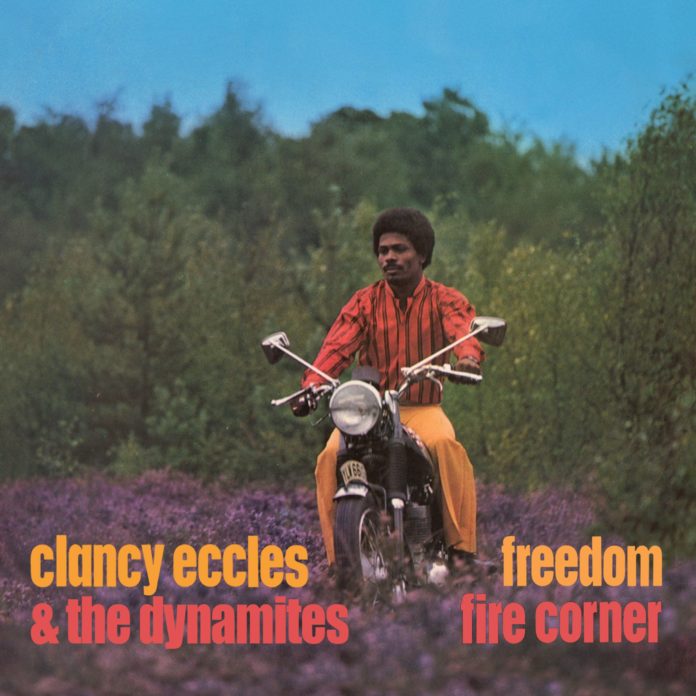 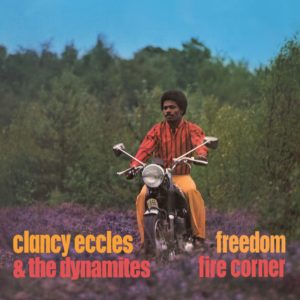 Reissue of two classic 1969 reggae albums helmed by Clancy Eccles, who was at that time successfully combining his singing career with production work. This edition rounds up the remaining Dynamites and King Stitt recordings in 1969, plus many other bonus tunes…….LTW’s Ian Canty hears the man on a motorbike from St Mary’s who became one of ’69 reggae’s prime movers…..

Clancy Eccles was born on 9th December 1940 in Dean Pen, in the parish of St Mary’s, up in the north east of Jamaica. The youngster was born into evangelical family and sang in church from a very early age. Bitten by the musical bug rather than the religious one, at the age of fifteen Eccles struck out on his own, singing for tourists in between waiting tables. Whilst competing in a talent show he was spotted by Coxsone Dodd, who quickly signed him to a recording contract. An early ska/r&b cut Freedom was Clancy’s first Jamaican hit single, finally released to the public two years after it was recorded in 1959 – which was after it being a wildly popular “exclusive” disc on Dodd’s Downbeat sound system.

Despite that early success and quite a few releases from 1961 onwards, he had to wait a long time for his debut album, the 1969 LP also entitled Freedom. In the intervening years he had busied himself by branching out into both concert promotions and record production and for a while had quit music entirely, being unable to make ends meet. But at the time when Freedom the album was released, Eccles was back and at the zenith of his creativity, operating through a number of record labels including his own Clandisc, all of which produced a wealth of music. The original reggae boom was in full swing and Clancy was right at the forefront, scoring some big hit singles that appealed to a wide range of fans, including members of the UK skinhead cult.

Freedom’s sleeve photo is one of the classic reggae music images, with Clancy riding a motorcycle through a rugged terrain absolutely screaming relaxed cool. That picture embedded itself in Jamaican music history and the album received a UK release on Trojan, opening it up to those new fans of the sound. The musical contents are not a let down either. As was mostly the case, the record was almost completely made up of those hit single sides, but more unusually was entirely self-penned and produced. Even in its lesser moments Freedom is still a solid reggae platter with a lot to recommend.

Opening up things is a neat recut of his first hit (and album title track), very dance-orientated with Eccles’ voice a pleasing mixture of both the gruff and the smooth. Cynthia Richards’ vocal capabilities are used to good effect on Two Of A Kind and the big hit Fattie Fattie also shines. This single very nearly got Clancy a UK hit too as the new British based fans lapped up this excellently sung and irresistibly catchy offering.

Shu Be Du is perfect boss/skinhead reggae and the template for King Stitt’s Fire Corner (more about that later) and the organ-led shuffle of Dollar Train is another gem fit to grace any dancefloor. The rocking rhythms to Auntie Lulu and the rolling skank of What Will Your Mother Say also please a great deal too. Mount Zion, a great and very soulful duet with Noel Simms (billed as Scully here) brings the album to a fitting climax.

13 bonus tracks are appended to this first disc, providing a thoroughly look into Clancy Eccles’ recording activities in the same timeframe as the album. Festival ’68 packs steel drum exotica into a strident rhythmic skank and there is another cool duet with Cynthia on Dance Beat. A light touch is applied very well to The Revenge and if the relaxed groove of Great (Beat) slows the frantic pace a little, it is all conducted with dazzling flair. Added to the Freedom album, these single tunes present a convincing case for Eccles’ work in the original reggae era.

In his recording activities of the time Clancy utilised the backing outfit the Dynamites, whose Fire Corner album makes up the main part of the second disc of this new set. This studio band featured personnel that also had a hand in the Crystalites and Beverley’s All Stars, with Bobby Ellis, Paul Douglas and Gladdy Anderson being among their number. Given the talents of the people involved in Fire Corner there is no great surprise in the fact that this is elegantly played, eminently danceable fare from the off.

Though obviously a mostly instrumental set King Stitt voices the title track, which is as excellent and instantly memorable as it always was, from that famous unaccompanied intro on. One of the premier DJ talkover records. At the time of the LP’s release it had already become a firm skinhead reggae favourite and it features here along with two other Stitt solo vocals Vigorton 2 and Soul Language, with the latter’s tight rhythm and jazz-flecked horns being alluring.

Of the instrumentals Eternally opens proceedings with a brassy skank, a nicely exotic and original sound. John Public takes the tin whistle of Tom Hark and gives it a fast dance twist and the bright and austere sound of Mr Midnight also pleases. Basically there’s a great deal here to keep any reggae fan dancing the night away, with the musicianship and steady hand of Clancy always deployed smartly.

Among the bonus tracks on this disc we get three more King Stitt contributions, with Who Yea being the pick with its infectious holler and near-singing style. Winston Wright’s pacey organ instrumental Silbert Dragon is a goodie and Val Bennett positively gleams on sax on his offering City Demonstration. It’s left for Clancy and Stitt to close this collection, trading back and forth in fine style on Dance Beat (Version 2).

Not long after these albums were released Eccles decided to step away from music and instead move towards the political arena, becoming an adviser to the People’s National Party. He never went back to music full-time again, recording and performing very sparingly from the early 70s onwards. He died in June 2005 after suffering a heart attack, leaving behind a legacy of great music despite his relatively short recording career.

Freedom/Fire Corner is great listening and a testament to Eccles’ talent and vision during that original reggae boom. Though he didn’t manage to carry over those skills into the roots/dub era, there’s plenty here to suggest what might have been. He was never given to gimmicks, but he certainly knew how to produce a decent tune, which would have surely stood him in good stead. It wasn’t to be, but no matter – there’s an awful lot of top quality skinhead reggae here to revel in and it is just joyful to hear.