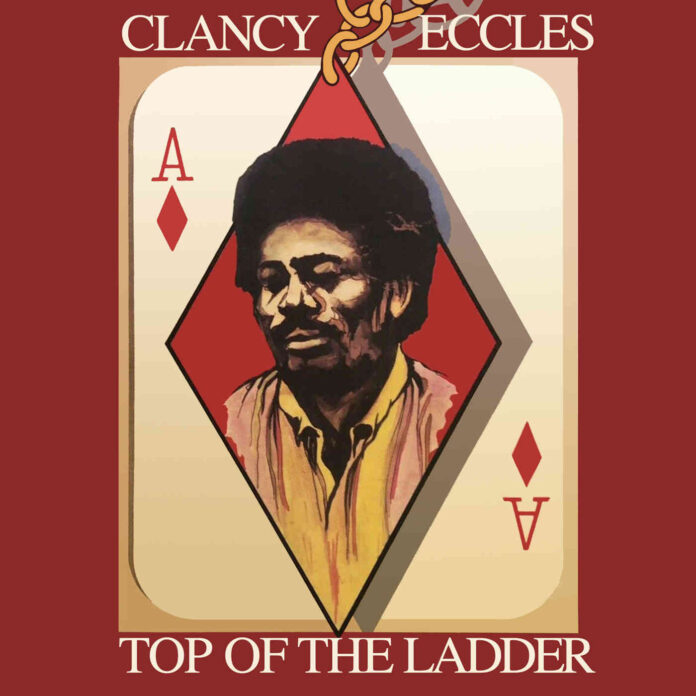 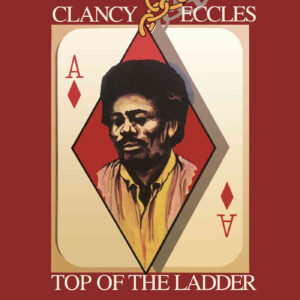 New 2CD compilation of Clancy Eccles’ productions from 1970 to 1972 based around his rare Top Of The Ladder album from 1973, originally released on the Big Shot label via Trojan in the UK. LTW’s Ian Canty looks at how the producer adapted to the changes of the new decade.

By 1970 Clancy Eccles had firmly established himself as one of Jamaica’s premier music men. After taking a break from singing for a few years in the middle of the 1960s, he had come back strong as both a performer and producer, scoring many hits on the island. In addition to this local success, his music became popular in the UK with ex-pat families and also the adherents to the skinhead craze. The resultant boom had thrust Jamaican music into the spotlight like never before. But inevitably this time at the top could not go on indefinitely and the new decade brought with it more challenges as fashions changed.

During the time documented on Top Of The Ladder Eccles’ approach shifted too. He gave more emphasis to his long-held political beliefs in his music. This was not an entirely new thing for him as even his ska-era hit Freedom had social conscious lyrics, but now he would go the whole hog backing Michael Manley’s socialist PNP party. In the run-up to the 1972 election he helped to organise a number of other big names like Bob Marley and Inner Circle to play gigs to support the PNP cause. Manley himself features vocally on this collection, intoning a speech on Power For The People (Part 2) on top of Clancy’s original backing track. Other Eccles’ hits like Rod Of Correction (featured here) had a marked political tone, the aforementioned Rod being Manley’s election gimmick of choice for the campaign.

Unfortunately this involvement also hastened his decline as a force in Jamaican music. After Manley was elected, Clancy was offered a job advising on copyright issues for the government, but he soon became disillusioned with the political process. Going back to his music set-up, he found that radio stations would no longer play his records due to his association with the PNP. This caused him to retreat again, only recording fitfully for a few years. Ironically when he came back to music in a more wholehearted way later in the 70s, one of his biggest hits was The Message by Neville Martin, very much a socially consciousness piece. Other successes followed, but he always operated at a much lower profile than ten years beforehand.

This new collection fits in neatly with Doctor Bird’s other Clancy Eccles’ releases. Though there are more pointed lyrics on show, it is not often to the detriment of the music, Manley’s contribution apart. We also get the trends of the post-skinhead years represented, like quick-fire versioning of mainstream hits (Merlene Webber’s take of Tammy Wynette’s Stand By Your Man springs to mind) and also strings being appended to original recordings to make them more palatable to pop fans.

Top Of The Ladder, the 1973 album that acts as the structure this collection is built around, provides the first dozen tracks here. Mostly made up of offerings from a few years prior to release that had stayed in the can, this record wasn’t much of a success at the time, fashions having changed quickly since the music was set down in the studio. Winston Wright’s organ instrumentals take up half of the LP’s duration and while they’re good dance numbers and impeccably played, particularly the primitive dub wobbles on Nyah Rock, they really belong to the skinhead/boss reggae era; in the case of the cool rocksteady number Cat Walk, even a couple of years before that. So it isn’t that difficult to see why in 1973 they may have seemed a bit behind the times.

Hits Medley by Clancy himself is a bit of an odd one, very much smooth pop reggae that includes Joe South’s The Games People Play. The best offering for me on the album is Joe Higgs’ Captivity, an excellent sufferers’ song with an abundant amount of fast-moving energy about it and the performance. Overall Top Of The Ladder is a more pleasing selection when viewed in hindsight than it may have seemed at the time.

Among the thirteen bonus tracks on this disc are a very unexpected reggae instrumental workout for Allen Sherman’s novelty song Hello Muddah!, Hell Fadduh! (retitled as Hello Mother) by Clancy’s studio outfit the Dyanmites and Mello & The Mellotones take hoary spiritual Old Man River into a rhythm-driven direction. Clancy’s two big “political” songs Rod Of Correction and Power For The People (Part One) feature also, with the religious imagery of the former being married to an irresistible dance beat and the anthemic latter also very good. It wouldn’t be right to have an Eccles collection without King Stitt and he is present with the infectious DJ toast Rub A Dub and though there are a few pleasant but unexceptional pop reggae numbers Tyrone Thomas’ Don’t Call Me Nigga hits hard, a great black consciousness song with gospel tinges.

The second disc of the set is entitled Sounds From Kingston Town 1970-1972 and gathers up many of Clancy’s other productions through the early seventies. Kentrick Patrick aka Lord Creator opens things up with his own Kingston Town, the first version of the song which would go on to become a major hit for UB40 year later. The original is of course the best. John Crow Skank excellently repositions the rhythm of the Fabulous Flames’ Holly Holly by adding echoing dub touches and an unnamed female vocalist nicely and Joe Louis by the Dynamites is a lovely, lazy trombone instrumental.

Barry Wilson appears to have only ever recorded Live And Love though it is difficult to see why, he had a more than decent voice for the kind of soulful reggae presented here. Errol “Honey Boy” Martin (not to be confused with the Oxford-based singer of the same nickname) first made a mark with the rude boy classic Dreader Than Dread, but he features here with two well sung efforts, the best of which for me is the feel-good sunniness of Single Man.

The rather better known Silvertones pop up with the touching Teardrops Will Fall and Clancy’s long running vocal group the Fabulous Flames also score with the cool skank of Hi De Ho. It is on this song that Eccles’ production skills really show, using a church organ effects and full horns to provide the perfect environment for the vocal group to flourish. Stranger (Cole) And Gladdy (Anderson) teamed up many times to great success, but their only cut for Clancy Tomorrow is a beautifully realised reggae ballad. The final song here is Eccles’ own What Will Your Mama Say, with the orchestral overlay a sign that by 1973 reggae was having to chase the pop market, rather than leading it.

Though perhaps not capturing Eccles at the height of his success, Top Of The Ladder still provides ample evidence that despite his divergence into matters political lyrically, he never let his high in-studio standards fall. It also dovetails neatly with the previous three Doctor Bird collections to provide a thorough overview of Clancy’s work from rocksteady to the begins of dub and roots. Though the dalliance with politics inadvertently stymied his recording career, he still cut an awful lot of excellent material in this period. Much of it has stood the test of time well and is a delight to hear on this new collection. Clancy Eccles deserves to be remembered as one of the top producers Jamaica has seen.