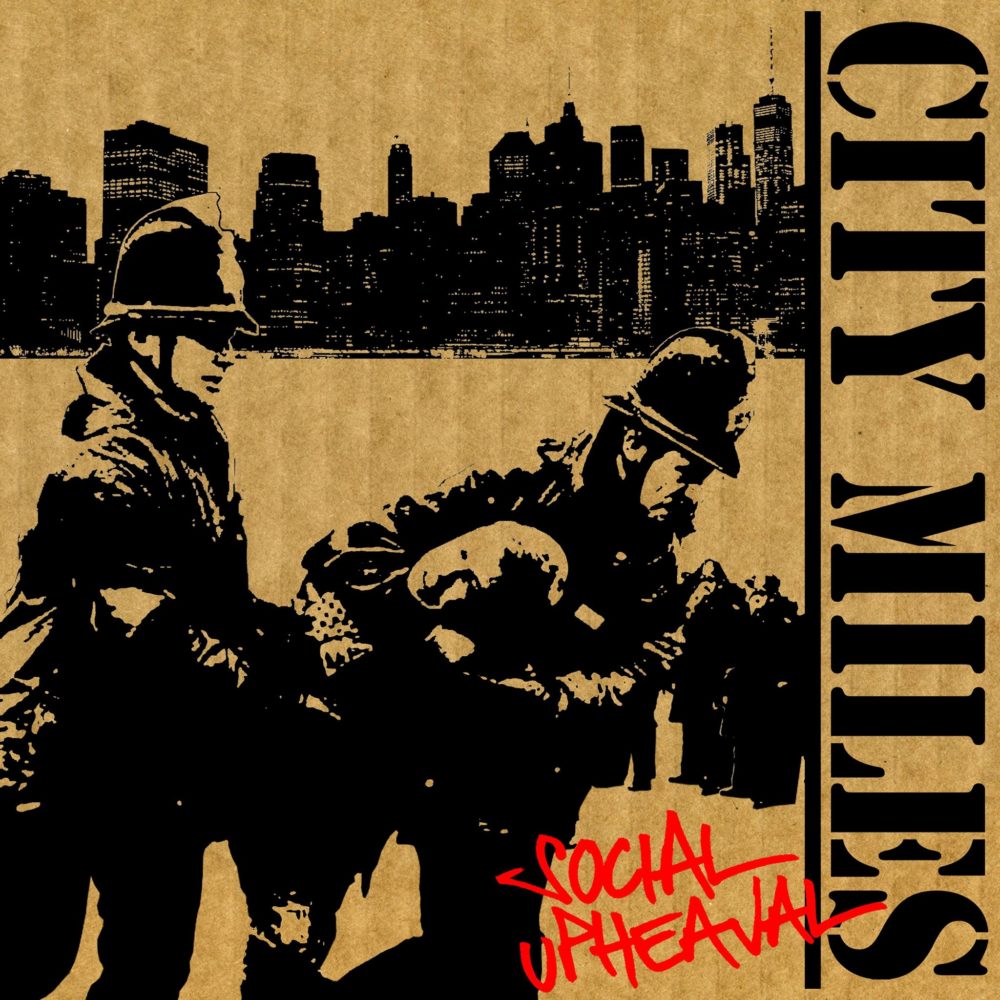 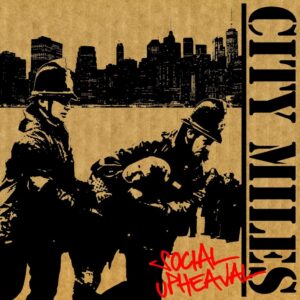 A naughty little crew treads the line between melodic punk, hardcore and oi singing about the football, beer and the general travails of life as a skinhead.  Standard fare in the subject matter for Oi! bands but Nathan Brown says this record is far from run of the mill.  A while waiting to be pressed, the album comes shortly after the passing away of the main songwriter, drummer, singer and key force behind the band.

I’d been looking forward to publishing this review for ages.  Now it is tinged with sadness and poignancy as my contact within the band and its main creative force died on 21 February, a week before the pre-release went live.  Marc Maitland, known as Mates to people in the DIY punk scene up and down the country, wrote almost all the songs, played the drums and sang for City Miles.  He had previous form playing drums in Blocko, Weeks and the No Marks.  He will be sorely missed by all who knew him and many tributes have been paid.  Mates contacted me back in April 2017 when he was putting the first song “Skinhead til the end” together.  He gave me the low down on what he was doing as he wanted a few backing vocals from me (and later asked for more on Criminals).  He would send through tracks at the demo stage for critical feedback, pictures of scribbled lyrics asking if they were clear or ambiguous.  And updates like “Got a message from Lars from Rancid who says he loves it” or “I’ve got so-and-so on guitar”. We chatted about the dodgy elements in the skinhead scene to avoid, who would happily share a stage with bonehead fascists, and a shared love of punk bands such as Conflict.  So I felt totally invested in this project.

When I jokingly referred to City Miles as “Boots and braces for the pop punk generation”, Mates was concerned…pop punk? WTF? So I shared the review with him to put his mind at rest.  Something I will not normally do, but as the release date wasn’t until at least February and this was December, I sent it through. I’m glad he got to see it.

What follows is what I’d written back in December, as it was, when the band was cloaked in anonymity. The other players retain their secret but Mates deserves all the credit that is due.  This one’s for you, Mates! Rest In Punk.

This lot have not worked their way up from East End pubs, they’ve exploded on the scene via the internet and managed to land a deal with Rebellion Records from Holland, purveyors of Oi for the masses, without playing a single gig.  They were featured on Oi Aint Dead 6 and are now getting a full release of their own.  Are City Miles a bedroom Oi band, a studio project or a nom de plume?  Nobody knows.  We seek them here, we seek them there, we seek City Miles everywhere….but this mystery bunch of herberts remain anonymous.  Their Facebook profile only shows the band in full on balaclava…

Although we don’t know who they are, we can deduce what they’re not.  They’re not fascist boneheads, that’s for sure, which is the key question that skinheads have to answer before they’ve even done or said a thing.  The rest of the population is assumed fine until they come up with some bigoted bullshit.  For skins it is often the reverse.   You need to publish a full personal manifesto before you are deemed to not be dodgy. Just cos of a few boneheads, it’s assumed every skin is fascist until they prove otherwise.  Judging a book by its cover?  FFS! It’s simple prejudice, mate!

City Miles tread the line between melodic punk, hardcore and Oi! over the 12 tracks of this release.  The mix of an Oi infuence with an injection of melodic hardcore is likely to appeal to a broad range of people.  There has certainly been a spike of interest in French Oi-inspired bands of late so City Miles are ripe to ride that wave.  Guitar hooks are borrowed from The Clash via Rancid.  Big power chords with little lead breaks so it’s a bit Steve Jones meets Mick Jones by way of Micky Geggus.  The guitar works with the bass runs like a high octane Cock Sparrer, snatches of Oxymoron, and shares something with 90s London bands such as Schwarzeneggar, The Tone and beloved Oi pastiche Hard Skin.  Vocals range from full on shouting to gruff sing song. The lyrics are well written enough to be for real, but there is an underlying vibe which leaves you wondering if they don’t take themselves too seriously, laughing in the mirror at themselves.  The songs are littered with pithy pearls of wisdom  – Oi proverbs if you will – that are part Confucius, part Pursey with just a hint of Ray Winston’s character, Carlin, from Scum.

Kicking off with No Guts, the album starts with a familiar stompy drum beat inspired by the football terraces, used by the Cockney Rejects on “East End” and every aspiring Oi band ever since.  When they sing “Lay down with dogs and you get fleas” I’m wondering if they are referring to those who are happy to play alongside nazi boneheads. The song accelerates into something that has just as much in common with the Ramones as Oi.  They spell it out: “N-O-G-U-T-S”.  Finishing on “You aint got no guts!” is a classic punk rock move.  Up next Away Day is a tribute to football, a necessary ingredient for your Oi! album.  More singing than shouting, the estuary English has a  bit of a tune to it.  Mugs of tea, the boozer, trains, being an ‘andy firm…it’s got the lot.  But this is a little too jolly sounding to be threatening.  You sense this “Naughty little crew” are only having a laugh.

Criminals has developed into my standout favourite just down to its pure catchiness.  The proverbial earworm.  Since listening to this album to review I’ve been caught walking round the house singing “This place is run by criminals” (and subjected to appropriate pisstaking from my partner).   When they sing “This place is run by criminals” it’s not some misplaced glorification of an East End villain, they’re singing about the way we’ve all been ripped off.  “This place” is not your manor, it’s your country.  And the profiteers are a bunch of crims.

Empty Vessels has a middle 8 that you expect to have claps on it for the full on glam/football chant. A gruff shouter over a tune that has a touch of The Members, it’s about being a gobshite after too much drink “Empty Vessels got the loudest voices”. Having just endured a train ride home full of footie fans I can attest to the strength of that statement .

Toe Punt is definitely more of a hardcore inspired number with a Leatherface influence IMO.  It’s about a loudmouth who everyone sees through, and turns out to be a grass,  “You’re just a downright toe-rag just a simple so and so”.  Could this be about Tommy Robinson I wonder?

Zipping forward to the end of the LP,  Thirty Degrees takes its cue from Sham’s “If the Kids are United”, but is more of an “If the adults are united…” and of course what you get when the adults are united is that most traditional of British pastimes – a good old riot, toe to toe with the old Bill “spray paint on white sheet, baton charge, no retreat”. Nailing their colours to the mast they reference anti-fascist flags.  The chorus plays out “Just a lovely summer’s day here in the UK, and when the temperature’s rising I feel my temperature rising”. As with the previous song, Enemy there’s a clear melodic punk influence.

Listen to Skinhead Til The End from  City Miles on Bandcamp.

“Skinhead til the end” is a good choice to close the LP as it will be well received for several reasons: It’s a cracking tune; It focuses on the skinhead identity and particularly appeals to the demographic of people who listened to Sham and the Rejects as kids, and it’s got a great sing along chorus (essential Oi component). What particularly appeals to me is rather than toeing the Oi line that work provides some wonderful identity they tell the truth that most of us hate it and would rather not be there: “Working away for a minimum wage when music fills our souls”. Most importantly there’s a chance to shout along “Oi!” at your record player at the top of your voice. All topped off with a middle 8 declaring  “boots and braces don’t make a racist”.  What more could you want?

Order the album from Rebellion.