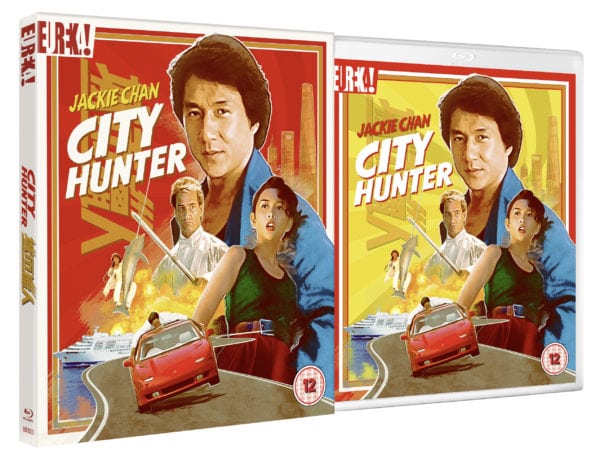 With his hyper-kinetic fighting style, elastic facial expressions and all round likeable persona, Jackie Chan was an inspired choice to star as Ryo Saebain in this adaptation of Tsukasa Hôjô’s much loved manga.

Ryo is a womanising private detective, also known as City Hunter. Along with his assistant Kaori Makimura (Joey Wang), he is hired to track down Shizuko Imamura (Kumiko Goto), the daughter of a publishing tycoon who has gone missing after learning her father is to marry a woman she disapproves of.

The City Hunter soon tracks her down at a local skatepark where she strikes a tin can with her hockey stick that accidently hits him on his head. This, as you can guess, is a movie where massive coincidences are routine and where absolutely no attempt at realism is ever made.

Shizuko escapes from Ryo on her skateboard and persuades dozens of her fellow skaters that he is a pervert who has just attempted to molest her.

He exits on a board himself pursued by skaters, displaying the kind of outrageous skateboarding skills that even Rodney Mullen at his peak would be envious of. Ryo can even smash through a plate glass window and descend around thirty feet and still execute a perfect landing onto a busy street! 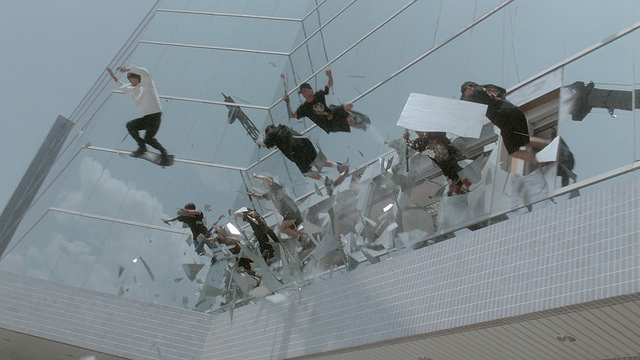 Most of the film will take place aboard the grand launch of luxury cruise liner, the Fuji Maru. Shizuko is there and Kaori too and they’re soon joined by Ryo. It’s a long story. Not only that but there are also a band of major-league hijackers led by Major Donald MacDonald (Richard Norton) who aim to take the wealthy cruisers hostage.

The humour is broad, even bordering at times of being so bad it’s good. One AIDS insult aimed at two Westerners, or ‘damn foreigners’ as they’re called, falls flat, though. A bigger problem for the movie is that anytime Jackie Chan is offscreen the fun levels tend to drop, especially when a X-Factor style song and dance routine is performed.

This is reputedly not one of Jackie’s personal favourites, and it has also found itself being criticised by some Jackie fans. Despite this, City Hunter is still a fantastically enjoyable watch with plenty of laughs along the way and some jaw-dropping set pieces that will live long in the memory. Chief among these being a beautifully choreographed and funny sequence where Ryo must do battle with two opponents who dwarf him. It takes place in a cinema where Bruce Lee is taking on Abdul-Jabbar in Game of Death onscreen.

This is handy as, during a break in the action, Jackie can take inspiration from Lee, as the original martial arts superstar shows how to dispatch much taller men.

Then there’s a madcap battle between where Ryo is forced to take on McDonald’s musclebound lead henchman Kim (Gary Daniels) in an arcade games room. Here the two men magically transform into characters from Street Fighter II. This is crazily inventive stuff and typical of a movie where anything – and everything – goes.

Eureka Classics presents the film here for the first time in the UK on Blu-ray.

For more on the film: https://www.eurekavideo.co.uk/classics/city-hunter