At least one person has hinted a couple of times recently that there are more pockets of people making very decent music in 2017 than there ever has been in the UK.
This is a good thing.
So can it now become acceptable to hold up a hand or two and confess that some of these bands that perform alongside many of our favourites at festivals such as this are totally unknown to some of us?
As of now this isn’t a crime (if it ever was of course).
Bonobo, Bombino and Banfi for example.
Three bands quite high up on the bill that everyone else knows about except us.
Because some of us like a night in now and again.
And we still can’t put that Idles album down.

Therefore, as much as we like to run around seeking out more new bands to tell you all about that may potentially one day enlighten your lives and get you on your merry way towards a future obsession it’s too hot today and we’re broken before we begin.

It’s Sunday.
The day after Saturday night and we’re rolling around on the grass just after lunchtime complaining about having drunk too much already today, the night before and quite possibly for the rest of the day ahead. Therefore we are also attempting to tread lightly on the grass beneath our feet as we hold on tight to the short list of bands we know and would like another look at and the long list of bands that we don’t know anything much about at the present time.
Such as Bonobo, Bombino and Banfi.

There’s loads going on around Victoria park on this hot humid Sunday afternoon and to begin telling you about every little sound that’s emanating from every nook and cranny here today would be impossible and dishonest. We’ve read the blurb on many of these acts web sites and like what we hear and we like the bits we manage to catch a glimpse of but we’ll have to get back to you another time on some of this or alternatively just copy and paste what’s already been written.
We’ll stick with the former if you don’t mind.

One of us wanted to tell you more about the fantastic SHE DREW THE GUN but we couldn’t get into the tiny bar/shed/tent they were playing in. A huge queue snaking around the trees and picnic tables made us wonder if people really were queuing up to see this North West English politically minded band we could just about hear as the sound floated over the fence before some of us conceded defeat and went for another pie.

Or were people hoping to get inside simply because very soon Everything Everything were about to spin some tunes?
90% of people were never going to get inside this place we’re sure and if they did we wonder if they really actually knew what they were attending.
Or did it take to everyone’s fancy simply because it looked like it was about to chuck it down all of a sudden?
We never asked so we’ll never know.
This may have been our one and only failure of the day but it meant we could test out the discipline we set ourselves at a young age .
One should never queue up for anything at a festival.

Not that we’re encouraging pushing in but this gave us a chance to remind ourselves that at festivals there will always be a plans B to Z to fall back on in any category.

LUCKY CHOPS were getting the crowds dancing and waving their arms in the air early on with their happy go lucky brass assisted cover versions (apparently) and VESSELS were gently pulling in punters eager for an early dance at the other end of the site which was a convenient place to start in order to casually wander five minutes over to the left and see our favourite queen of politically inspired tunes NADINE SHAH. 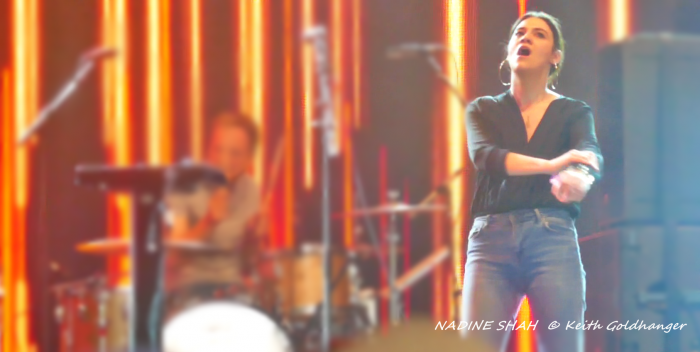 Nadine’s new tunes are even better than the previous ones we’ve been agreeably tapping our toes to over the past half decade or so. It feels as though we’re getting a new tune to digest from her every week at the moment and each one we get is a joy to listen to. The new line up (and the same one we witnessed at Glastonbury a few weeks ago) seems to flourish more once the older tunes are out of the way giving the songs from her forthcoming (3rd) album Holiday Destination the additional bite that these songs with a hard and strong message need. Another superb but short set leaves us keen on getting a full show under our belts before the year ends.

HOO HAS are rounding off the day for those lounged around the cushions and pouffe’s in the Sunday Papers Live tent that they share today with the wonderful organisation Sofa Sounds. This tent has been hosting speeches and Q&A sessions during the day for those not prepared to stand in the sun and try to make head or tail out of the acts on show across the many stages we have available at Citadel. There’s also the Science camp a few feet away from here providing punters with scientific demonstrations that at first glance looked like an introductory course for any middle aged folk considering Breaking Bad.

Sofa Sounds are worth investigating if you’re unaware of them. In a nutshell this is an organisation that arrange (and film) low key shows in obscure but accessible venues featuring superb bands who often perform in a more stripped down way than some of us are used to (look them up https://www.sofarsounds.com/).

MICHAEL KIWANUKA is playing a selection of tunes from his fabulous two albums that everyone around the Communion stage seems to be singing along to. This is a fabulous performance we’re treated to here as the sun begins to disappear. We’re witnessing an outfit that can entertain at this time of day as well as Elbow are capable of and it is just the type of performance we need to calm us down a little before the short stroll back over to the opposite end of the park for the immensely incredible FOALS who treat the huge crowd with over an hour of intense, loud familiar tunes.

The sound is crystal clear and possibly the loudest we’ve witnessed in this field over the years. A performance that may be regarded as one of Victoria Parks best in recent times unfolds as songs blend into each other twisting turning and never really giving us time to catch our breath .
We have a band here that must surely be contenders for some future stadium and festival headline appearances. Glastonbury headliners before the decade ends would be a suitable indication of where the band may now be sitting in the grand scheme of things at the moment. Songs from their debut album ‘Antidotes’ sound as fresh and epic as when we first heard them, we get the obligatory headline band glitter cannon at the end by which time Yannis Philippakis is standing on the shoulders of this massive crown that stand and dance before him. The drums thundered, the guitars twist and twinkle and the audience….well the crowd are certainly on their side and certainly witnessing one of the most euphoric and powerful headline shows this field has seen for a while.

The third year of Citadel has been loud, laid back, glorious, celebratory and hot. We could have seen more and we’ll keep hold of the list of unseen acts for future reference.

How could anyone leave this field without feeling exhausted and euphoric at the end of a day that gave us far too many options than some of us could handle ? Most acts that were passed nonchalantly as we wandered from stage to stage appeared to have a good proportion of attendees paying attention. FOALS headlining this event had pretty much everyone’s attention.

And what a memorable performance we saw.

There’s not much more we can ask for on a warm Sunday afternoon really is there?

*give or take a word or two it’s a Smiths song.