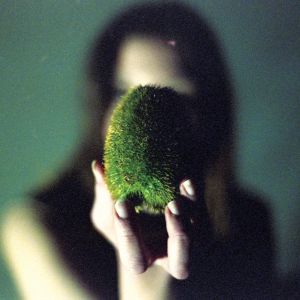 Open yourself and reconnect with the grandiose experimental vision and dark optimism of Haley Fohr’s Circuit des Yeux.

Young Chicagoan Haley Fohr has been making experimental “emotional vomit” in a bid to reconnect people as Circuit des Yeux since 2008. During that time, her work has noticeably increased in confidence and clarity. Tired of using just her voice and guitar as weapons against abusive audiences, 5th album In Plain Speech is her first recording endeavor with a full band. Cooper Crain worked on 2013’s Overdue, and rejoins Fohr alongside Kathleen Baird, Adam Luksetich, Rob Frye and Whitney Johnson on a diverse selection of instruments including flute, bass clarinet, viola, mbira and bicycle (yes, you read that right) in addition to the standard guitar, bass and drums.

Fohr’s music is the somber solitude of confined spaces, but it’s also “the small crack in the wall” where “the light births through” from In Plain Speech closer In the Late Afternoon. Her disarmingly strange, resonant baritone is like the mutant offspring of Diamanda Galás, Nico and Scott Walker, and the avant-folk instrumentation is irregular and ominous even when the song subject matter is uplifting. Taking this into account, I’m a firm believer in the healing powers of darkness, and it seems Haley Fohr is one of the few artists around who understands my isolation and longing for meaningful friendships and lasting love in life. So what I admire most is how Circuit des Yeux challenges the modern day disconnect by directly addressing the listener, and the results are sometimes jarring and even frightening, but always inescapably powerful.

In Plain Speech begins with Kt 1, an amorphous electronic flutter of flirtatious flutes like an 8 bit butterfly kaleidoscope migrating to a virtual Arcadia. From this bright yet murky world the austere arpeggiating synths of first single Do the Dishes jerkily rise. It is a mantra against the mundane; Haley Fohr’s classically trained vibrato reassures us of our value and the importance of taking risks even when we seem stuck in a depressing cycle (“There is something deep inside of you / something worth reaching into”). The extremely personal video shows Fohr performing routine tasks at home, including her daily workout where she runs naked on a treadmill. Do the Dishes exemplifies the strengths of Circuit des Yeux. You can hear the disorientating loops cutting in and out like the blades of a ceiling fan in slow motion before the song climaxes in an urgent viola orgy. The inventive arrangements build tension until they burst into a beautiful purifying drone, then comes the meditative afterglow with a minimalistic sigh of strings.

We are roused from this melancholic contemplation by the unsettling drama of Ride Blind. Fohr’s keening wail is like the chant of an orator in some secret church, growing in intensity and ricocheting off the tall stained glass windows that line its gothic aisles. She could be the high priestess of an occult; such is the hair-raising potency of her doomy voice.

Dream of TV is a scrambled Technicolor utopia of steady string plucks and chimes twinkling in and out of the speaker channels like chasing fireflies. Amidst the spiky electronics and chirruping flute, the percussion amplifies almost violently and is lifted by Haley Fohr’s sonorous cry. The intermittent gong strikes and atonal distortion crashes of instrumental Guitar Knife are soothingly rhythmic, and again reinforce the meditative, self-aware experience of Circuit des Yeux.

Fantasize the Scene is perhaps the most accessible offering of In Plain Speech, a daydream about forever friendship, and yet it still sounds ghostly. At the end of the video, the prospective pair exchange phone numbers on paper scraps and immediately jointly lose them, highlighting the painful clashes of hope versus reality when forming relationships and mourning the fleeting, transient nature of most human interactions (“Once the rain has washed away every footprint you have made / Once the wind has blown through every word you spoke”).

The pastoral folk of A Story of This World is In Plain Speech at its most mellow and gives the listener a breather, although Fohr’s shrill yodel keeps things impassioned and involving. A final brief instrumental follows which feels simultaneously shiny and cold, and then In the Late Afternoon’s intimate, light patter of strings reinforces the notion of hope. “Wake up / wake up / it’s never too late”, Fohr implores, and for awhile I believe her that there’s time for change and that it just might be possible to actually reach someone.