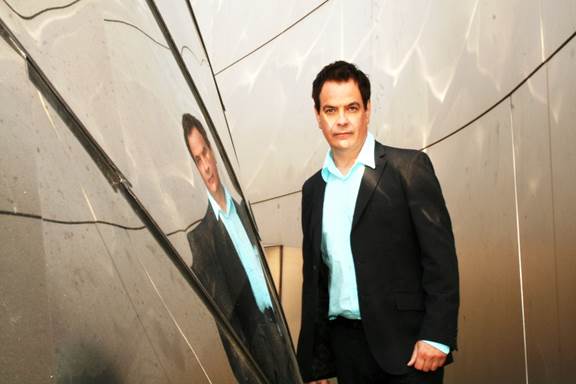 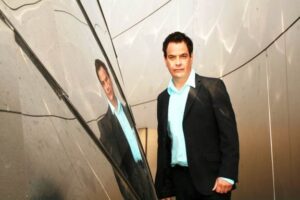 Cinerama, David Gedge’s ‘other’ band, are set to release a brand new album, ‘Valentina’, on the 18th May via Scopitones. Best known as the guiding force in indie rock legends The Wedding Present, ‘Valentina’ is a radical reworking of The Wedding Present’s eighth studio album, released in 2012 to critical acclaim.

Harbouring a long-term dream to record one version of an album as The Wedding Present and another (with reworked songs) as Cinerama, David’s initial plan was to release two albums simultaneously but soon realised that this was a project that would take many years to accomplish. So after deciding on using ‘Valentina’ for this ambitious project, the decision was made to stagger the releases to complete the complex arrangements involved with the Cinerama version.

Orchestral and cinematic in sound, ‘Valentina’ still maintains the classic pop sensibilities in which David Gedge and The Wedding Present made their name. Inspired by his love of film scores and classic pop music, the album is unfettered by the traditional wall of raging Wedding Present guitars. From the first blast of horns to the last twinkle of piano keys, the record sparkles; a total departure from the original version, as David intended it to be.

From album opener ‘You’re Dead’ with its delightful, easy listening lounge feel to the up-tempo, literate pop of ‘Back A Bit…Stop’, carefully crafted lyrics and delightful vocal melodies blend effortlessly; part orchestral, part big band setting. Gedge shines in his alternate guise as a chanteur – his personality, poetry, vulnerability and resilience evident on such tracks as the piano ballad ‘Mystery Date’ and the baroque pop of ‘Deer Caught In The Headlights’.

He recruited Spanish indie legend, Pedro Vigil, to assist with arrangements and add some Las Vegas style swagger to the record. Recruiting musicians from his local area of Asturias, the album was mixed in the picturesque town of El Puerto de Santa Maria with another legend… Paco Loco. Paco, in an impassioned dinner time speech, declared David’s voice on the record to be one of his ‘favourite vocals ever’.

Forming The Wedding Present in 1985, the band released 5 critically acclaimed albums over the course of a decade. Loved by the British music press, they caught the attention of John Peel, who said: “The boy Gedge has written some of the best love songs of the rock’n’roll era. You may dispute this, but I’m right and you’re wrong!”

With songs typically based around drums, bass, guitars and Gedge’s vocals the band was never afraid to experiment, even recording an entire album of Ukranian folk tunes called Ukrainski Vistupi v Johna Peela. They also displayed a taste for TV themes and film-score music, recording covers of the themes from Shaft and Twin Peaks among others.

Putting the band on hold in 1997 to concentrate on his new project, Cinerama, Gedge elected to take a different path musically. Together with his then-girlfriend Sally Murrell and Wedding Present co-writer Simon Cleave, he went on to record three breathtakingly good Cinerama albums and celebrate them with multiple live tours until The Wedding Present ultimately returned in 2004.

Cinerama, complete with 12 piece band, strings and additional instrumentation, will be performing a special one-off show at the O2 Academy Islington, London on Saturday 6th June.