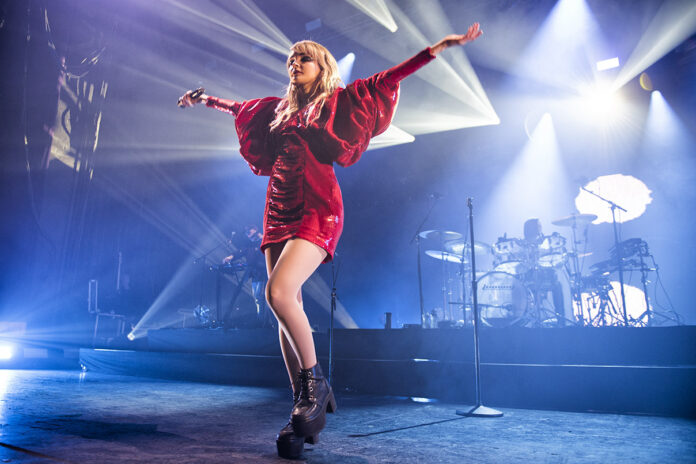 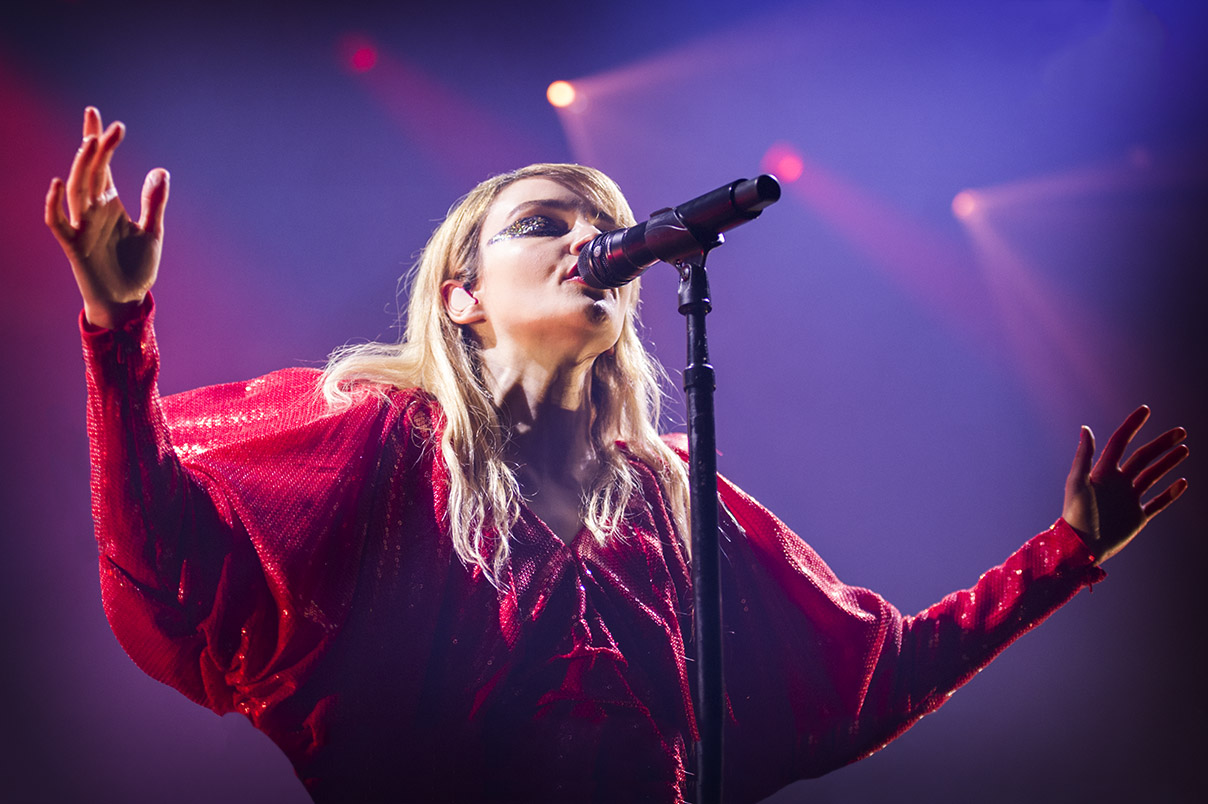 Chvrches blow Manchester O2 Apollo away with an electrifying performance, as they celebrate the launch of their latest album Screen Violence. Lucy Shevchuk reports back and Melanie Smith takes the shots.

There’s something about being in a crowd, in the cloud of sweat particles practically fused to the person next to you. For Chvrches at the Apollo Theatre, I choose to swap my usual sweat-box preferences for a seat in the top circle. I walk towards my seat whilst being greeted by a vast open cave-like space. The room itself is a bewildering mix of old-theatre aesthetics with a modern twist.

London based trio High School start the night off perfectly with their catalogue of mysterious and dark music. High school are an eclectic and interesting mix of goth, pop, rock and new-wave, reminiscent of bands such as The Cure, New Order and Joy Division. While they pertain to that classic Manchester sound, they are in no way replicating it. They have a brooding and atmospheric quality with heavy pulsating beats and aggression that make for a captivating performance. 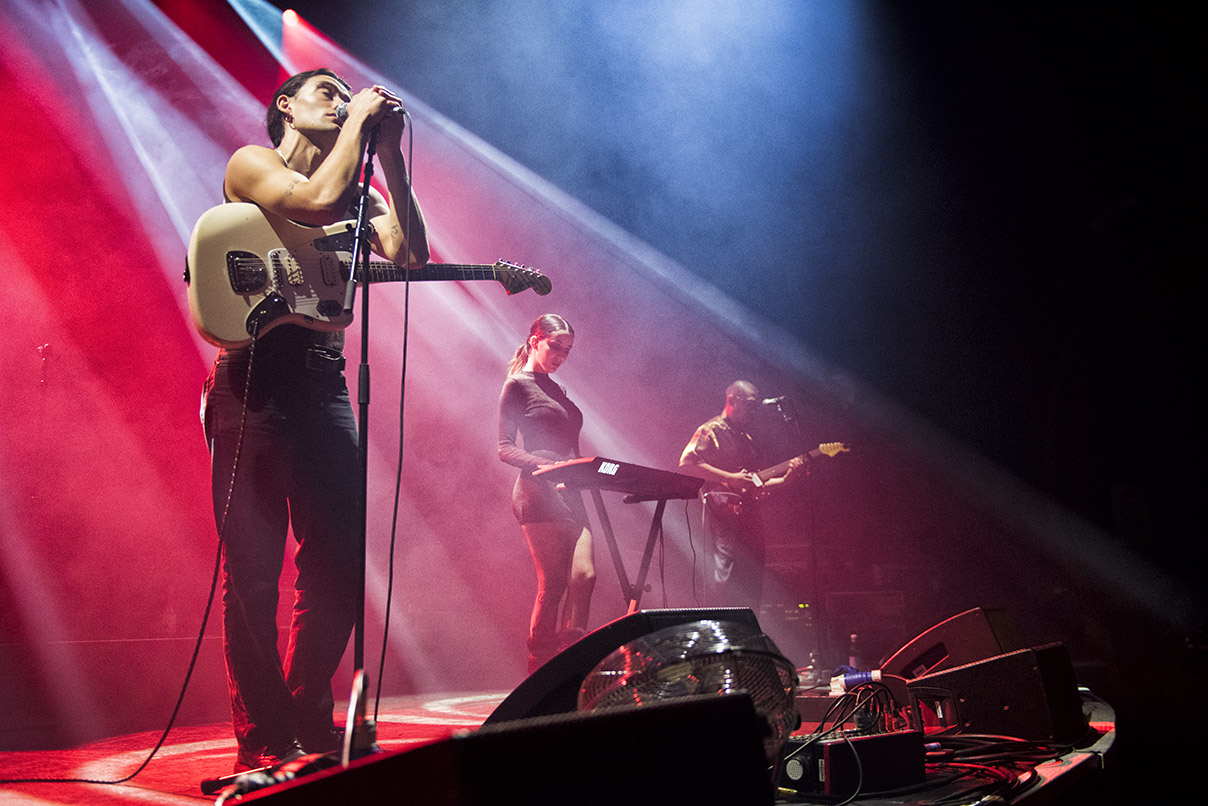 The stage set-up is simple. The drums, synth/keyboards are elevated into a line at the back of the stage and subtly lit at the bottom. The set-up dramatically turns into a mind-blowing display of lights. Blue beams fully light up the instruments as a thunderous beat echoes its way throughout the room. Cinematic and eerie synths permeate the vast space whilst the audience becomes restless, ready for Chvrches entry.

In classic Chvrches style, the lighting/video effects are breathtaking. This, paired with the epic-ness of the room itself makes for an awe-inspiring spectacle. A huge screen lights up at the back of the stage that bursts into life with static-like effects. They beautifully transition into He Said She Said followed by one of their most popular tracks Forever. Lauren’s voice is crystal clear. Considering how layered Chvrches music is with multiple synth pads and electronic sounds, she shone bright and bold. She commands the stage with calm confidence and charisma, never bending into cocky or in-your-face. Lauren dances with a childlike joy, making use of the space she’s given. It’s hard to take your eyes off someone who radiates positivity, passion and fun. She says herself that she’s powered by paneer for the night. I wanna know what was in that paneer. Her energy is electric and she is down-right hilarious too. 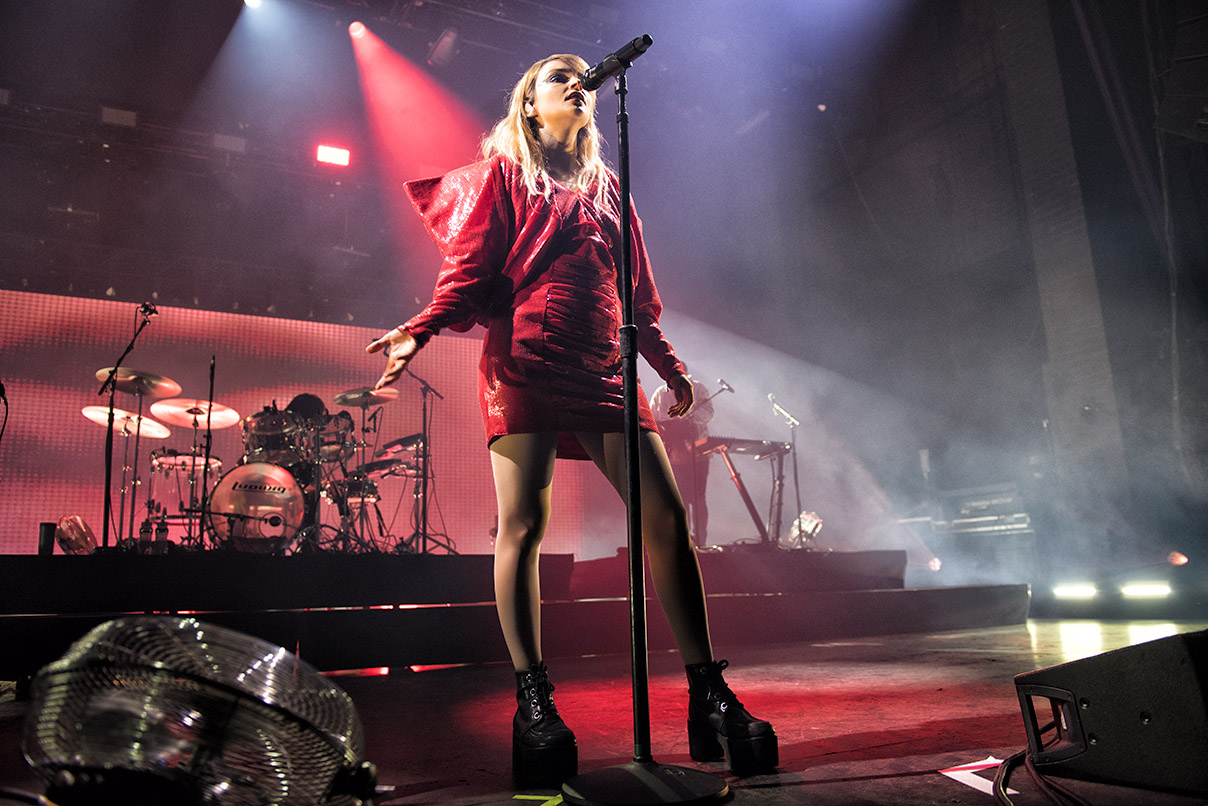 Chvrches play an array of songs from their newest album Screen Violence that are as well received as the older hits. Perfectly synced light shows dazzle the room in numerous different colours, shapes and forms. The screen behind the musicians acts as a narration to each track. You become part of the music, transported into every world they create. The most beautiful display of which comes in the form of a figure floating in water for the track How Not To Drown. The room fills with resplendent green and blue lights as the audience watches in wonderment.

Chvrches are a synth pop outfit with electronic elements and catchy pop melodies in abundance. A kind of power, darkness at times, alluding more to what you’d find with Rock/Metal bands leaves me surprised. The song Science/Visions makes me head-bang as if I was listening to Rage Against The Machine. A wall of sound with resounding beat blasts through the airwaves and the bands movements intensify.

These guys are some multi-talented musicians. I can’t count the amount of instrument changes happening. Jonny Scott holds the beat perfectly and experiments with sample pads simultaneously. Martyn Doherty swaps between bass, piano, guitar, sample pads and backing vocals. Similarly, Ian Cook also displays his multi-instrumentalist skillset throughout. Chvrches are indeed a cluster of multiple skill sets and influences. In summary, every song is a banger containing at least an almighty crescendo, a blustering chorus, an infectious melody hook or a canorous beat. Consequently, this results in a mind-blowing light show that transports you to a Tron-esque digital world. This band is not to be missed, they are a sensory marvel. 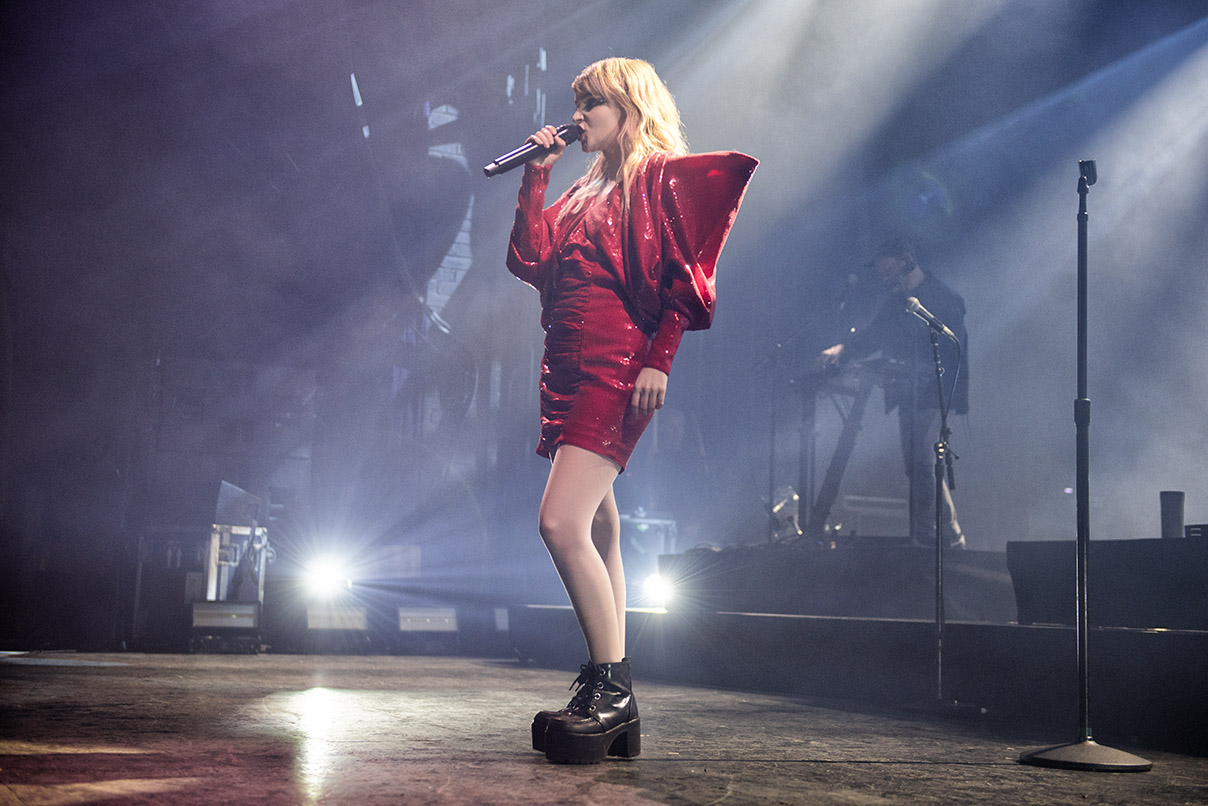 The band naturally exude genuine and down-to-earth energy. Unfortunately, some idiot decides to get aggressive and start a fight after the track Miracle. Classic Manchester behaviour, right? Anyway, Chvrches were not having it. Diving off the stage, Martin goes to confront the culprit himself as Lauren calls him out. It’s great to see the band members stick up for the fans. We’ve had enough shit these past two years, we are here to have a good time Lauren says, followed by the crowd bursting into applause. You tell em Chvrches. This doesn’t affect the mood in the slightest. Lauren disappears off stage and returns covered in red paint/blood. Taking a centre spot, a powerful and mystifying image is created before blasting into The Mother We Share

Chvrches burst into The Mother We Share and the venue explodes. Attendees in the seats around me jump up to dance as the floor bounces with them. This song arguably is one of their best tracks and the reaction of the crowd shows exactly how much the fans love it. Ending on Clearest Blue with the audience in full cry, they close the show. I leave the room stunned at what I’d just experienced. Chvrches are one of the best live bands I’ve seen to date and I strongly suggest you catch them as soon as possible.

Words by Lucy Shevchuk. More work by Lucy can be found at her author’s profile