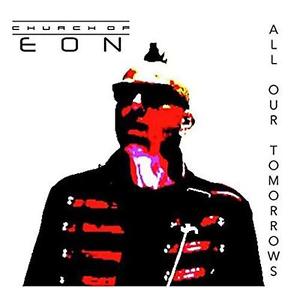 Church Of Eon – All Our Tomorrows

Nic Austin (now back in the current line-up of Chelsea) was arguably responsible for their best recordings in the 80s and 90s, with 1982’s “Evacuate” album probably being the pick of the lot, a fine record. He also formed the ill-fated, “great on paper but never actually making it to record”, Bandits At Four O’Clock with Steve Kent of the Business.

I’ve recently wrote a lot about Chelsea (perhaps too much for any sane person ha ha!), so I think we’ll leave the past aside now and any reservations about “old punks making new records” too. Let us concentrate on the here and now with Nic’s new band Church Of Eon who put this LP out last year though I’ve only just got round to hearing it.

That was a bit of a bish on my part as it is sublime. A tasty confection great to listen to on a hot summer afternoon in fact. Not full on, no-holds barred Punk by any means, in fact CoE sound more like they have re-booted Power Pop for the 21st century by crossing it with glacial keyboard lines and even some (gulp) “dance” elements. There are plenty of Nic’s trademark flashy guitar lines and memorable choruses, but with a natural ebullience and energy of its own as well. Occasionally the frantic pace lets up – the long “Eon Parts 1 & 2” has a slow, gentle intro, kind of like film music, full of atmosphere. Then it goes into a repeated vocal, thrashing guitar yielding a restrained power, plus a stepping rhythm – it works well.

But the Church of Eon really work best on the more up tempo and exuberant efforts that make up the bulk of the record. Opening track “Died And Gone To Heaven” has a kind of “fairground organ” sound that overlays a killer hook-line. This sets the tone for what is to come, the title track melds a little of “Evacuate” to a rolling, insistent groove – difficult to explain but it just works really well. There’s a hint of regret that runs through the material like most classic power pop, the yearning for that time, when the sun shines, the unrequited love for the girl/guy of your dreams, the beautiful day in your youth you hope never ends. I know the songs don’t necessarily say that, but that’s just how that sound feels. “All That Glitters” has a wonderfully crunchy guitar that gives way that kind of a free-wheeling, carefree effort. “Here It Comes” takes it right back to the kind of “end of the night” anthem, arms in the air, altogether in the music. There are many more uplifting tunes like it here and overall “All Our Tomorrows” is a neat piece of immediate aural pleasure. Great loud pop music, basically.

Influences dart around in the mix with C of E occasionally resembling the Psychedelic Furs a bit, first (and best) album Weezer and even a rocked up version of the Lightning Seeds in there somewhere. But really they have their own instantly recognisable signature sound, which works well in the course of this collection, but I suppose the next thing will be how will they move on from that with a second LP? Still that is something for the future and “All Our Tomorrows” is very much of the present. All things considered a pretty good start.