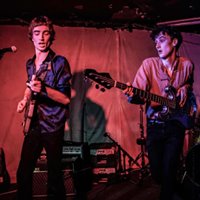 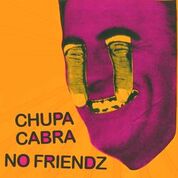 Two excellent bands for the price of one with the new split album from Chupa Cabra and No Friendz.

Although both the bands on this album are geographically distant, they both fall in the eclectic Trashmouth Records faction. Split albums are a great way to experience some of the newer bands on the scene. The Chupa Cabra/ No Friendz album is no exception.

Chupa Cabra hail from North Wales and have a punchy yet musically accomplished style. Their half of the album starts with the suitably brutal Sides Of My Skull. It features harsh vocals over a repetitive backdrop, which erupts into discordance at one point giving further definition to the vocal content. Continuing with Six Blues, a great concoction of crashing guitars and doomy rock to begin with, coupled with more fierce vocals. A really good track. Venice and Mars has already been released as a single. It is a stirring and is surprisingly sophisticated musically. That doesn’t mean it loses any of its impact, though. It has unusual rhythms and fantastic guitars making it a very special proposition. Plaster Cast is a crashing, car wreck of a track, with ferocious vocals. All I Know has more of a Chelsea Dagger feel. Its swagger is nicely topped by some fine acerbic vocals. The last Chupa Cabra track, King Leech, is out and out classic punk and none the worse for that. Argy-bargy of the highest order.

The No Friendz tracks start with Ballad. There is a 1950’s rock feel to a lot of the music No Friendz produce, with a sleazy, messy contemporary twist. Ballad has that excellent anarchic rock and roll vibe. A great romp of a track. It has previously been released as part of a split EP along with the next track, Bloody Love, which has a similar, almost kitsch vibe, with some rousing over-the-top vocals. I Saw Shonen Knife continues the sweltering rock vibe before the music takes a different turn with the slow, sultry Old Man Shiver. It has atmospheric vocals and a desultory air. Sometimes an irritating add on musically, the whistling on the track adds to the down-beat noir feel and is perfectly in keeping with the feel of the lyrics. Arguably the best track on the No Friendz part of the album, Hedgehog is a scorching piece of frenzied rock and roll. Beginning with an intricate guitar interlude, the band are soon tearing through the track at break-neck speed. With its ‘Doo Wop’ background vocals it’s a sweltering rock and roll romp. The last track, Don’t Make A Fuss starts with a spoken intro leading into a track that is far more punk influenced than anything else No Friendz have brought to the table. The drumming takes centre stage at times, driving through this aggressive and truly enjoyable piece.

Find out more about Chupa Cabra and No Friendz on Facebook.