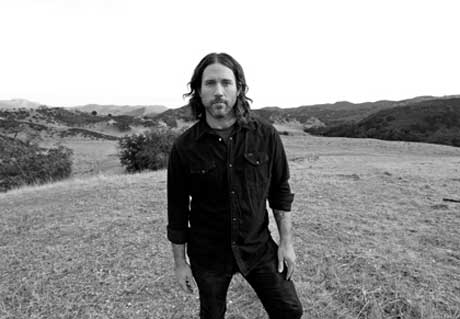 Chuck Ragan And The Camaraderie

We arrived a little late having lost track of time in a nearby pub that had nearly the entire Hot Water Music discography on its jukebox. We entered the building and burst into the hanger styled Gorilla venue, a stark contrast to the ritzy food place it was out front, and pushed our way through a plethora of plaid and facial hair. At the back of the venue there was a small upstairs area where it was possible to view not only the acts, but the entire crowd too. This seemed a good place to perch.

We focussed out attention on the stage and Northcote was already part-way through his impassioned set. Northcote is yet another in the multitude of Bruce Springsteen musical “offspring” with the exception that he does this well. Where others seem mere tributes to The Boss, Northcote has made the style his own and given it a fresh energy that seems truly genuine. There were plenty of collaborations, with Chuck making an appearance too, and this did wonders for the atmosphere of the evening. The idea that a gig should be rigid and uniform was always smashed to pieces when it came to a Chuck show, with musicians sweeping in and dropping out throughout the entire night. Though not particularly to my taste, never truly understanding the Springsteen craze, it is clear from the crowds reaction that this was an act that would create an ever expanding fan base to rival the top dogs of the “folk-punk” scene.

In a short while the evening truly began. Chuck and The Camaraderie took to the stage and instantly exploded into Til Midnight‘s début single ‘Something Mat Catch Fire’. Being backed by not just a band but a group of friends, as The Camaraderie surely were, gave an increased energy to the solo acoustic live show I was used to. It was as if Chuck was running on super unleaded. This positive energy seeped out into the crowd and even seemed to brush the cobwebs off even the most hoity-toity of the hipsters, with a few plaid shirts bouncing energetically towards the front. It was a terrible shame that Chuck could not see up into the rafters, as up there were two die hard fans who spent the entire evening air guitaring, Irish jigging, and generally having a bloody good time. There’s a strange phenomenon within the scene, of fans seemingly afraid or simply too stuck up to truly let loose. I saw it earlier in the year at the Manchester Lucero show and, though a slightly more enthusiastic crowd, the motion being reciprocated didn’t come close to matching the magic on stage.

The set did focus somewhat on the new record (and rightly so, it’s a beast of an album) but old timers were not left out. ‘Rotterdam’ ‘The Boat’ and ‘Let It Rain’ all found their way into the setlist and were given such a huge boost from their full band backing it felt as if they had finally reached their true potential. Drenched in sweat, to the point that Chuck’s shirt had changed colour, the band departed. I tried to air out the bad stench that had seeped from my pores before Chuck returned alone. He finished off the crowd with a tribute to his band Hot Water Music in the form of an acoustic ‘Drag My Body’ before the band returned for the one-two combo of ‘For Broken Ears’ and ‘California Burritos’. These final two seemed to push the final few dullards in the crowd into an ecstatic frenzy with singalongs and dancing throughout the closers.

Chuck Ragan’s website is here: chuckraganmusic.com. He can also be found on Facebook and he tweets as @ChuckRagan.

All words by Ian Critchley. More from Ian can be found over at his Louder Than War Author Archive.