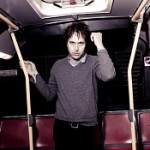 Ex Green On Red guitar player Chuck Prophet spends most of his time on the road these days. Louder Than War writer Joe Whyte recently caught his Amsterdam show & here’s his review.

I’ve been to worse cities for a gig, that’s for sure.

The Paradiso is a beautiful old converted church in a quiet backwater of Amsterdam. Well, quiet for Amsterdam that is. The stained glass windows and steep balconied sides have an almost Globe Theatre ambience and the venue’s stained wood floors are a welcome difference from the UK’s beer-sticky carnage. Prophet is in the upstairs cloisters room and it’s packed out.

Chuck Prophet is a bit of a legend around these parts. As whizz-kid guitarist with notorious hellraisers Green On Red, he contributed to a string of seminal albums before they spectacularly imploded. He’s since been ploughing his own furrow, being the go-to guitarist for a heap of Americana artists, releasing his own solo material and touring endlessly.

Last year, he toured Europe playing The Clash‘s London Calling in its entirety, for no reason other than that he’s a fan. Check out a track from this tour from YouTube below, it’s startling.

Prophet is currently promoting new album Temple Beautiful, a paean to San Francisco, his adopted hometown. Tonight’s set is mostly drawn from the album and his band, The Mission Express, including partner Stephanie Finch on keyboards tear into the songs with abandon.

The title track, he tells us, is about a punk club of the same name where he witnessed his first live show. It was also, in a previous incarnation, the base of notorious cult-mass-suicide-leader The Reverend Jim Jones. No, not that one. (Ed – link embedded is “that one”, i.e. not the correct one!)

White Night, Big City has the crowd singing along although I’m not sure how much of Prophet’s rambling introduction the Dutch understand. They seem happy, anyway.

The set is led by Prophet’s searing guitar and it’s no wonder that this is the man, rumour has it, that The Stones tried to entice at one time. What’s not rumour is the fluid, sinuous lines emanating from Prophet’s telecaster. The interplay between him and James DePrato (who at one stage wields a double necked guitar, oh yeah that’s what I’m talkin’ about!) is telepathic and one can tell that this is a band who’ve been round the block.

The songs are a mixture of soulful ballad and Springsteen-meets-The Replacements rockers. Prophet has a certain way with lyrics and the wit of his writing shines through the excoriating riffage of Castro Hallow’een.

I’m not much of a fan of The Boss, but Prophet’s slashing version of For You is extraordinary. A garage rocker in the truest sense. The new album features Roy Loney of The Flamin’ Groovies on the title track and it’s fitting that Prophet and band sign off with a chiming version of Shake Some Action. An encore of co-write (with other SF punk-era legend Alejandro Escovedo) Always A Friend seems appropriate given it’s heavenly harmonies and the celestial venue.

A Prophet in a strange land? Not if the triumphant reaction from tonight’s crowd is anything to go by.

The latest album by Chuck Prophet can be streamed in full (but sadly not embedded) from soundcloud. So if you want to hear go here

More info about Chuck Prophet can be found on his website here.

All words Joe Whyte. More pieces by Joe can be read here