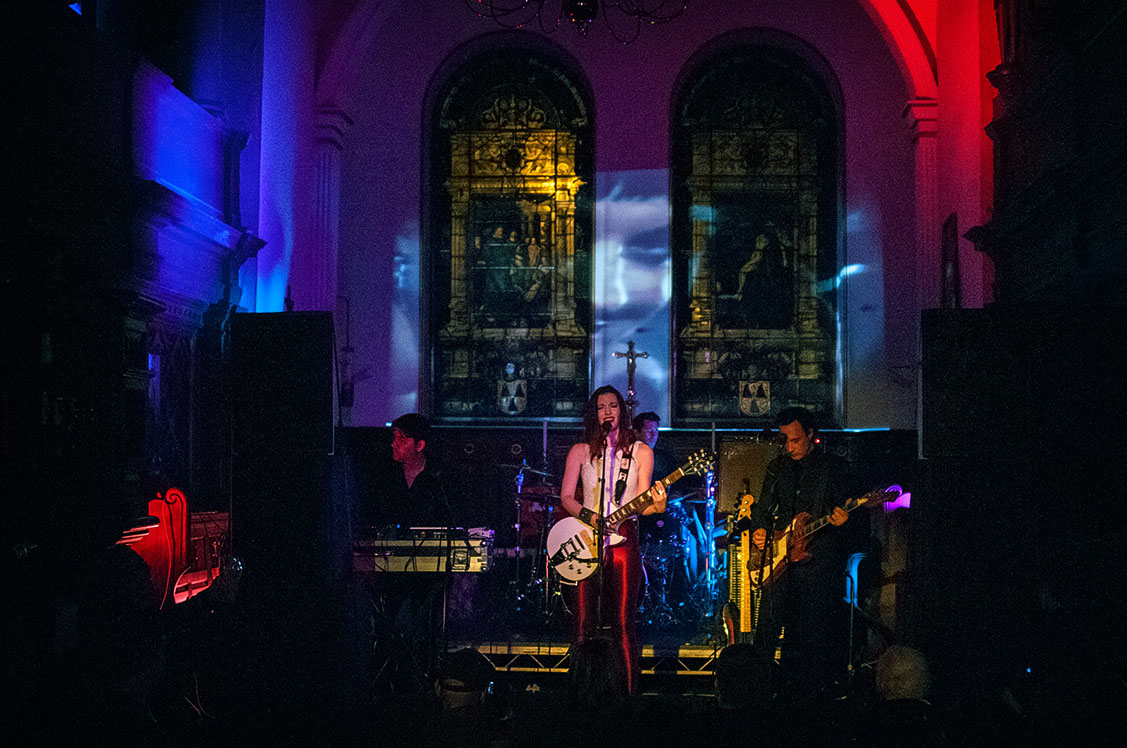 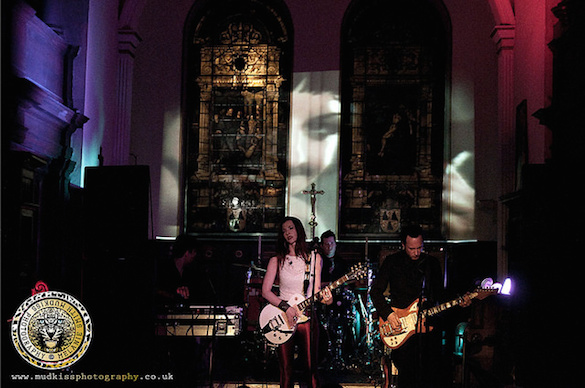 Chrysta Bell is a little bit of an enigma, her Wikipedia page is only 3 lines long yet she started making music many, many years ago. She is the muse of critically acclaimed director David Lynch, who helped produce her album This Train, which was re-released earlier this year. Her music is almost indescribable. It seemed only apt that she’d choose to play at one of the most intimate venues I’ve ever been to – a church.

Before the gig I hadn’t really heard of Chrysta Bell before. She really was a bit of a mystery and after listening to a few of her tracks I struggled to understand how her sound would translate into a live setting. The venue she picked was The Sacred Trinity Church on the edge of Salford, it was unlike any shows I’ve ever been to before. The place was tiny yet grand, with beanbags and pews scattered around. I was told that people normally sit down for the gigs here. There was an extremely graphic event going on – Encountering Corpses – so we were surrounded by macabre pictures and images. 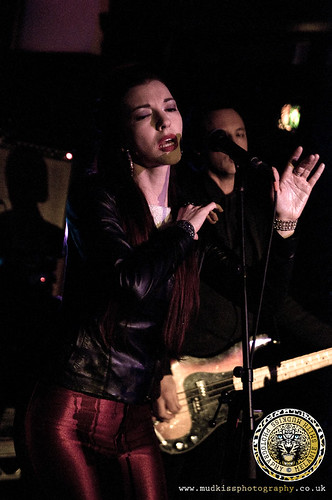 After waiting for what seemed like an eternity, the support came on, a band called Candy Says from Oxford. And what a support act they were. They used an eclectic bunch of instruments – an electric accordion, a whole bunch of unusual percussion, a cowbell. They were a very harmony driven band and their sound, which had elements of bands like The XX and Architecture In Helsinki, was drenched with saccharine indie pop charm. It was so precise and catchy that it was impossible not to fall for them. Their sound would have easily translated to a much bigger stage and their lead track, Not Kings has been stuck in my head ever since. They’re definitely a band that I’ll be following closely from now on, and I look forward to seeing them live again. And I sincerely hope that they get to meet Chad from Dark Furs, after whom they’ve named one of the funniest tracks I’ve heard.

It really is difficult to know what to say about Chrysta Bell. She probably summed it up best herself. Midway through the gig, she joked about how this next song was what they hoped would be the next James Bond theme. But I couldn’t get that thought out of my head – that really was what the gig was like. A projector was playing images of flames behind her and her band and it helped that she really was drop-dead gorgeous. She slinked sensually about the stage, staring each and every audience member in the eye as she graced us with songs that oozed sex and beauty.

In many respects it felt like Chrysta was giving a sermon and that we were her disciples. It didn’t really matter what the lyrics to the songs were – the entire audience were silent and eagerly anticipating the next note to fall from her lips. Her band were reserved, allowing her to take the limelight but that’s not to say that they didn’t play impeccably. Heavy basslines vibrated the walls of the church and offered a stark contrast to Chrysta’s vocals. Title track This Train was atmospheric, hypnotic and full of sex and danger while one of the final tracks, Swing With Me really showcased Chrysta Bell at her finest, a real Texas blues song and possibly the highlight of the gig.

The show was hypnotising and dreamlike. Occasionally Chrysta would regale us with a darkly comic tale about the natural graveyard she owns back home in Texas – all of which only served to highlight the Lynchian nature of the whole thing. Dark and moody and brooding, Chrysta knew how to tease and surprise us. She picked up a guitar for a couple of tracks, showcasing her talents as a musician as well as a singer. If I was forced to compare her sound to anybody else, it would have to be a mix between Nick Cave and early Goldfrapp. Truly something that must be heard to be believed.

All in all, this was an incredibly special gig and I felt privileged to have been able to witness it. It’s an experience I would never forget, and if the elusive singer is ever playing near you, I wouldn’t think twice about getting a ticket to see this beautiful Texan songbird.

Words James Lowther. More writing by James can be found at his author’s archive. Photos by Melanie Smith whose website is here.