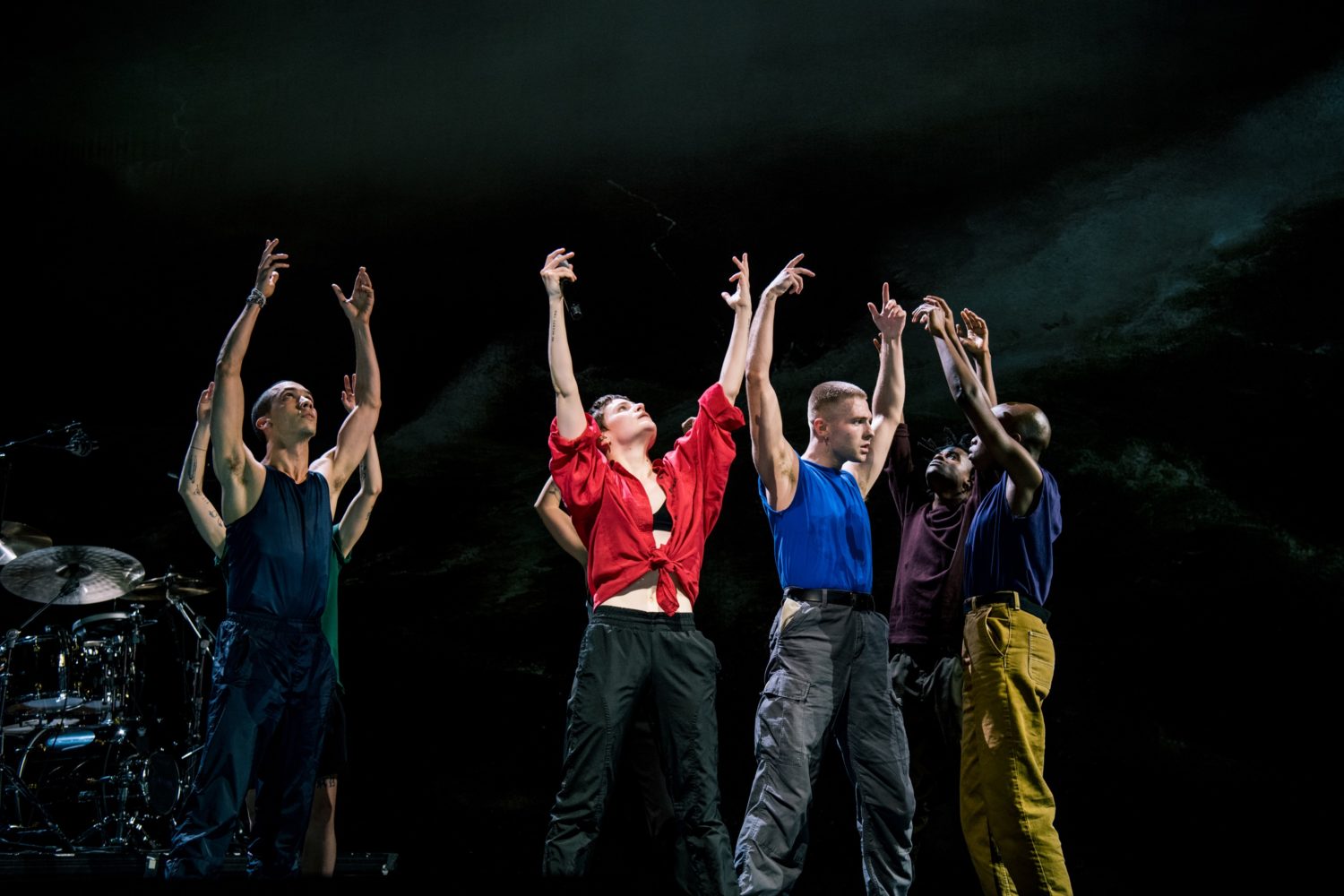 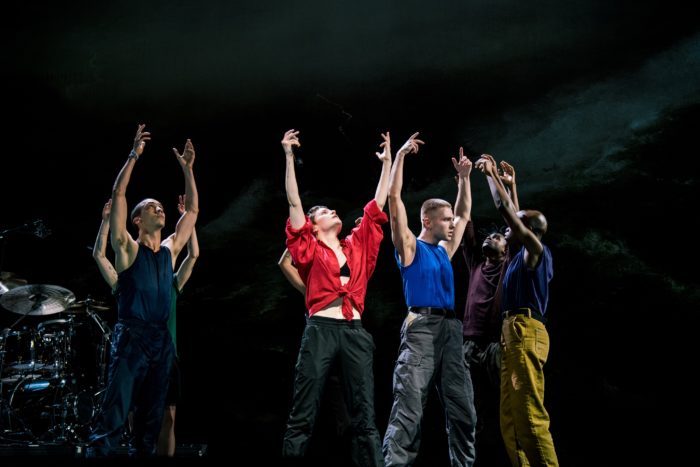 David Edwards witnesses an extraordinary combination of music, dance, theatre and empowerment from the Christine and the Queens Manchester Apollo show that redefines the concept of what a live show can involve, delivered by the perfect pop star for this fractured era

When we lost both Bowie and Prince in rapid succession during the ever-circling storm of desperate news that blew through 2016, it was common to hear remarks such as “we don’t have many true popstars left”. And it was a comment you could understand – for those who understand the importance of pop icons being a touchstone for the alienated, the marginalised and the lost, the departure of two artists who embraced their own unique weirdness in such incredible and inspirational ways was hard to accept. And when combined with the changing political narrative of 2016, it seemed for the first time that the galvanising voices calling out to the fringes of the cultural maps was fading into the background of noise and confusion.

But when we lose, we start anew. When we fall, we stand up again. And in the absence of heroes of the past, it is our duty to discover new keepers of the flame. And whilst Héloïse Letissier would understandably baulk at comparisons to past artists – she is fiercely and definitively her own creation – she is cut from a similar star-flecked, chameleonic cloth. And tonight’s show is thrillingly unique, utterly original and a genuinely call-to-arms for the disaffected and those searching for a voice.

Tonight is a crossroads intersection of pop gig, theatre show, dance performance and motivational speaking event. And it is spellbinding. For opening track Comme si, her dancers are arranged on the stage as if hanging out on the street. They interact, they react to each other, they dovetail and spin gyroscopically together. Letissier joins us to astronomical cheers from the audience. Dressed in a red shirt that billows open and that she clutches continually until you expect it will tear at any moment, she has the most astonishing energy and control – continually moving, continually singing without missing a single beat. Girlfriend already sounds like a modern classic – full of funk and groove, sexuality clashing with a taut, elegant set of beats. Her four-piece band are muscular and tight whilst the dancers appear to be interplaying the idea of sexuality being a fluid construct – the men sensual and delicate, the women forward and strong. And then suddenly switching back again until each are almost interchangeable. 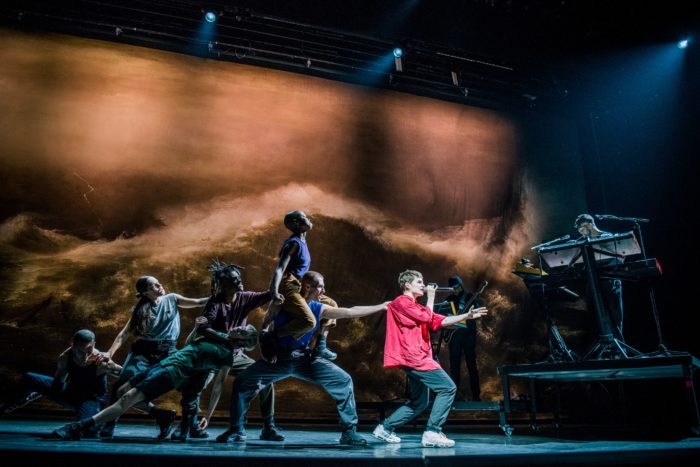 In a similar way to Kate Bush’s incredible 2014 Hammersmith Apollo shows; Christine and the Queens’ live show appears to want to entirely reinvent the concept of a live gig. Why posture with blank forward faces and predictable instrumentation when it is possible to make a live show something more – something striking that considers art, dance and theatre as being entirely correlated with pop music? If this sounds pretentious, then this is my fault for not being able to express myself clearly. Because when seen live, it makes absolute sense – music and performance interwined. Before Goya Soda a cascade of fake snow drifts down from the stage roof whilst Letissier and one of her dancers engage in a tender, sensual dance whilst other trails a green flare. And for the rest of the show, the dancers trace footprints in the snow as it lies on the stage. It is strikingly beautiful.

The self-belief needed to do a show implies utter confidence in one’s abilities, but Letissier’s stage banter is all about the discovery of herself, and the long journey to get to where she is tonight. You almost feel that this is the story she has told herself over the years during the darker times – to conquer her doubts and truly become herself. And now tonight she is finally in her playground – she has become everything she wanted. And it clearly resonates. She is cheered wildly whenever she speaks. People (men and women) should out proclamations of adoration from the crowd, which she entreats with utter charm and grace. She is funny, she is engaging, she is profoundly touching in the way she speaks about overcoming the odds and believing in one’s self. And the most striking part is that you believe every word. This is not a series of empty platitudes, covered with cliché. When she speaks, it is almost like the barrier between the crowd and the artist comes down. She tells us tonight is a safe space, a place where we can be who we want. And we believe he; we revel in it. 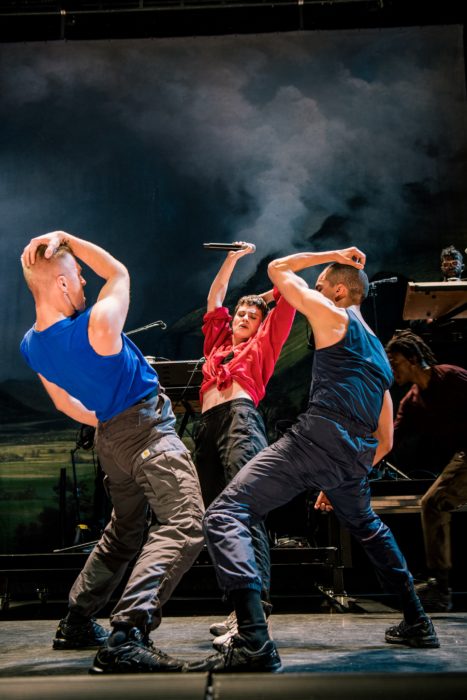 None of this would matter if it wasn’t for the songs. And the songs are glorious. The songs from Chaleur Humaine are already sung back word-for-word including the French sections, which leaves Letissier looking shocked and delighted. Tilted still sounds like the most rare and remarkable pop song of the last few years, whilst the sweet sorrow of Nuit 17 à 52 is delivered as an acapella: shimmering and naked against the black of the stage. And combined between the melancholy are their upside-down partners from the new record Chris – 5 Dollars, Damnn and Feel So Good having the swagger and funk of Prince and Dangerous-era Michael Jackson, all the while playing around themes of gender and sexuality.

There is a moment, after a gorgeous and sweeping rendition of The Walker where Letissier leaves us with a quick goodbye – a farewell that seems so at odds with the intimate relationship of the show that it seems impossible that this could be the end. And of course, it is not. Before we know it, she emerges from the side door of the upper circle to serenade the crowd from the balcony. By now the shirt is fully off and she waves it in the air as the crowd cheer and acclaim as she gives a stripped back, sorrowful Saint Claude – emotion choking her voice. She then disappears into the crowd at the front to lead her dancers back through the stage from the back to the front (singing all the while) during the final closing Intranquillité. It is ten minutes of remarkable intimacy – the fourth wall being shattered into small pieces and the artist and the crowd becoming one and the same. Though you marvel at her extraordinary abilities, her wonderful songs and her striking self-confidence, what truly makes Héloïse Letissier an incredible modern pop star is her ability to make you feel an integral part of everything that is going on. To make you feel welcome in her world, to reflect your own feelings and to wrap you up in a cloak of shimmering, gorgeous communion. There may come a time soon where Christine and the Queens outgrow venues of this size and that will be a new challenge – how can you maintain this closeness when addressing twenty thousand people in an arena?

But frankly, you wouldn’t put anything past Héloïse Letissier. We steal off into the night in murmurs of joy and bewitchment, knowing that we have been witness to a truly remarkable visual and musical experience. Héloïse Letissier is not Bowie, nor is she Prince or any other feted voice from years gone by. But if they were still with us, you can be absolutely certain that they’d be huge fans of her and her vision. There are many things to feel worried about regarding the future. But in terms of truly unique voices within music, we need to fear nothing. Héloïse Letissier is precisely the pop star we need for this particular moment in time. A stunning experience on so many levels. 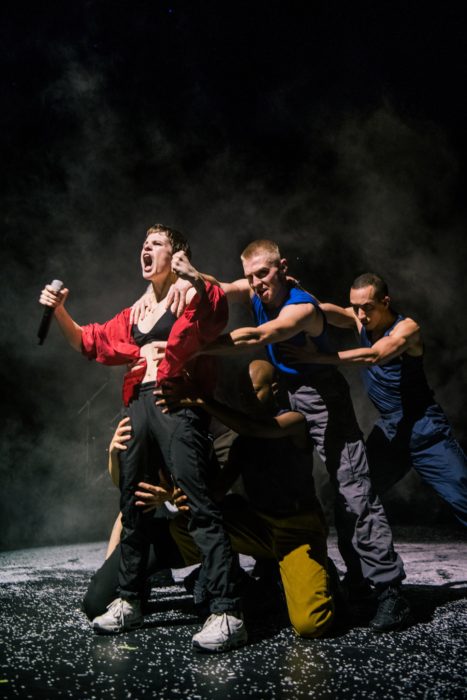 All words by David Edwards. More writing by David can be found at his author archive here.