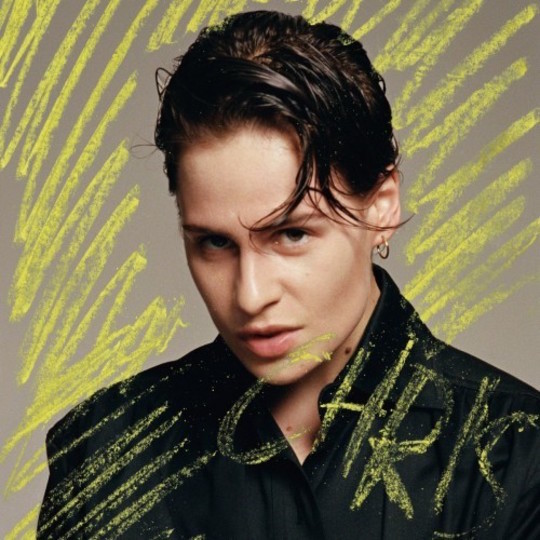 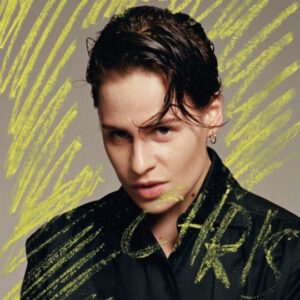 Christine and the Queens: Chris Because Music

The artist formerly known as Héloïse Letissier is a beguiling combination of sweetness and sophistication, ingénue and seductress, familiarity and otherness. She released debut album Chaleur Humaine in 2014, advancing on a transitional journey from teenager to self-assured global star, via Soho’s  renowned drag club Madame JoJo’s. In November 2016, Vanity Fair France named Christine the most influential French person in the world. Letissier now evolves from her Christine And The Queens persona to gender defiant, newly cropped Chris. She’s seemingly moved from having the world at her fingertips to holding it in the palm of her hand.

The self-produced double album, Chris expresses a strong sense of control comprising 23 songs recorded in French and English. Letissier has spoken of her intention to make a record that is ‘too much, too independent, too horny, in lust’. Thematically she’s unequivocally pushing the boundaries around female identity. Musically Chris delivers slick, pop, dance-infused music referencing Madonna and Janet and Michael Jackson. It celebrates the joy of popular and synthesised music at its most ebullient, inspired by the analogue end of the electronic spectrum. David Bowie’s successive stage characters must also have served as an influence. Chris grapples assertively, exploring female desire. There’s also a frustration at the ongoing battle of the sexes for equality of expression, as on visceral Damn (What Must A Woman Do) and mournfully tinged harmonic bondage pop, 5 Dollars. Both roam around the monetisation of sexuality. Her timbre is light-hearted and she is without doubt, a very visual performer whose performance routines add flamboyancy.

Directly propositional, Comme Si launches with 80s disco beats and oscillations; purposefully affirming ‘there is pride in my singing, the thickness of a new skin’. Letissier’s distinct off kilter intonations bring a percussive effect. Title track  featuring Dâm-Funk, in English: Girlfriend, offers an equivalence of sentiment and sonics to the more explicit opening on Gallic version Damn Dit Moi. A savvy double entendre (the dualism of language on the album is more transparent in some places than in others). Whilst showing clear inspirations from vintage pop icons, the song is stamped with contemporary ideas. Enhancing a New York feel, the video for Girlfriend references the iconic and deeply masculine Lunch Atop A Skyscraper photograph of 1930s steelworkers and scenes from West Side Story; reinforcing Letissier’s strong choreographic aesthetics. Poetic The Walker/La Marcheuse is a soul-searching exposé around violence, revealing raw emotion. Doesn’t Matter keeps snappy, percussive pace; a flexing tussle of ideas and battle of wills around the imbalance of sexual identity. Inspired by the painting Saturn Devouring His Son, Goya Soda, a Warholesque perfect encapsulation of Chris’s pop sound, echoes effervescence with infectious repeating hooks. Whatever metamorphosis her adult self undertakes, Héloïse the child inside, is revealed on reflective What’s Her Face/Machin Chose; an arrangement of electronica and piano set the stage for poignant playground flashbacks. Feel So Good and allusive Make Some Sense serve as platforms for the purity of her vocal, ‘Make some sense out of it all, Cause I won’t make it for you’. The Stranger concludes with spaced tempo and theatrical flourish.

Christine And The Queens