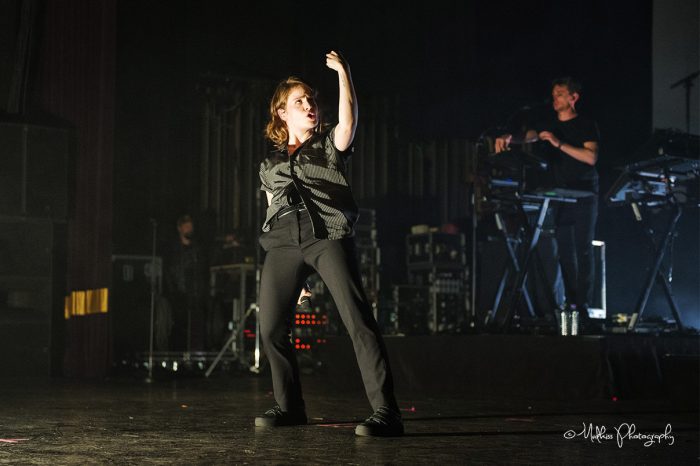 Controversial French born singer/songwriter Héloïse Letissier aka Christine and the Queens made her debut in Manchester, performing at the 02 Apollo. Louder Than War reviewer Vanessa Lourenco and photographer Melanie Smith couldn’t miss this breathe of fresh air on the musical scene and went to report back.

Héloïse, a college dropout turn music star, started her performing career in 2008 at only 20 years old. She got her stage name from her first fans when she used to perform to drag queens. She has been with the record label ‘Because Music’ since 2012 and loves to explore the beauty of androgyny, be it in her music videos, photoshoots and album covers, always defying the theme on gender. She’s the Tilda Swinton of the music industry. Christine and the Queens is an artist that explores the world of visual performance and randomness. You never quite know what you’re in for until it’s actually happening. She is also a Twitter celebrity, with her outspoken statements about freedom, art and gender. 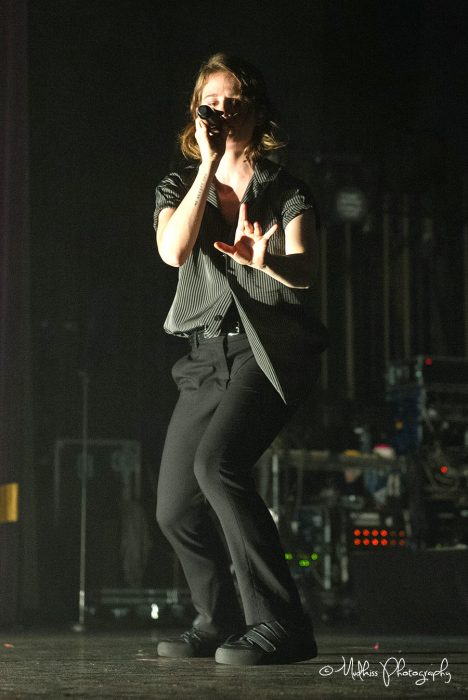 The energy in the venue was absolutely exhilarating! I had never seen so many people queuing to get into a venue like this and inside you could feel everyone vibrate with excitement. As soon as the lights went down there was a roar of cheering chants calling out from the crowd, as if they’d been here for 3 days waiting for that moment! The acoustic of the room helped to emphasize every single cry out from the fans.

Christine and the Queens jumped onto moving and lighting platforms along with two dancers as the show starts – there was a strong voice emerging from this petite woman, dressed as a boy and it’s a delicious dichotomy to watch. They moved around the stage dancing synchronized to the beat of the songs with precise movement and an actual light show going on, all at the same time.

After a couple of songs, Héloïse interacted with the fans, making a big deal about coming to Manchester for the first time and how she wants everyone inside to feel as if they are free, completely free and they can and should be whatever they want to be, that could be a train, an animal or a boy or girl, as long as it’s what they want to be, reinforcing her belief of gender neutral equality and the power of simply being. She introduced the next song by saying “cause tonight I’m a man /woman” and starts singing a cover from Tame Impala “Cause I’m a Man”, a song known for its lyrics and power. She played with words and languages switching from French to English in the same song and tried to input the importance of being yourself in her lyrics.

There is a lot of thought behind every detail of the show, a huge canvas at the back of the stage played videos whilst she performed. The images served simultaneously to contrast with what was happening onstage or to actually mimic it. A bit like an upside down world yet exactly the same – always playing on the yin and yang, light and dark but emphasizing how one always complements the other and one could not be without the other as they are the same, they are one. 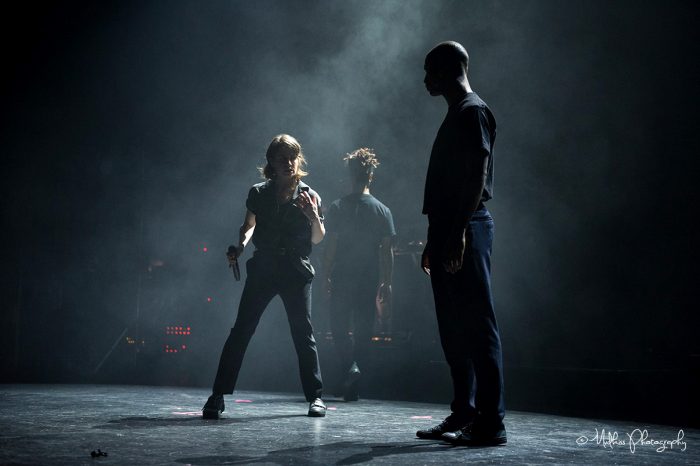 The whole act is about the interaction with the public, passing a message, empower individuality and embracing what you are, no matter what that is. It feels as though the people watching are not just here just because of her music, but also because of her presence, ideology of life and how she seems to be the flame holder for the whole concept of a person rather than a labelled being.

The show closed with a massive row of clapping, cheering, screaming and intense hands thrown in the air trying to grasp one more second of her god like presence and you can see in her beautiful face lined out by her intense yet delicate French features, a sense of accomplishment.

Christine and the Queen is touring around the world for the next few months so make sure you catch them if you can, this is a show you have never seen before and you want to be able to say “I’ve seen it, I’ve been there and it was absolutely amazing!”.