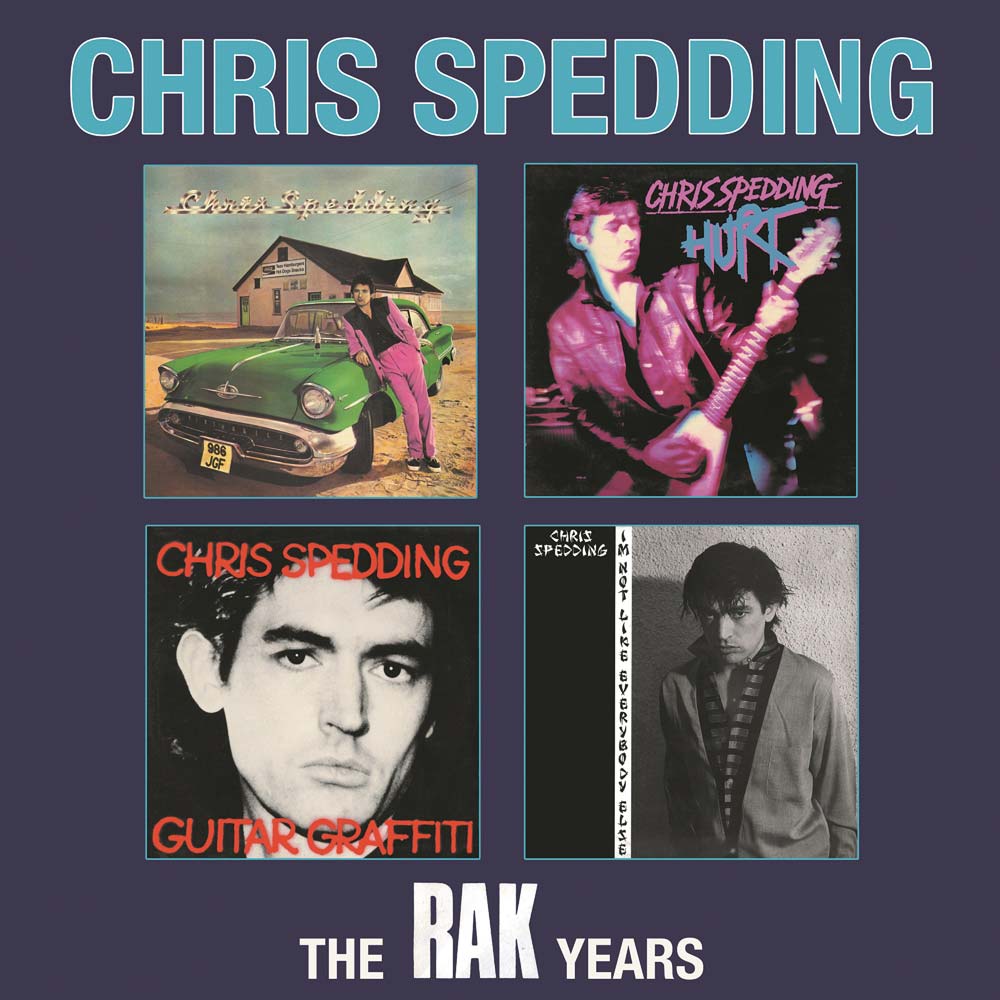 Boxset bringing together the legendary guitarist’s four albums for RAK from the years 1975 to 1980, plus bonus tracks……..Ian Canty looks back at the Womble who would nearly be a Pistol…….

Chris Spedding has spent the vast majority of his career in the shadows, either as a sessioner or sideman, but he was for a while a bit of a Pop star in his own right. In the late 60s he seemed to slot straight into the gap left by Zeppelin-bound Jimmy Page in the session scene, whilst keeping a separate career going with Pete Brown’s Battered Ornaments. Later he joined with Steve “Snips” Parsons in the band Sharks (recently revived with ex-Pistol Paul Cook manning the traps) who recorded two well received Hard Rock albums First Water and Jab It in Yore Eye during 1973/74.

He then found the perfect spot for him to display his skills backing such luminaries as John Cale and Brian Eno, but the hyperactive Spedding still yearned for an outlet for his own songs. Though he had released some Jazz inspired solo offerings and recorded Only Lick I Know for Harvest in 1972, since that time he had been fully occupied with band and session work.

He struck out on his own again a year after the split with Sharks and scored the freak hit Motorbikin’. Built on a 50s Rock & Roll template, this single was simultaneously the last gasp of Glam (both of which of course referenced early Rock and the Mickie Most on production duties helped as well) and a look forward to the tight and tough 3 minute New Wave singles of a few years later. It still sounds great – full of bad attitude and stood out a mile in meek and mild 1975. Spedding never had a follow up hit, but persevered through the four albums presented here and numerous accompanying singles.

A year after his hit he was the first producer to record the Sex Pistols and played with the Vibrators at the 100 Club Punk Special in 1976. He also hooked up with Knox and co to record the Pogo Dancing single. Though this earned him a level of respect with some of the Punks that eluded many a musician of his age, it did not result in much commercial success. Since the time documented in this new collection he has retreated more into a myriad of collaborations and a low-key solo career, always on hand with his Gibson V and a hot guitar lick.

To be honest he never quite appeared to be a natural frontman, in reality finding himself caught between being the mega-talented guitarist that he undoubtedly was/is and the very different role out front. Perhaps he did not have quite a unique enough voice to pull it off as a major solo star? Maybe the timing was all wrong despite the fact he was ahead of the pack with regard to the Pistols?

Having said that, the self-titled first album in this collection (actually his 4th solo record in all) is somewhat of a kitsch delight, if lacking anything quite as memorable as “the hit”. On the front cover Chris looks as cool as any rock musician had a right to in 1975 (also given that he had been clad as a Womble in the same year!) – posing in what looks very much to me like a “Let It Rock” sharp two colour suit and set against an idealised US 50s Rock backdrop, Spedding looks the business. The sleeve reflected the contents to a T, as the original impulse of Rock was fed through the 70s technology. Veteran Shadows drummer Brian Bennett pitched in and he must have found a fair amount he was familiar with, though it is enjoyable enough fare, with plenty of new quirks.

Never Girl In the Neighbourhood comes a close second to Motorbikin’, reworking and updating Bo Diddley/Buddy Holly’s style to good effect. Pointing towards the New Wave that was still a way off, Bedsit Girl appears to be the Members’ Solitary Confinement two years early, with its similar subject matter of being stuck in the big city where everything is meant to happen but seldom does. Spedding was never a fan of soloing, in fact he appears to be vehemently against the idea. But he does a real Mike Yarwood job on Guitar Jamboree, spoofing Clapton, George Harrison and Keith Richards among others. Nervous is quirky with a near out of tune guitar and Boogie City is a nice energetic piece of pure edgy Rock & Roll to end with. All in all it was an entertaining enough effort.

By the time that he had followed up this record with Hurt a year late, the UK Punk scene that he had helped to nurture had exploded. As stated above, teaming up with the Vibrators for the Pogo Dancing single (both sides presented as bonus tracks) gave Spedding a foothold in the Punk world, but by the time of his next album more authentic Punk recordings had appeared. Rather than attempt to chase the bandwagon with another cash-in Punk record, to his credit Spedding chose his own path and in doing so recorded the best album of his career.

Hurt featured Chrissie Hynde on backing vocals (she had recently left the Johnny Moped band and was still a year away from putting together the first Pretenders line-up) and was produced by Chris Thomas, who Spedding had introduced to the Pistols. This album was an all-round strong effort with few weak points. Kicking off with a hot version of Garland Jeffries Wild In the Streets, this album sees Chris at his best, sharing a little with the Pub Rock/New Wave wonders of Nicholas Lowe. Lone Rider with its biker imagery seems the logical sequel to Motorbikin’ and you can really hear Chrissie in the background! Aint Superstitious is a atmospheric bit of New Wave with some neat guitar pyrotechnics to boot, with the near title track Hurt By Love being a real peach, a crunching garage style treat.

Much more problematic was 1979’s Guitar Graffiti. After a decent start where Spedding taps into the original sound of Ultravox! on the Sci-Fi paranoia of Time Warp and Walking’s stylish nod to Lou Reed things go downhill further on into side two. Breakout in its studio version seems to be aping the Police’s limpid Reggae for no great benefit, but the “live” version included later is more urgent and an improvement. Worse still, Frontal Lobotomy and More Lobotomy are just pretty pointless guitar twiddling (to be fair in the sleeve-notes it seems these have been included because of criticism of Chris not indulging in drawn out solos, but it doesn’t make for great listening).

Hey Miss Betty is billed as live but it does sound like audience noise has been merely dubbed onto the earlier studio recording (which is included on disc two as a bonus) and the whole feel is that of a project ran out of steam halfway through. Maybe Chris producing the album was a mistake – an outside producer might have demanded a bit more out of him, something he was certainly capable of on the evidence of the two previous records.

The final offering here I’m Not Like Everybody Else was an improvement on Guitar Graffiti, but was not enough to put Spedding back in the charts or indeed the public eye. He had decamped to the US at this point and spent part of the year before this record’s release supporting his old mucker Chrissie Hynde’s Pretenders on their US tour. Though well played and produced this LP must have felt a bit antiquated as we headed towards 1981, with a reliance on two 60s covers (the Kinks title track and a version of Dave Berry’s hit The Crying Game, which emerged a a single) and its core values of 50s Rock and R&B.

Lyrically there evidentially seems some bitterness at work: the mainstream music media had not been especially kind to Chris’ efforts (see the scathing Musical Press here). Depravite may not actually be a proper word but it is among the best tracks on this one, with fast choppy guitar lines complimenting a carefully played bass part. I’ve Got A Feeling harks back to his days in Sharks and old standard A Shot Of Rhythm And Blues goes right back to Spedding’s R&B roots, but overall the LP is a little underwhelming.

This album signalled the end of Chris’s high profile solo career, though he has since recorded extensively and involved himself in many music projects over the years. He even found himself a semi-permanent role in the 21st century version of Roxy Music as a live entity and also took part in Jeff Wayne’s War Of The Worlds show. He certainly likes to keep busy!

The RAK Years gives us the full story on Spedding’s late 70s activities and features two good albums in Chris Spedding and Hurt. If the others two LPs were lacking, they did both have a couple of tracks at least of some interest. Housed in a handsome clamshell and with some informative sleeve-notes from 70s expert Phil Hendricks from the Stiffs, this collection traces the key years of an exceptional guitarist turned song-smith. If on occasion it does plumb the depths a little, Hurt in particular but also the self-titled 1976 LP are well worth hearing and very enjoyable efforts indeed.