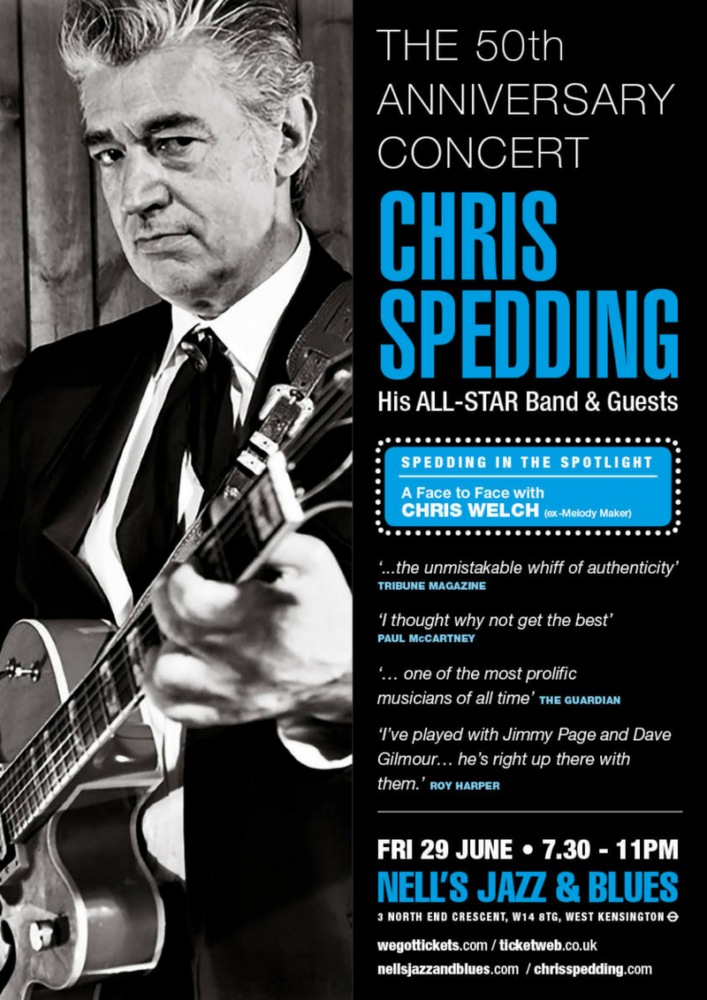 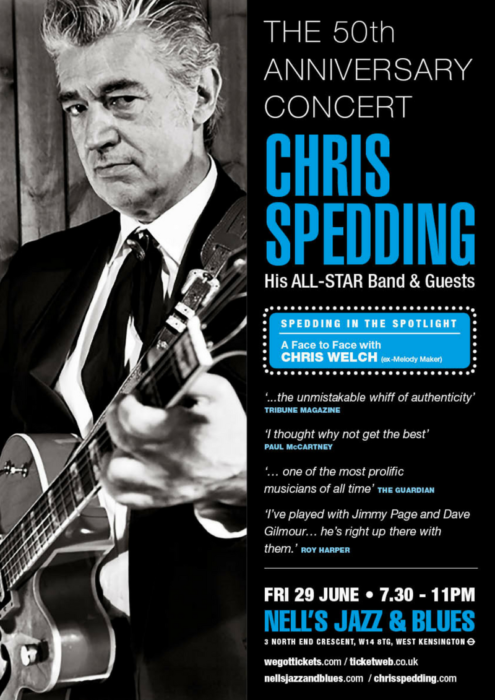 Louder Than War’s Craig Chaligne reports on the 50th anniversary gig of one of the world’s most celebrated guitar players.

Put together by legendary gig promoter Stuart Lyon (who’s also celebrating his 50th anniversary in the music business this year), this evening was a fine celebration of Chris’s career.  After a nice opening set by singer Molly Armstrong, we were treated to an excellent Q and A led by Chris Welch which enabled the other Chris to share some anecdotes on his musical upbringing (being fired from the school orchestra for detuning his violin on purpose) and his first years as a professional musician (playing bass for Dusty Springfield among many other gigs). The interview could have lasted another three hours and there wouldn’t have been time to cover all the landmarks on Spedding’s musical CV.

Assembled specially for this occasion, the cracking backing band was tight as hell with Henry Spinetti’s drumming driving the songs forward. “Wild In The Street” from 1977’s “Hurt” proved the perfect opener and was promptly followed by Chris’ own take on “Shakin’ All Over” that he recorded on his 1986 LP “Enemy Within'”. Another track from “Hurt”, “Silver Bullet” featured the first of many great guitar solos of the evening and saw Chris showcase his distinctive melodic technique. The evening’s setlist was very diverse jumping from a Freddy King instrumental to a cover of Jack Bruce’s “Theme From an Imaginary Western” (sung by the keyboard player). The circling riff of “Mary Lou” remains one of Spedding’s best covers and the reflective “Portobello” one of his best originals. Chris reached back to his early days as a solo artist with “She’s My Friend” from his 1970 solo LP “Backwood Progression” and  bluesy “Rip It Up” was a testament to the man’s love of early Rock’n’Roll.  “Music Breakout”, a track written by Chris’s partner in Sharks, Steve Parsons and which has gone through many versions over the years (even a slightly reggea-fied one on Chris’s 1979 LP “Guitar Graffiti”) was here played in a similar tone to the one featured on Sharks’ “Killers of the Deep”, with another absolutely spellbinding solo.

Introduced in a very-Spedding low key way (“we’ve now reached the time in the set where we play that song”), “Motorbikin'” remains an excellent track and the guitar showcase of “Guitar Jamboree” remains as entertaining as ever. Just before the last song, another legendary session player, Guy Pratt jumped on the stage and urged the crowd to cheer Chris for his fiftieth.  As Sharks did last year at The Lexington, the encore was short and sweet with a rocking “Summertime Blues”.