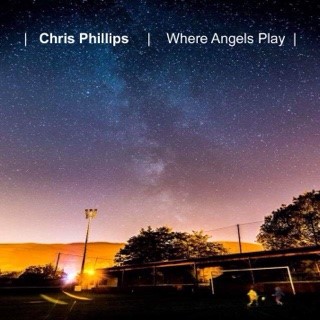 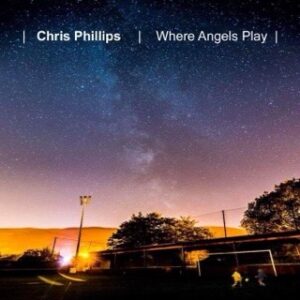 Where Angels Play is the third album by Alan McGee endorsed, South Wales musician Chris Phillips. It follows his debut album, Keep Movin’ On (2012) and Come On And Set The World Alight (2015). In the interim between, Phillips has shared stage with Manic Street Preachers and featured on BBC Wales and ITV Wales news – in promotion of his 2016 European Championship anthem for Wales, Let The Good Times Roll. His new long player continues his progression as a singer/songwriter – and lets in the light.

Recorded at Duke Street Studios (Aberdare, South Wales) and produced by Meirion Townsend, Where Angels Play is an album inspired by family: “My kids, my wife, loved ones… they inspire me,” Phillips says. “Everything I do musically is for my kids. The album title is from a song on the record and I thought it was an apt dedication to my boys,” who also feature on the cover sleeve.

Speaking of the title track, Where Angels Play, it paints a picture of children playing under a starlit sky – a moment they can be anything. An acoustic led ballad, it is hypnotic and spacey. His voice is emotional – there’s a longing in the delivery.

Imagery of night is prominent in the lyrics throughout the ten songs here. But it is far from a dark, gloomy record. It is heart warmingly positive. “Hold on/Blow those dark clouds away,” and “Let love shine its love on you,” both from, the big, singalong, string laden, Moving On. That juxtaposition is also effectively used on No Friend Of Mine. A fuzz treated, minor key, guitar figure is brightened by, “Don’t stop ‘cause you’ve come so far.” It is anthemic and, when the chorus hits, swaggering. The campfire ballad, Running To You, cements the nocturnal vision: “Lights fall down from the sky/To take you up to the night.”

Elsewhere we have the, Lennon-esque, double-tracked vocal, waltz, What I’ve Done. Holding Onto The World is all horns and has a Neil Young, channeling, guitar solo – and Tear Us Apart which, again, features great use of horns and great hooks. All given Meirion Townsend’s Valley Of Sound treatment.

Alan McGee is an admirer of Chris’s songwriting and the penultimate song on the album has shades of one of McGee’s star signings, Oasis. Shake The Chains is huge and nods to Oasis’ The Masterplan  in parts. The song soars. Justin Beynon’s (Cripplecreek, The Broken Vinyl Club, 4 Brothers) lead guitar further elevates it. Dreams In The Sun closes the album and cements the positivity throughout, “We can chase our dreams all day in the sun.”

Chris says: “I listened to the demos for about two years, trying to imagine the songs and how they should sound. It’s helped in creating a great record.” It has. Where Angels Play is a fine, modern rock record with heartfelt songwriting, a lot of passion and soul has gone into it. It flows wonderfully too, songs rarely reaching over four minutes;  the most dominant sound throughout being Chris’s voice and strummed acoustic  and so it should be.

“I hope people listen to the album because it deserves that. This is a record that would have sold millions had it been released by Ed Sheeran… in fact it would have broke the fucking charts,” Chris adds.

Watch the video for Running To You here: