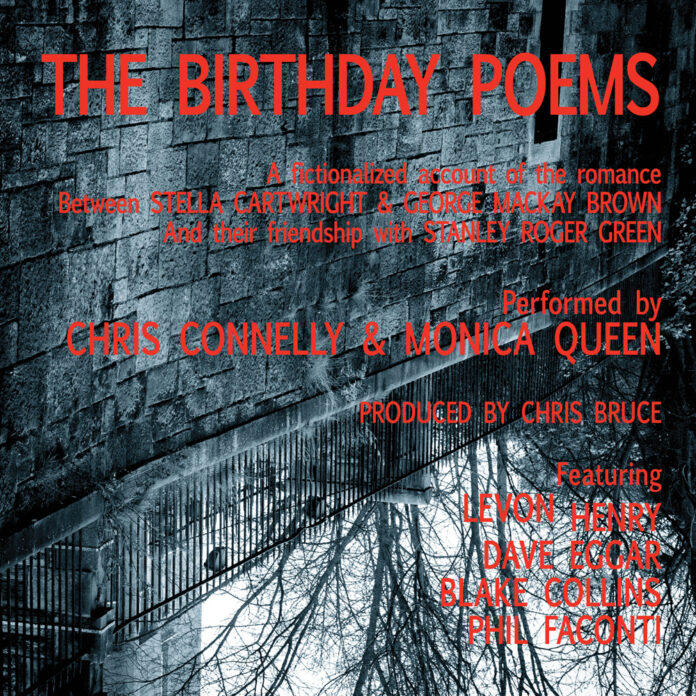 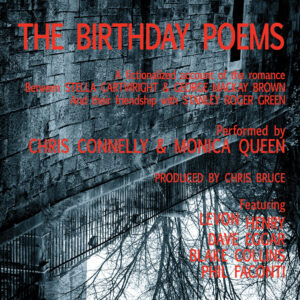 What do you get when you take two Scottish musicians, one, a legend of the industrial scene and the other, a chanteuse who is literally the Queen of the independent Scottish music scene, then add a tale relating the stories of three complex characters who are part of the recent history of the Scottish arts scene? The answer is the stunning alternative folk masterpiece that is The Birthday Poems. 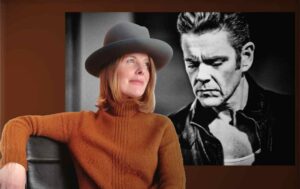 This is more than just a musical collaboration between the founder of Finitribe and member of the likes of Ministry, The Revolting Cocks & Pigface, and the lush vocal cords of Thrum and Tenement & Temple front woman who has already appeared on one of this years top albums in Gracious Losers Six Road Ends. This is a labour of love. It is passionate telling of the little known and ultimately tragic backstory from recent history, of Orcadian poet George Mackay Brown, his love and muse, Stella Cartwright and their friend, Stanley Roger Green.

The songs on the album track the relationship between the three and the rest of the Scottish poets “club” who congregated in the Abbotsford Bar in Rose Street, Edinburgh. Connelly and Queen lend their voices to the key protagonists, recounting the highs and lows of the friendship and the lives of the individuals involved.

The overall atmosphere, and that for each of the 19 perfectly formed vignettes, created by all involved in making this beautiful art work (it doesn’t seem right just to call it an album) absolutely sets the scene for each part of the story. From the upbeat and intoxicating, to the sparse and sombre. 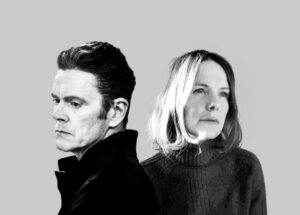 Not only is this a phenomenal musical piece, it has drawn me in to a piece of Scottish history which I was blissfully unaware of. I knew of the poetry of Mackay Brown, but other than that, the story behind the talented poet and author from Orkney was new to me, including that of his muse, the ultimately tragic figure of Stella.

My Father Took Me Everywhere

The album opens with Stella (Monica Queen) recounting how she came to meet the poets, My Father Took Me Everywhere. From a young age, she frequented all the places her father went, including the pubs and bars of Rose Street. Did this close relationship, with exposure to the drinking dens of Rose Street at such an early age, influence her lifestyle, leading to her untimely death after a lifetime’s relationship with the demon drink? It is easy to understand from listening to this song just why Monica Queen is so sought after across the music scene. Her honeyed vocals lend a sympathetic and utterly alluring voice to Stella.

Before we “meet” George MacKay Brown we have the introduction of Stanley Roger Green (Chris Connelly) in the form of Stella, Stan and Dostoevsky. I’ll sneakily add Bowie to that list. I know it’s been said on many occasions before, but particularly on this song Connelly seems to be channeling his internal Thin White Duke in his tone and delivery. Musically the song has a Bowie feel too with a harsh dissonant sax filtered throughout.

The song named after the party that started it all, A Minor Hoolie (a phrase coined by Cartwright), lives up to its name. Acoustic guitars and handclaps form the basis for this upbeat song based on the fateful gathering where the three first met. Green standing in awe of the gathered talent including George Mackay Brown.

Perhaps the most affecting songs on the album are the spoken word performances. The first of those are Cigarettes at Dawn (Stella) and the minimalistic arrangement of What Strangeness of Light and Dark (Chris). The former comes across like a lost tape of the real Stella, complete with intentional atmospheric hiss. The latter an ode to regret and sorrow in leaving his home to come to Edinburgh and the pain and misery it was causing. The scratchy strings morphing into a delicately played melancholic outro.

A Maze Among the Tenements takes the same sentiment as Strangeness but this time George is given an emotional strength by Chris. He is verging on anger in the strident vocal and pounding of the song, seemingly aggrieved and obstinate as a result of his depression and ill health.

Then the celebration. The first single from the album is a real Scottish pub party anthem. The song sees a reticent George at the outset willing himself into the club, but to shy to introduce himself. By the end, he is well and truly in with the furniture, the song building to a triumphant drinking song, intoxicating in its heady feeling of celebration. Let’s all raise a glass Tae the Poets

There is a slightly downbeat feel to the start of the relationship between Stella and George displayed by The Lowland Fulcrum. Perhaps a signal as to the ill-fated nature of the affair. Despite this underlying feeling of unease, this is a bewitchingly soulful duet between the two, taking turns in relating verses, and at the start of each highlighting the age difference by repeating the year of each of their births.

Despite this feeling of unease, happy times were had. One of these is recounted by George in The Rain Soaked Idyll, the story of a high spirited day in Leith unspoiled and undaunted by the weather. These happy times lead ultimately to The Phantom Marriage, a proposal from George with a dramatic musical arrangement as a backdrop. The music is tinged with sadness as the vocal duties are passed from Chris to Monica and the proposal ends up with no wedding or happy ever after.

There is both a beauty and poignancy in O Blessed St Magnus. This is a spoken word performance with George talking of his move back to his beloved home, away from his love. Magnus was the eventual subject of one of his book.

Saxophone introduces The Poet Herself. Monica’s angelic voice shining atop an assimilation of a late night smoky barroom jazz melody. The lyrics indicate a Stella spending her life in bars, seemingly involving herself in a string of meaningless relationships.

Chris manages to create an accurate reflection of Mackay Browns depression in the lyrics of A Desolate Spell, “when I write I feel fine, when I write I don’t feel fine, and the dark never leaves me alone”. This part of the album continues a mourning of a life unfulfilled from both George and Stella. Both drinking too much “when the bottle is empty I pray I don’t want more” and missing each other. George heard to be warning Stella off the Rose Street drinkers. Melancholic stark piano is the backdrop with sweeping strings adding texture.

Again an affecting spoken word performance brings a lump to the throat and a tear to the eye. Let Us Be Hushed is Stella talking to George (recounting the written word from letters sent) about memories of happier times. Following on from this, While My Heart is a Plough on this Wilderness Field sounds almost angry as George laments his life despite success.

A mournful backing vocal, a deep bass drumbeat and bells give a sinister edge to Smiler Wi’ a Knife, a description used by MacKay Brown to describe the effects of whisky, turning happiness to sorrow and apparently leading to arguments and the breakdown of the relationship between Stella and George.

The closing duo of songs are filled with sadness. Stan returns on The Birthday Poems and sings of Stella’s steep decline and death caused by alcoholism. Alone and without the group of poets around her. This song is torch-like and has qualities of The Walker Brothers about it.

The last word is left to the tragic figure of Stella. The close relationship with her father recounted in the albums opening song completely broken down after the death of her mother in From a Dreamer’s Shore. Despite the tragedy and sorrow (the lyrics would bring a tear to a glass eye), once again Monica treats the message within the lyrics so sympathetically and with such empathy, you can’t help but be in awe of her vocal. Of course her voice is instantly recognisable to anyone who has grown up listening to the music of the Scottish indie scene, but she has certain Kate Bush like quality here. A suitably compassionate ending to what is an epic achievement from all involved.

if anyone listens to this album and fails to be touched by the music, and the story of Stella, Stan and George, they have no heart or soul. A truly inspiring and wonderful listen.

I had the opportunity recently to ask both Chris and Monica a few questions. Look out for these interviews in the next week or so.