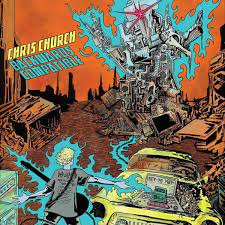 Big Stir reissues of Chris Church’s two recent albums for the Spyderpop label, Limitations Of Source Tape and Backwards Compatible, from 2017 and 2020 respectively. Ian Canty goes back to the future.

As Chris Church’s fine Game Dirt album (reviewed here) was the first time I had encountered the North Carolina native over the long-playing format, I was pleased to be able to catch up here with two items culled from his prolific career’s back catalogue. Both of these LPs, originally issued on Spyderpop, are now available again, having been newly repressed by the Big Stir label.

It makes sense to look at these records in release order, so I think I will peruse 2017’s Limitations Of Source Tape first. The album kicks off with a crunchy Fall Into Me, where a pure pop/rock thump meets a brooding middle section, something which adds a feeling of depth. Coming in hard at its heels, Pollyanna’s Going Dark simmers along with some choice six-string work and effectively-deployed handclaps, which are cast upon a tight folk rock framework. Then the marching percussion of Something Completely gives structure to an irresistible pop tune and that is enhanced by a prime guitar break.

Taken at a slightly slower tempo, Intransitive Proverb’s “golden wonder” has a magical, feelgood pull and if the strangely named Ostinate ups the pace and has a feel that borders on hard rock, there’s still plenty of room for a reflective lyrical standpoint. An acoustic guitar institutes the busy drive of the following track, Bell The Cat and the hazy tone of the long fade-out note here is slightly reminiscent of Hüsker Dü. But otherwise, Church manages to breathe fresh life into a host of sounds to offer something catchy and accessible.

Understudy Blues is a real fireball of chugging energy and contrasts with the lighter pop feel of Take A Knee very nicely. Psychedelia and hard rock both inform I Can Feel The Echo, with the separate strands feeding into each other to build towards the sweeping climax. Having nothing to do with The Toy Dolls song with a similar name, Worse Things Happen At Sea blasts off with a tough rocking template and riffs out a flow of words beginning with “new curtains from the same old streets.” A twisting fuzz sits behind a busy acoustic and again the musical craftmanship is out of the top drawer.

Taking things down a touch comes Consciousness Fade, but it still comes with a meaty chorus, metallic guitar solo and some finely-judged backing vocals. Church never shuns mixing up the genres and that is part of what makes his work so appetising. Perfecto’s distorting guitar is overlaid with a beat pop ebullience and Be My Nuisance breezes out of the blocks possessing a jangly joie de vivre. Finally, Better The Devil You Know (not the Kylie number) is a delightful, summery love song given the twist of some great growling guitar.

In summary, to me Limitations Of Source Tape is a fine guitar pop/rock album with tunes to burn, coming with a lyrical viewpoint that is down to earth, intriguing and passionate. This is a set of well-written songs given some thoughtful, but often pleasingly tough, musical settings. All are well worth hearing again on this reissue.

The second of the Spyderpop albums, Backwards Compatible, only came out on Spyderpop last year, so this is a bit of a quickfire repress really. Someday’s Coming Fast fizzes and provides a catchy and classy power-popping beginning to the LP, with Dumb It Up continuing in a similar vein. The drums act to anchor the sound excellently on this one, which gives the guitar playing a platform to really take off. Begin Again is another tough rocker, which combines with the first two to give Backwards Compatible a flying start. Church has a voice with enough grit to convince on the rough-rocking sections, but also it slots right into place with the cool harmonies utilised too.

No Letting Go’s jamming chords reflect well the turmoil of the lyric and the pure, straight down the line rock ‘n’ roll attack of What R U is really satisfying. The song’s story, if I’ve read it correctly, concerns someone who is so busy “telling it like it is,” they’ve ended up losing any sympathy people may have had with them, i.e. “laying down the law, it’s the final straw.”

Next comes You Are The Thunder, where a bombastic rock structure works towards the divine, soaring chorus. It would be a mismatch in other people’s hands, but Church gets it just right. We go past the midway point on the LP with the chugging rhythm of These Days, which has guitars chiming nicely on a gleaming bridging section. Too Deep is a classy mid-paced number that excels at rock ‘n’ roll basics and Left In The Summer pounds in, juxtaposing those key harmonies with some down and dirty guitar. The song seems to be a realisation that if you put all your hopes on someone, they always have the potential to let you down and that’s a long way to fall. There’s a great deal of out-and-out nous to the songs on Backwards Compatible, adding to the craft of the tunes and the sheer solid thwack of the music.

A sparky, stomping beat underpins the addictive and memorable Coulda Fooled Me and then comes Kiss It Goodnight, where no-nonsense guitar hammer flows out into a beautifully-realised, feelgood climax, which carries on right to the synthesizer ending. Then we come to the final offering on the album, Pop Dreams. A radio tuning gives way to what is a real blast of a vital pop number, an instant classic in fact. This tune gives the LP a fittingly explosive send-off and left this listener, at least, wanting more.

Backwards Compatible isn’t stylistically that different from Limitations Of Source Tape. It is perhaps more consistently up-tempo and, for want of a better description, cast in a heads-down hard-rockin’ pop music mode. But as it is another top notch pop/rock record full of good tunes, that doesn’t really matter much. Big Stir can be commended for giving both these Spyderpop LPs another turn in the spotlight. On each of these records, Chris Church follows his pop vision with a blazing fire and it is a joy to hear.

Chris Church is on Facebook here and his Bandcamp site is here.