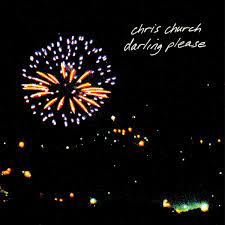 Newly remastered reissue of Chris Church’s Darling Please album, originally recorded back in 2011 and dedicated to his late brother Mike. Chris played all the instruments himself with Lindsay Murray on backing vocals and Nick Bertling overseeing the mix. Ian Canty minds his manners…

The Chris Church album Darling Please was only originally given a limited 50-copy release back in 2011 and as another oddity it did not bear a credit for the artist. This was the one-man hive of activity’s first solo record album where he played everything, but unfortunately he was far from happy with the sound finally achieved. The upshot was that the brief availability of this recording was not followed up at the time with a larger pressing. Church toyed with the idea of reusing the songs on other projects or simply re-recording the entire thing. He eventually decided to see whether there was any way that the original recordings could be manipulated into something close to his vision for the LP.

At first, efforts proved problematic, with the two-track stereo mix of the LP the only available source for the necessary upgrade in sonics. But the magic studio skills of Nick Bertling were brought into play last year and Lindsay Murray came aboard to add just the right touch on backing vocals. Following on from last year’s Game Dirt LP (reviewed here), Darling Please was finally passed fit for the world to hear it properly.

It’s a good thing Chris had faith in the record, as what is present is well worth making time to hear in its newly realised clarity. What is revealed is a personable set of intelligent, bittersweet songs allied to a full-throttle, rocking and loud sonic attack, very rock-oriented but with great tunes too. There is a dusty, fuzzy electric buzz for the most part of the record that could have the effect of making one feel akin to being in the thrall of a hazy dream, that is if the songs did not seem to deal in hard-bitten reality laced with acid humour.

A bell tolls and then History fades in to introduces us to the world of Darling Please. The rhythm moves slowly at first, until blasts of guitar fly in, with the enigmatic words helping to paint a picture of a real but fragmentary world, far away from the easily wrapped up stories of fiction. The thudding beat of We’re Going Downtown propels a song that hints at the loneliness of the crowd and sadly declares: “We’re at the end of our joke and the rope’s on me”.

Pillar To Post (not the Aztec Camera song) touches on the natural urge to flee rather than make a difficult decision. The music positively gleams with the golden tones, overflowing with fuzzed-up guitar energy. Seeming to invert the traditional sappy love song, Never So Far Away looks at both sides of the matter through eyes made cynical and does so musically with a great hook and arrangement. This brings home the fact that the words on this album are blessed with the type of wisdom that comes at a heavy emotional cost. The sound achieved here is spot-on too and speaks volumes for Nick Bertling’s work and, although Chris looks down on his drumming abilities in the sleeve note, they certainly do the right job. This is also the first point where it becomes clear that Lindsay’s vocals gel so elegantly with Church’s across the album and indeed the years.

The heads-down purpose of Atlantic provides the backing to what is a classy near duet and the words “and you were never mine to keep” acutely pinpoint the transient nature of human relationships. There is some great guitar work here that really crunches, which adds to what is a smartly delivered and touching slice of pop/rock. Bad Summer continues the melancholic thrust of the lyrics, but it is juxtaposed with a bright, irrepressible beat. In other hands one could read this as an exercise in self-pity, but Church is such an able hand that his words come out as heartfelt, realistic and not without hope. It’s more about enjoying the ups and recognising the downs, which after all is a part of life for almost everyone

The great work between Chris and Lindsay’s voices continues through the album, with a more laidback I Wish I Could Say I Was Sorry hitting the right spot. There’s a side serving of sharp humour all the way along Darling Please, with the opening couplet – “Space, the final frontier, we’ve got shit-tons between our ears” – putting the protagonists’ fallibility right in context. Then Nepenthean slows right down to a trudging march with a heavily distorted guitar jangle, contrasted by the heavenly singing.

We Could Pretend picks up the pace, a story of people tied together through time and circumstance, trying gamely to make the best of a bad lot. Musically it comes over as somewhat like a desert standoff between early R.E.M. and late-period Husker Dü, which isn’t a bad place to be at all if you have an oasis (not the band) handy. Final offering Triple Crown tops things off with a hypnotically entrancing élan. We glide along to the feedback-enhanced conclusion with a real sense of pure beauty, plus the mystery and possibilities of the eternal present.

I’m glad Chris chose to revisit Darling Please as it would be a real shame if these bitter, funny and evocative songs went unheard. That they are caught in so lucidly is a testament to Nick Bertling and also Church’s and Lindsay Murray’s combined talents. What all this amounts to is a fine record of admirable depth, insight, power and melody.