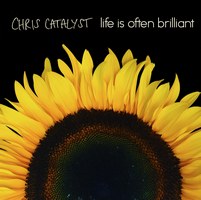 Chris Catalyst seems to be everywhere at once – currently touring as one of the powerhouse guitar players in the Sisters Of Mercy (European tour with Membranes supporting in September) he is also the main man in the much loved Eureka Machines and has somehow managed to find time to record his debut solo album an accomplished affair that embraces the superior songwriting on his top ten favourite albums that are listed below but with his own urgent twist.

CHRIS CATALYST – MY TOP 10 ALBUMS (AKA NOT NECESSARILY MY BEST ALBUMS OF ALL TIME, BUT TEN THAT I COME BACK TO A LOT) (this is part one of the list – part 2 is here)

This is the first album I really remember buying for myself, from a car boot sale in East Yorkshire one frosty Sunday morning. I would spend hours leafing through every record in people’s dusty cardboard crisp boxes, hunting through discarded records as people ditched their old-hat vinyl in favour of the shiny new CD format. Thousands of pounds worth of collectables were sold off for 20p or 50p, with no idea that twenty years hence, music lovers everywhere would be back in the thrawl of vinyl, with its captivating sleeve art and loveable tangibility.

I’d grown up listening to David Bowie through the walls of my older sister’s bedroom, and to hear it leap out of my Panasonic midi system (still going strong, incidentally) for the first time is still something I can remember like it was yesterday. The haunting Woody Woodmansey drum intro to opening track Five Years so eerie and wonderfully evocative, the title track so anthemic and powerful, the swing and swagger of Starman and Suffragette City still sounding vital and life-affirming even forty five years after it’s debut.

My favourite moments were (and are still probably are) the ballads – Lady Stardust and Rock n’Roll Suicide. Bowie singing – and performing – at his best. Also, to this East Yorkshire lad (I hadn’t traitorously decamped West to Leeds yet), discovering that the band were from just down the road in Hull and Driffield was a tremendously empowering moment which suggested one day I might be able to play that guitar and wear those ridiculous clothes. Despite at that point not even really knowing what a guitar was.

I miss David Bowie every day, but remember him from the massive original artwork for the ‘Heroes’ 1978 tour, that Andrew Eldritch from the Sisters gave me, which I have framed in my front room.
Sgt. Pepper’s Lonely Heart’s Club Band – The Beatles

You know this one. What is there to add, really? It’s impossible to overstate the importance of The Beatles on the world. It’s more difficult for me as I didn’t grow up through it, and it’s a massive cliché, but when you look back over what they achieved in such a short space of time, it’s really quite monumental. As you already know.
I grew up with their music as the backdrop to my life, utterly taking for granted the dynamism, the musicianship, the inventiveness and overall the incredible songwriting that The Beatles gave us all. It was only really when The Beatles Anthology came out that I realised that this was four blokes from Liverpool, taking on the world, and winning. Before that, they were pictures in a magazine; cartoon characters, superheroes with superpowers that weren’t attainable to mere mortals.

You know the highlights, but mine include the underrated Fixing A Hole – where McCartney’s voice sounds amazing; She’s Leaving Home – with one of the greatest pop string arrangements of all time; and of course the monumental A Day In The Life – which, if you try to listen in context, is one of the most inventive pop songs of all time. It’s easy to see it as a bit hackneyed now, and not everything that it influenced was great, but I firmly believe that this (along with Pet Sounds by the Beach Boys) was the beginning of the next level of pop songwriting and musicianship. Maybe even prog. Sorry. Speaking of prog…

The Stranglers – The Gospel According To The Meninblack

Having luckily grown up on classic pop and rock through my family’s penchant for generally decent music, it was time for me to branch out and discover something for myself. That something was punk, albeit over a decade too late. Aged 10, I somehow came across The Stranglers. Even at that young age I realised there was something brilliantly uncool about them – the singer was a teacher and the drummer was about a hundred – but this instilled in me a total disdain for ‘cool’ which remains with me to this day.

I got into the Stranglers through the usual channels – the classic snarl of Rattus Norvegicus, the new wave spike of Black And White – but it was the 1981 concept album known generally as ‘Meninblack’ that particularly captivated me. A concept album about alien visitations to Earth, aided by liberal quantities of inter-band quarrelling and very hard drug abuse… allegedly.

Gone are the spiky three-minute punk anthems and the sardonic snarling vocals, in favour of grinding instrumentals (Turn The Centuries, Turn), hilarious blasphemy (Second Coming) and seven-plus minute experiments veering into prog (Hallow To Our Men). This album is not generally earmarked as a Stranglers classic, but it’s former singer Hugh Cornwell’s favourite, and many cite it responsible for techno. It’s well worth digging out. It’s so weird.

One of the things I love about the Stranglers is that at any given time, all four of them were essentially playing the lead instrument, but it never sounds wanky or wilful. It’s for the power of the song, and when they were in tune with each other, there was no-one better. And, four hundred years later, they’re still brilliant, both live and in the studio, pumping out new classics like Freedom Is Insane and A Soldier’s Diary – well worth looking up.

TMBG’s breakthrough album ‘Flood’ may seem a comedy choice but when I was about 11 this album blossomed into my life and I still listen to it a lot now. The biggest effect this album had on me was that it made me realise that music could be funny, and irreverent, and weird, and not necessarily full of cliché – you could write a song from the viewpoint of a night light (Birdhouse In Your Soul), a song about quantum physics (Particle Man) or a song about the joys of whistling in the dark (err… Whistling In The Dark).

Part amazingly clever (the aforementioned Birdhouse In Your Soul has 18 key changes), part dazzlingly straightforward (Minimum Wage’s lyrics: ‘Minimum wage’), Flood is a wonderful insight into the twisted yet utterly pop mindsets of this bizarre duo.

There weren’t a lot of punks in East Yorkshire in the early 90s, so it was inevitable that I was going to dip my toe into Kerrang-infested waters, eventually. The problem was that, try as I might, I couldn’t find anything to love about any of these posing Americans singing about how great they were. They just came from a different world to me, a world that didn’t even particularly interest me. Even the big guns like Metallica just seemed to be either shouting loudly trying to be hard, or conversely sacrificing their entire fanbase to suddenly be all soft. (Later, I worked out I was probably wrong about that.)

A mate of mine told me about this great new band called The Wildhearts, who were from Newcastle – a city which I had actually been to, and a city not much different from my own, which again made it somehow resonate more than the idea of the Bay Area or the Sunset Strip in LA.

I remember tuning into Top Of The Pops in about 1993 and seeing them do Caffeine Bomb, an explosion of guitars and colour and melody and inevitable pyro. Soon after, we picked up the album which was an instant classic, perfect for the time – tons of tunes and twists and turns and of course a huge dose of creative swearing and drug references. They were just the right side of dangerous for us, while still being self-effacing and funny, and we lapped it up.

Highlights include the aforementioned Caffeine Bomb (purists will scoff that this came on the 1994 re-release, but hey, I missed it, okay?), Everlone with its 19 riffs a minute , each hookier than the previous, Greetings From Shitsville (see what I mean about creative swearing? Vital for the average 14 year old) and the lightning swagger of Suckerpunch, with its thousand-mile-an-hour choruses plus obligatory saccharine sweet middle 8, which I have to say proved somewhat influential for the budding songwriter in me. Their creative peak came later with Fishing For Luckies, but this exposure to huge guitars and huger tunes came at an apex of a time for me and many others, which cannot be underestimated. The Wildhearts are one of those bands who didn’t sell a lot of records but always seem to come up in conversation with other musicians or band crews, and in the most unexpected of places, such was their reach and influence for a while.

Later on I did a band with one of them, and that was pretty fun.