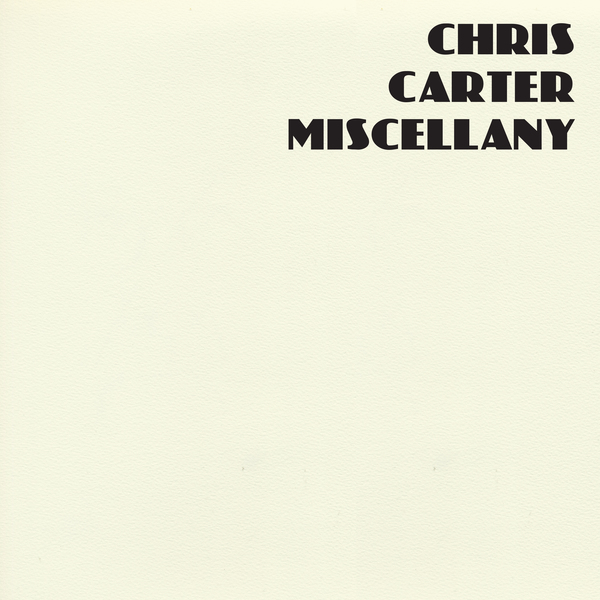 Chris Carter is, whisper it, a genius. Yes the word is bandied around all too often these days but in this case it is fully warranted as this quiet, sweet and unassuming man happens to be one of the most progressive and inquisitive minds in the UK music scene. Not only does he have the creativity to think of new and exciting sounds, pushing electronic music forwards via his work with pioneers Throbbing Gristle, Chris and Cosey, Carter Tutti Void or his solo work, but he also has the scientific brain to make the equipment to help deliver those sounds. Now we are treated to not only Carter’s solo albums all remastered and sounding better than ever but we are also gifted with a compilation of archive and never before heard recordings which is a true holy grail for those of us who love the outer reaches of electronic music.

Archival 1973 – 1977 is a collection thirteen previously unheard of tracks that show an artist in the midst of self discovery and one who is heading into the choppy waters of music experimentation. The tracks are often brief in running time put packed full of invention and intrigue making them moreish and addictive. Pop music drenched in space travel. Tracks like Runclodler, Nodes and Jet Age are playful and have a wonderful feel of someone slowly daring to look under a newly discovered boulder. The BBC Radiophonic Workshop influence is there but so is Carter’s well recorded love of the pop music of ABBA as throughout this collection crystal melodies appear and help cut through the darker edges of the vignettes (Variables being a case in point).

When it comes to the solo albums here you now see an artist fully formed, confident and content with the work they are producing. This does not however mean that Carter rests on his laurels and puts out weaker material smugly knowing people will buy it. In fact the opposite is true as Carter presents music that is thrilling, eccentric and full of genuine heart. 1985’s Mondo Beat starts with the cheerful disco-tinged Moonlight which is glorious in its optimism and lightness of touch, gently bouncing along to a skipping groove of a beat. The playful nature on Mondo Beat is one of its core qualities with the  industrial-Prince funk of Real Life and the scattered sheet metal slash of Mondo B being particular highlights. Yes you can tell that a lot of this music was constructed in the 1980’s but that never takes away from your enjoyment as it helps to highlight what a thrilling and adventurous decade that really was and how it wasn’t all shoulder pads and Duran Duran like these talking head documentaries would have us believe.

Disobedient is a different beast entirely. A collection of tracks taken from Carter’s 1995 Disobey tour, Disobedient is where we take a turn into the darker territories that Carter had been know for with his work with TG and also signposts the music he would co-create in the future with Carter Tutti Void. Of the studio albums contained in this box-set Disobedient is the real go-to as it is snakes and charms with its constant pulse and unsettling tones. The pace of the album is laid out on opener Pantavistiq which grinds along on a bed of pulsating rhythm and fractured, detached wordless vocals. Events get even more sinister on the following Pulsec which is an obelisk of deep tribal sonics. Pulsec swirls inside your head and twists your gut slowly growing in insidious and intriguing menace.

Each track on Disobedient is a worthy addition to the Chris Carter oeuvre but it is the closing track, Disobedient Redux, that is the true star of the show. This is the moment where Chris Carter the musical arranger fully steps out from behind the curtain. Over its eleven-plus minutes running time, Carter shows huge patience and understanding of storytelling via instrumental music as it is paced to perfection with each added texture emerging exactly when it should. Disobedient Redux’s hypnotic charm is powerful and all consuming. It builds and builds with a transfixing horror. Equally unsettling as it is beautiful, this is the track that feels like the true essence of Chris Carter’s music and should be the first track you play to anyone wanting to investigate his solo work. An essential track on an essential album.

1999’s Small Moon completes the box-set and once more we are thrown into a different universe as Carter takes us from the deep meditations and melodic electronic pop music into the gleefully sweaty world of techno and the more shadowy corners of dance music. Small Moon is where we are let loose to grind and gurn. Sexual music for sexual people. No limits, no boundaries. Free hedonism. Pulsating and thrashing, Small Moon is a sonic beast of a record and with the remastering sounds fresher than ever. Not a single track on this album feels dated or of its time. You could place any of these tracks into a set full of current techno tracks and it would not only sit snuggly in between them but also show that a few of today’s artists still need to up their game if they are to catch up with Carter’s work. Over its seven tracks, Small Moon is unrelenting in its passion for all things deep and happily distasteful whether that be on the unfolding epic of opener Arcadia, its off kilter follower Praxiz or the rapid-fire snarky cut of Reazymn which manages to display a multitude of personalities as it morphs and evolves through a myriad of time changes and instrumentation.

Small Moon does include moments of vital breathing space and insertions of light such as the beautiful Soho….3am which shares with Carter’s seemingly admiration for Drum and Bass music and the deeper ambience of Klypp’d which is a more positive relation to the work that Carter would do with the reformed TG under the X-TG banner.

Small Moon is a quiet gem of a record that stands as a true testament to its creator. Its fun, mischievous and overflowing with ideas that run seamlessly together to create a whole listening experience that is a joy from beginning to end.

Miscellany is a treasure trove of musical gems and is an excellent source of inspiration for those wishing to hear creative electronic music evolve over time via the hands of a true master of his craft. Due to his nature, Chris Carter would never refer to himself as a genius but we who already know, and those who listen to this box-set, will call him it anyway as the evidence is here for all to see. An incredible collection of music that needs to be heard and which now sounds fresher and more relevant than ever.