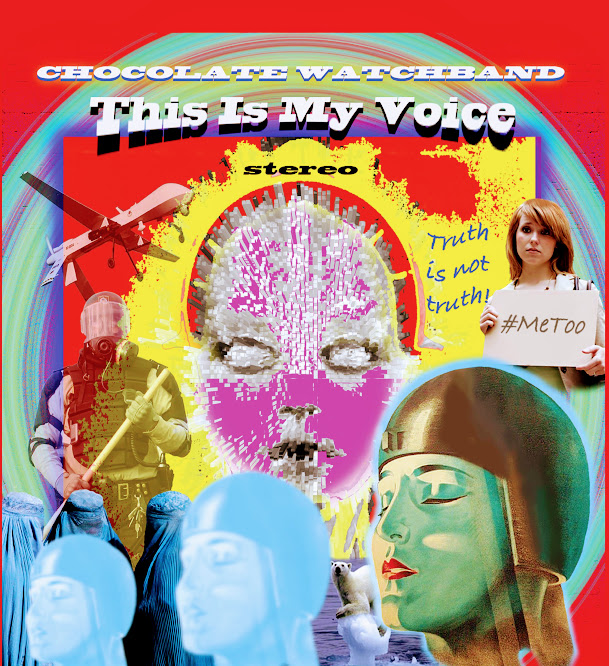 This Is My Voice

Sixties’ garage-psych legends, The Chocolate Watchband return for a new album, one that finds them turning their critical eye over an increasingly chaotic world.

It’s over fifty years since The Chocolate Watchband first emerged from the counter-culture movement on the west coast of the US. Since then so much has changed, but yet so little. On their new record, they cast a critical light over the continued decline of a society ruled by elites, an iron heel held over the masses, while we whip ourselves into frenzied anger at each other, shouting into the abyss of the internet. And of course, being the Watchband, there are some choice cover versions as well to complement their original material.

Lead single, Secret Rendezvous opens the album with a fuzzed guitar riff that introduces a grooving bluesy romp, complete with horns and pounding rhythms. It’s a link between their previous sound and the styles that they influenced through the decades, coming out not far from the driving style of The Soundtrack Of Our Lives. It’s a strong opener, marking that they are back with a renewed fervour and are not going to be content to simply rehash their classics.

Second single, Judgement Day follows, dropping back on a psych-blues motif replete with a gentle sitar riff that flows under a spurting harmonica. The song slowly rises up, telling the common tale of a let-go worker drifting in his thoughts of how to provide while cursing at the ineptitude of those who lead and the greed of those who suck and drain the spirit of the masses. There’s a growing anger within the song as it goes along. The guitar solo drops in like an Oasis classic, again making that link between their past and their impact.

It’s clear that in the lyrics, singer David Aguilar has focused on much of what he sees around himself, the inequality covered in the opening songs, while the title track, This Is My Voice, through its drifting psychedelia, focuses on the multitude of voices rising up. The song perfectly balances the oxymoronic ability we have nowadays to make ourselves heard with the idea that we are shouting into an abyss and straining to make our voices rise up above the parapet. His lyrics are poignant, yet cutting and critical at the same time and a great reflection of the modern age.

As to be expected on a Chocolate Watchband album, there’s also a good representation of cover versions. On This Is My Voice they tackle Bob Dylan, and their fellow Nuggets bands The Seeds and The Music Machine, but the highlight of the four is undoubtedly their version of Zappa’s Trouble Every Day. They speed the original up a touch, which gives it a whole new stomping rhythm that underlies the lyrics that are as relevant today as they were back in ’66.

On This Is My Voice, The Chocolate Watchband have returned strongly, with firm proof that there is still a fire of indignation in them that they need to let out. It’s great to have them back and on form and the record neatly rounds their circle. But here’s hoping there’s more to come in the future. What’s certain is that it looks like there will be material for them to write about for a long while to come.

Listen to Secret Rendezvous and Judgement Day below: