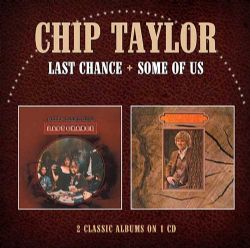 Chip Taylor – Last Chance/Some of Us

Some people are really blessed with talent. Chip Taylor born James Wesley Voigt is of course better known for being the author of the immortal “Wild Thing” popularized by The Troggs and Jimi Hendrix. He is also actor John Voigt’s brother and to the modern world uncle of Angelina Jolie. Having started his musical career in a country outfit entitled “Wes Voigt and The Town Three”, he then spent most of the sixties writing material for other artists (ranging from Willie Nelson to The Hollies). The seventies were certainly better suited to solo artists as Taylor and he put out a series of excellent albums between 1970 and 1975 before calling it a day on the music business for almost 20 years to become a professional gambler. “Last Chance” released in 1973 was Chip’s second solo album. Firmly anchored in the country paradigms, the record is full of lush harmonies with pedal steel licks in the background. Taylor’s country twang works marvels on songs such as “I Read it in Rolling Stone” and “I Wasn’t Born In Tennessee”. However the record is not purely traditionalist as the rock outro of the anthemic “Son Of A Rotten Gambler” proves. The lyrical content also distinguishes it from the mass of country-rock records that were released in the earl seventies with a whip smart sense of humour that permeates most of the songs.

The Follow-up “Some Of Us” follows a similar template but probably with a slightly more weary edge. Starting with the slightly orchestrated “Me As I Am” which Taylor follows with “Early Sunday Morning” featuring guitar picking “a la” Luther Perkins. “(It’s A Long Way) Back To The Heart could have easily been a hit for Glen Campbell if he had chosen to cover  the song. The jaunty “Funny Songs” plays the usual trick of marrying a rather depressing set of lyrics with an upbeat tune. It pretty much reflects Taylor’s attitude towards the music business while he was making the record. “If You Ever Saw Warsaw” is a typical tearjerker song. The gentle “Here Again could easily pass for a gentle John Denver song and the closing number “Some Of Us” is rumination on our failings as humans with spoken word parts. Hopefully we’ll get more of Chip’s seventies albums via Morello.

More Info on Chip Taylor can be found at his official website and on this Facebook page.