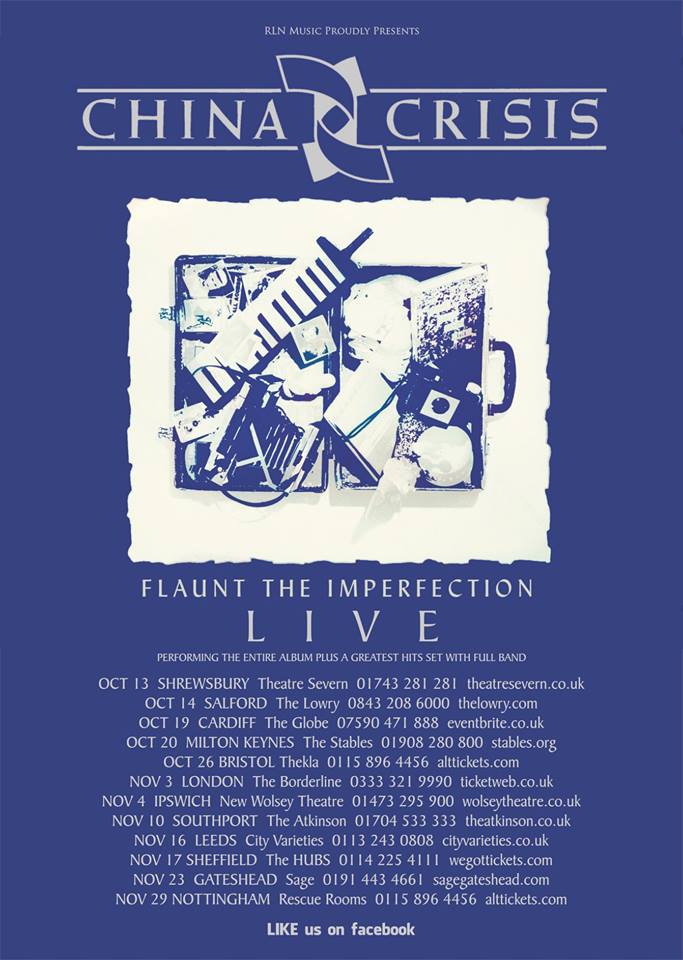 Amongst all of the music that was released in the 1980’s China Crisis released some of the most perfect pop you will ever hear. Immaculate production, lyrically intriguing, engaging instrumentation, you get all this and much more with the back catalogue of China Crisis. It is with this charge that they have decided to go on tour later this year to play in its entirety their stand out album Flaunt The Imperfection. Matt Mead catches up with lead singer Gary Daly in this exclusive interview for Louder Than War to discuss all things from the bands creation to what their plans are for the future.

Please tell me some of your background and where you both grew up?

Ed (guitarist Eddie Lundon) and myself grew up in Kirkby, a small new town just outside Liverpool. Our parents would have been relocated here from Liverpool sometime during the 60’s. We both attended Roman Catholic Schools meeting in St Kevins School for boys Europe’s largest Roman Catholic school for boys at the time. This would have been circa 1976.

What was your first musical memory?

Sat in my aunt Vera’s with cousins Colette and Marie watching Top Of The Pops. The Hollies were performing. I can’t remember which song, but i do remember they were not keen, saying something to the effect that they had gone all druggie, ha ha.

Who were your early childhood musical influences?

Kevin Kelly was a local lad he had a white Fender Stratocaster copy guitar. He would sit on the street corner playing away. Lots of us kids would watch and be very taken with the fact he could play songs we’d heard on the radio this would be circa 1973/4.

When did you start to get into more serious music?

Round about the same time. My elder brothers had albums by ELP, Bread and bands like that.

How did you both get to meet each other?

At St Kevins. Eddie was moved down into my class for truancy. It was there that we realised we both had a great passion for music and we both very vocal about it with each other.

When did you both start writing music?

That would have been 1978. We both started to learn other peoples songs which didn’t turn out well at all, both of us finding it very difficult but we did learn the basic format which in turn lead to us writing our own material.

Did you start to write music together at an early age?

Yes 16/17 years of age, round about the time punk was fizzling out and new wave was making an impact which we found very inspiring. Talking Heads, Magazine, David Bowie were all big influences at this period.

How did China Crisis form?

From the ashes of a local group called Glass Torpedoes. Ed and myself had been involved with the band but with different line up’s. When those bands broke up Ed and myself continued to write together which was around 1979/80.

Did you go through many line ups before you settled on one that worked?

Not really. We worked with Dave Reilly (drummer) for a while but we always knew it was Ed and myself that would be the core of the band. The whole band thing was a means to an end, hence the first album sounding the way it does. Our main interest was seeing/hearing our songs develop by whatever means, whether that be band/drum machines/electronics.

One of your early influences, and probably still are, we’re Steely Dan. What was it about this band that you liked?

Ed and myself became aware of Steely Dan as school kids. The first records were heard by them were Aja and Royal Scam. The originality of the song writing and also the production was quite outstanding, making them very very unique to listen to, to our young ears.

What 3 memories from the 80’s do you look back on and are happiest with?

Recording at the Manor, Oxford , England, Aug ’83 with Mike Howlett.

What are your 3 favourite 80’s tracks by China Crisis?

Jean Walks In Freshfields, Performing Seals, The Souls Awakening (but this changes every time I am asked, ha ha).

Fast forward to the present day and you’re going on tour later this year to play your classic album Flaunt The Imperfection. Why have you chosen to tour this album now?

For me this album seems to be the China Crisis album that people most identify with and it has stood the test of time. I think it was the perfect musical storm for us. Phil Brown engineering, Walter Becker producing and Ed and myself writing some of our best songs.

Do you have plans to record new music in the future?

Last question: what’s on your playlist at the moment?