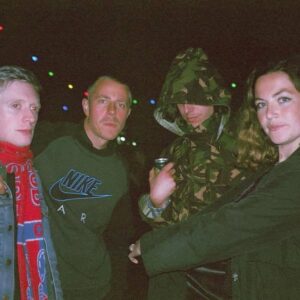 (Lost In The Manor Records)

CHILDCARE played some of their first shows at the Reading and Leeds festivals and soon released their debut single ‘Omega Grey’. Gaining some air time from Annie Mac, Huw Stephens and Steve Lamacq, this fired on the band to keep the tunes coming in the form of Film Club.

For a 3 minute 13 seconds, there is plenty crammed in here! Some really nice riffs and motifs lead into a killer guitar hook that drives the track and gives it it’s overwhelmingly funky sound! It’s loose and full of call and response vocals between Cares and Topolski which give it a really nice post punk feel. Like The Fall maybe? And like The Fall, Film Club has a really nice chunky baseline that keeps the track chugging along.

It’s a great track. Have a listen now!

CHILDCARE will be supporting Bastille on the following dates: