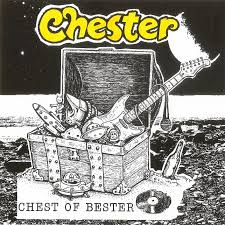 Back From The Dead Records

Career round up of Punk Pop nutters Chester, featuring selections from the albums Malepleasurability and No Light Here….LTW’s Ian Canty ignores the cries of nepotism and instead enjoys the lo-fi worldview of Brentford’s finest…..

Some things that are hidden away can hold the best delights and so it proved with the band Chester – in existence from 1995 to very recently, they went through three changes of line up which vastly altered their musical approach over the years as we shall see. One thing I have to address first – just to stifle any calls of favouritism – I have, on occasion, acted as an auxiliary vocalist for the band in their live performances – but all the material featured here was in the can in advance of that and I was a fan of the band long before the stage beckoned. So I can’t exactly claim impartiality but I will endeavour to try and tell the truth.

The first six tracks on this new compilation are from Chester in the original duo format, comprising of band mastermind Rob (guitar and vocals) and Pam (vocals). Scratchy, “lof-fi” if you like, but always tuneful and addictive. They build up to an excitable climax on opener “Cherry Bomb” and the strangeness that is First Pammy In Space. But for me Looking For You sums up early Chester – fast, flip and catchy, like it could have been made up on the spot at first examination, but clearly put together with care and love – the spirit of DIY 1977 at heart within its own unique worldview.

Then come selections from the Song About Nothing EP and Malepleasurability album, where Tes and Chris on drums and bass respectively have joined Chester, bringing them up to a four piece. These tracks seem to me to answer the rarely posed question: “what is the missing link between, the Swell Maps, the Rezillos and Michael Bentine’s Potty Time?” Though still in the jokey Punk spirit of the Notsensibles, featuring hard logic like Don’t Go Swimming (With An Anvil On Your Back) which has a great Punk ending, they also look inwards and outwards for inspiration. Song About Nothing is harder edged, with some great guitar, a song of disdain at both self and others.

Though because of their humour you might be tempted to label Chester as only a comedy band, they’re still able to pull out the odd serious observation. Like the one on the generation gap, a near-tearjerker in fact, in “Playing In A Band” (there is some lovely understated keyboards on this song too). As if to prove there is more than one string to their bow, we have some great Garage Rock in Billy Bunter’s Postal Order and a crushing but brief critique of Tony “What WMD?” Blair. Ridiculous has some of the best “love song” lyrics I’ve heard in a long time, grounded in hard reality not dreamland.

Pam left the band after this record and the No Light Here LP found the band slimmed down to a, cough, power trio. The Buzzcocks tribute I’m In Love With Someone (Who’s In Love With Someone Else) might be a touch obvious but it works and the scathing self-criticism of Songs Monkey Would Write is a joy to behold. There’s also a spot-on homage to the Damned in Back In The Night, but this period of the band looks again applies a large dose of farcical humour to problems that could happen to anyone (anyone called Rob Chester that is), accidentally setting fire to a girlfriend’s pet or attending a naff shindig among others (“Fuckin’ Party”).

Chester also spoof both Emo and Goth in Tickle Me Emu and Goth Classic, but to show they were not mere court jesters to the early 21st century Punk scene, they pull out some sneaky perfect Pop in the form of Girl Called Summer and Happiest Day Of My Life (that joyous point where the Undertones meet Power Pop meet Tommy Cooper – that is their magic in a nutshell). The CD ends fittingly with the batty Lime And The Coconut (though there is a crazy version of Billy Bunter as a hidden track).

We can only hope this is not “all she wrote” for the Chester story – I know for a fact that Rob has enough choice material stored up for a third Chester LP that would almost certainly be their finest half hour (some of these songs were included on the Derita Sisters album Legends Never Die, a fine work in itself). But that is for the future. For the time being let us look back awhile and appreciate Chest Of Bester for what it is – a vital document of a sadly overlooked but ace outfit.