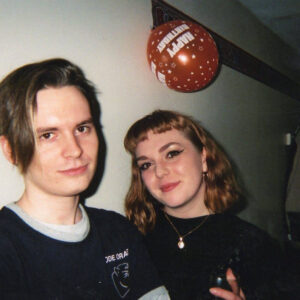 Blending indiepop and trip hop Nottingham duo Cherry Hex and the Dream Church released their debut EP at the end of 2016 and today are Louder Than War’s new band of the day.

Glockenspiel and bass guitar; perhaps not a classic combination but one which is used to stunning effect to create the ambient dream-pop of Nottingham duo Cherry Hex and the Dream Church.

Forming in their first year at Nottingham Trent University the pair have been together a mere 12 months but in that time have self-released a stunning debut EP, Tea of Tears, and played with the likes of Let’s Eat Grandma and GIRLI as well as bagging a spot at this year’s Nottingham leg of Dot to Dot.

The four-track EP layers the mesmerising vocals of Maddy Chamberlain with the dark ambience of Alex Blake’s bass and the tripping beats and tinkling glockenspiel to create songs which are dreamy, smiles emerging from the shadows. There’s more than a touch of classic trip hop here as the soft vocal and emotional observation cased in downbeat lyrics plays with the electro crackle and pop bringing to mind Portishead. The simple but catchy percussion keeping it hypnotic but never stultifying.

Live the band are equally captivating, the sound blooming much bigger than the sparse set up allows you to imagine possible. Audiences stand rapt, smiles breaking across their amazed faces with every turn, every surprisingly intimate word.

There is imagination in the set-up, particularly to get such a full sound sparsely driven out of the studio and onto the stage without losing any of the range. But more than this there is an interesting prospect of where this may go – only a year into being, and a handful of tracks released can this sound provide enough variation in more of the same or are Cherry Hex and the Dream Church just warming up for an ever more intriguing trip hop indiepop hybrid sound.

Cherry Hex and the Dream Church play Dot to Dot Nottingham on 28 May 2017. You can find the band on Bandcamp, Facebook and Twitter.

All words by Sarah Lay. You can find Sarah on Twitter and more from her in her LTW author’s archive. You can find her full portfolio of music writing here.