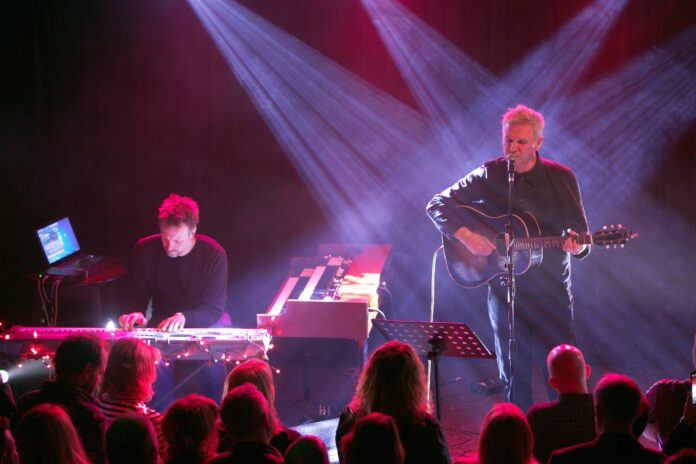 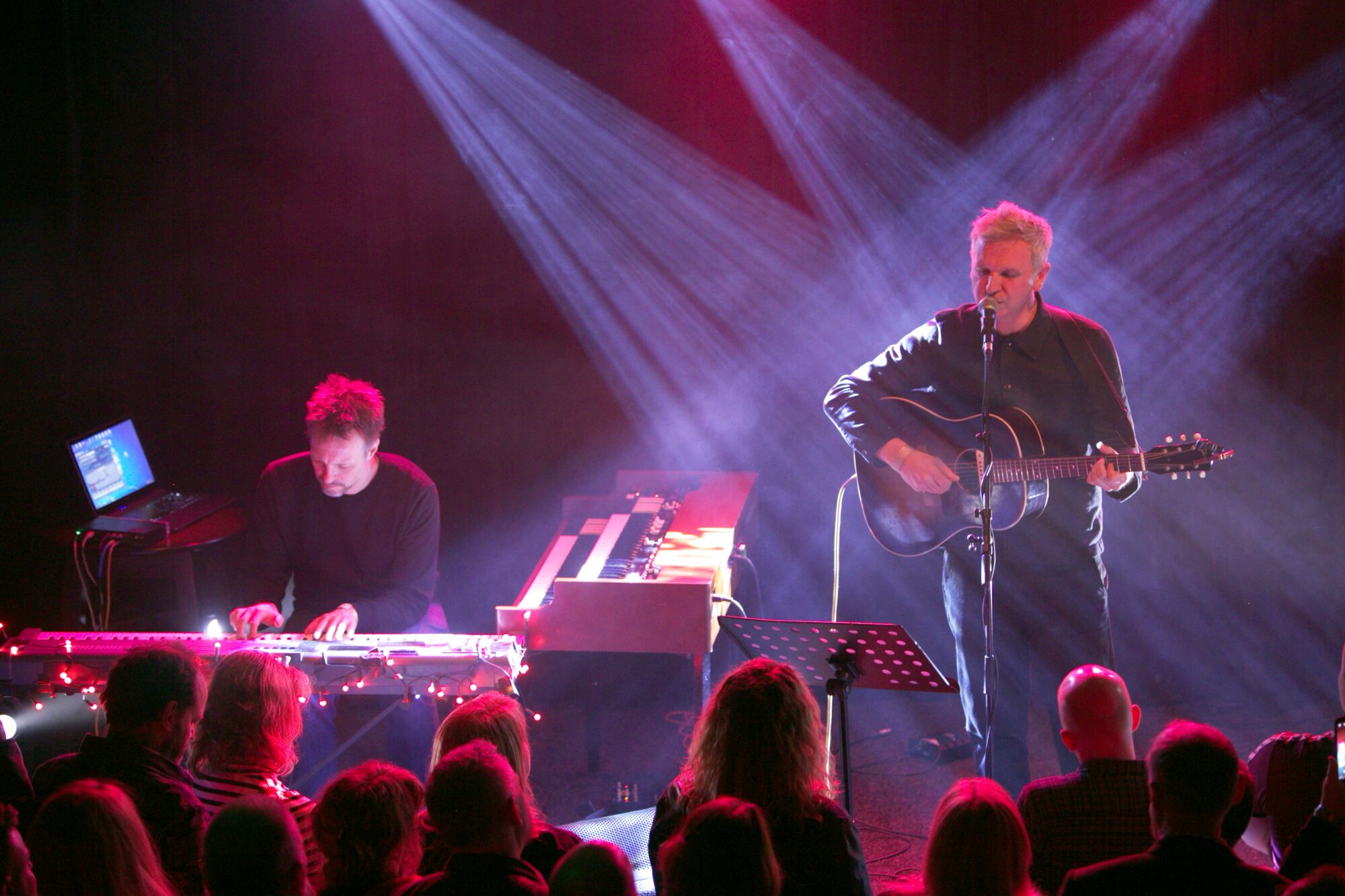 After a seven-year break from live shows Cherry Ghost – aka Simon Aldred – made his comeback in support of Independent Venue Week.

Seven years ago in this very venue, Cherry Ghost played a set full of his trademark melancholic pop gems to celebrate 25 years of the legendary Heavenly Records….then total silence on the live front.

Cherry Ghost is basically the vehicle for songwriter Simon Aldred, who was on acoustic guitar and he was joined by Christian Madden on keyboards for his long-awaited return to the stage. As Aldred pointed out as he wandered onstage to big cheers from the long-suffering faithful he had “been busy” as a songwriter, including for Liam Gallagher, but his subtle songs are a million miles from the lesser Burnage brother’s tedious lad rock. He kicks off with the beautifully constructed Don’t Leave Me Here Alone, and says he’d had to download lyric sheets to learn the words but was pleased to find his songs were “mostly good not shit”.

As he relaxed Aldred was right into his stride with the wistful My God Betrays, which feature some superlative organ playing from his regular collaborator Madden (who had hot-footed it straight from rehearsals at the Brit Awards in London.) It’s not all downbeat stuff as the pair launch into the comparatively uptempo Thirst for Romance, as fans call out requests in this intimate venue, but even his Aunty Pat who is at the back of the room couldn’t get a nod for a favourite song as her nephew wisely stuck to the songs he’d learnt.

It strikes you after a few songs that these are sort of tunes Roddy Frame might be doing, but sadly he is even less active on the live front than Aldred. There is a touch of John Bramwell on False Alarm, and a bit of Richard Hawley on Herd Runners, which is the level of songwriting he is working at. But Aldred is no copyist, he is a master of a cunning hook and wistful, oblique words, and it’s little wonder he was an Ivor Novello winner for the anthemic People Help The People as the audience swayed and joyfully sing along. 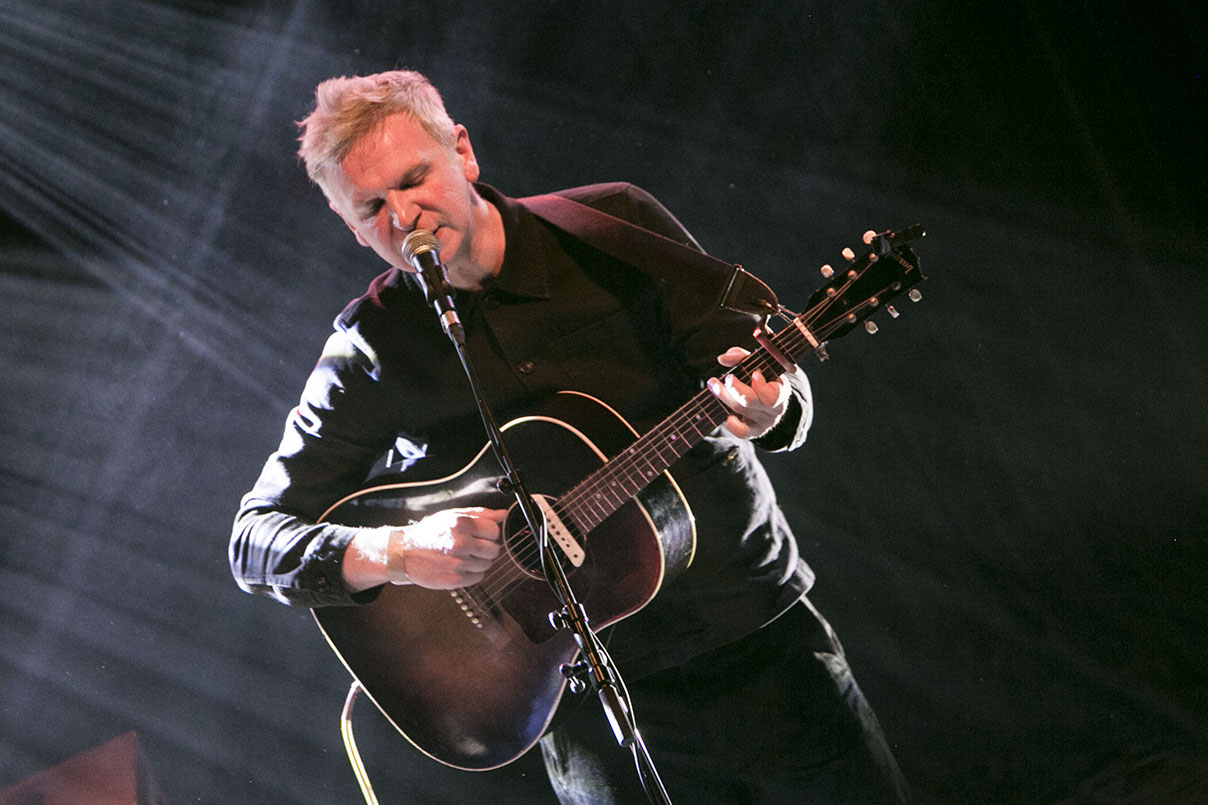 Aldred muses that he was going against the grain doing a gig with no new material, but frankly, no one in the audience could give a damn as they are just delighted to see him back onstage. It’s not all melancholic slow numbers, as Fragile Reign was full of Madden’s soaring keyboards that create a decidedly seventies feel, like something James Taylor might have written which is high praise indeed.

In many ways, Cherry Ghost and its many lineups are just a name, but tonight Aldred and Madden are so in sync that they manage to make a duo sound like a whole lot more, especially on the stately Dead Man’s Suit, or the old school gospel tinges of Please Come Home, that he donated to the fundraising Manchester Aid to Kosovo album, which could have been a Gram Parsons outtake. Much to the delight of the crowd, his richly deserved encore finishes off with a heartfelt version of the wonderfully bittersweet love song Drinking for Two that left no one in any doubt that their hero still has it. Given the standard of songwriting on show here we can only hope that the next iteration of Cherry Ghost don’t leave it until 2029 before they once again take to the stage.