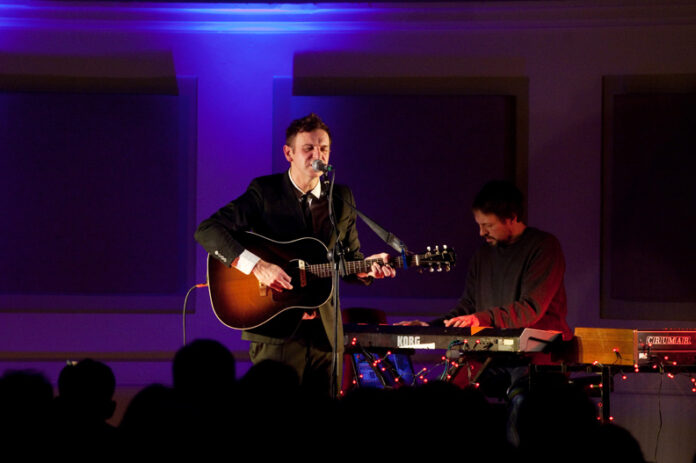 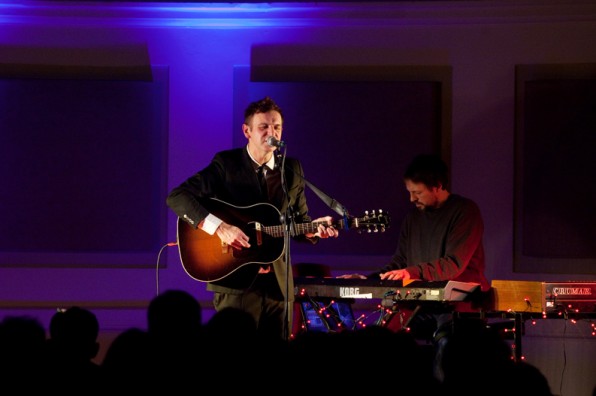 This photo of Cherry Ghost and the other on this page © Hayley Taylor.

Hallé St Peters is a formerly derelict Anglican Church which has recently been restored. One of the first public concerts to be held there, just before Xmas, was by Cherry Ghost who entertained the audience with a set culled from the Cherry Ghost back catalogue as well as a smattering of new songs, ones which will no doubt feature on the new Cherry Ghost album, due out in Spring this year. Louder Than War’s Fergal Kinney (words) and Hayley Taylor (pics) were lucky enough to be in the audience.

It’s three days before Christmas, and nestled slightly to the north of Manchester’s city centre glows Ancoats’ St Peter’s Church, a former parish church left to decay in the early 1960s and narrowly escape redevelopment into housing in the decades before its recent restoration. Cherry Ghost – initially an alias for Bolton solo artist Simon Aldred – tonight play the first of two Christmas Shows at St Peter’s Church marking the end of a few quieter years for Cherry Ghost and heralding the imminent arrival of the forthcoming third Cherry Ghost album, titled ‘Herd Runners’ as Aldred nervously confesses onstage tonight. Cherry Ghost this evening are reduced to just the black-suited Simon Aldred and a keyboardist, with occasional harp (from highly gifted support act Edinburgh’s Esther Swift), and Aldred launches instantly into the sublime torch song ‘People Help the People’ from Cherry Ghost’s debut ‘Thirst For Romance’. Though ‘Thirst For Romance’ was a top 10 success in 2007, ‘People Help the People’ has found a new audience through its re-imagining by female solo artist Birdy. The sparseness of Birdy’s rendition is carefully echoed by Aldred here, his ached croon tonight carries song after song with minimal accompaniment. 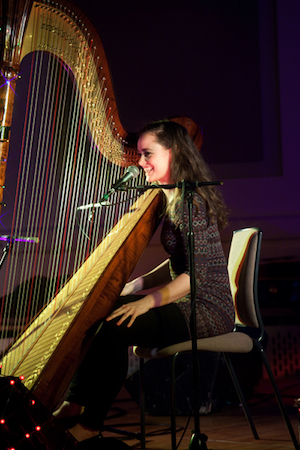 After opening with an airing of a few of ‘Thirst For Romance’s most popular offerings, Aldred comes good on his promise that tonight will be about airing material from the now-recorded follow up to 2010s ‘Beneath this Burning Shoreline’. Though we are repeatedly reminded that the arrangements on the album will be much more “massive” than tonight, even with minimalist instrumentation the new songs stand out as Aldred having really found his voice as a songwriter. ‘Herd Runners’ itself is nostalgic and sweeping, whilst the portrait of someone having been stood up in a bar in ‘Drinking for Two’ is Cherry Ghost at their melodramatic best.

The quiet rage of the cinematic ‘My God Betrays’ is a highlight tonight, finding perfect relevance in the gothic pageantry of St Peter’s Church. Indeed, much about the setting of a church suits Cherry Ghost; ‘All I Want’, the lead track from Simon Aldred’s recently released side project ‘Out Cold’, has much of the vestibule about its confessional and . Back in the hands of Cherry Ghost, ‘All I Want’ has been stripped of its late 80s dance beat and buzzing synthesisers to reveal one of Aldred’s most highly accomplished songs, a modern update on Bronski Beat’s ‘Smalltown Boy’ and his first lyrical affirmation of his coming out as gay. Though regularly compared to Elbow for a shared kitchen sink sensibility, Aldred has always been notably more concerned with the murkier and less certain aspects of the human condition than Elbow, though delivered with a gallows humour and eye for detail to rival that of Guy Garvey. The anticipatory silence from the audience in the spaces from one lyric to the next reveals a reverent audience hanging onto Aldred’s every word, at times tonight Cherry Ghost muster an unrivalled intensity. Even the unexpected festive cover choice of school-nativity favourite ‘Little Donkey’ manages to carry a certain grandeur and soulfulness.

Though 2010s often haunting and occasionally euphoric ‘Beneath This Burning Shoreline’ failed to find the success of its predecessor, it seems that Cherry Ghost have spent the ensuing years crafting something that appears from first glimpse to be amongst their best work. If tonight is just a hint of what is to come, 2014 could be the year that Simon Aldred gets the recognition as the serious songwriting force that he clearly is. And if not, the congregation at St Peter’s Church tonight will certainly not diminish.

Now check out Hayley Taylor’s photo gallery from the show:

All words by Fergal Kinney, all photographs by Hayley Taylor. More writing by Fergal on Louder Than War can be found at his author’s archive.