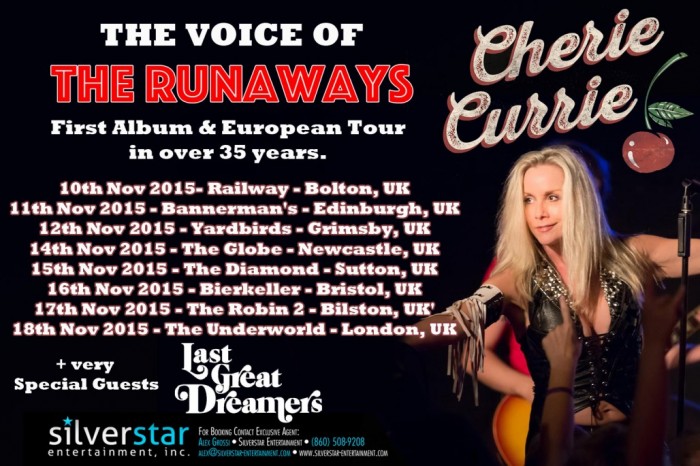 Cherie Currie, former singer for 70’s girl rocker band, The Runaways was forced to cancel the Bristol date of her current UK tour due to a virus that caused her to lose her voice. Cherie had spent the day of the gig at the hospital trying to combat the virus with medical assistance and hoped to be able perform.

The gig at the Bierkeller went ahead as planned with support acts Idestroy, Flowerpots and Last Great Dreamers playing as usual. But as soon as Cherie began to attempt to sing at the start of her set, it was obvious that her voice was gone.

Stopping the band, Cherie was visibly upset as she explained that she had caught a virus at one of the previous shows. Apologising, Cherie stated that she would arrange for anyone with a ticket for the night’s show would be given free entry to her London show on Thursday 18th November at Camden Underworld, where Special Guest will be legendary rocker, Suzi Quatro.

It unknown whether the show tonight in Bilston will go ahead.

LTW photographer Melanie Smith was present at the first date of the tour in Bolton and took these fantastic exclusive pictures of the night (which were meant to accompany our review from Bristol).

Check out Cherie’s website here  and she tweets here