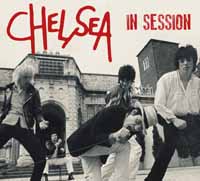 A 26 track compilation of the veteran Punk band’s BBC recordings from the 70s, featuring a 1977 John Peel session amongst others. Louder Than War’s Ian Canty looks at Gene October and Co’s adventures at Auntie Beeb’s place.

This collection, which is basically a straight reissue of the Captain Oi! set from 2000 called The BBC Punk Sessions in a different sleeve, shows Chelsea at a time when they were still viewed as ‘sort of’ Punk contenders. Though by the time of the last recordings here in September 1979 Punk had long been declared over and gone, they were regular visitors to the BBC’s studios and possibly one killer track away from making a breakthrough. It might seem far-fetched now, but you have to remember despite ‘Punk Is Dead’ in 1979 the Ruts, the Members and even the Upstarts all enjoyed fairly big hit singles.

Chelsea never had a Sound Of The Suburbs or Babylon’s Burning up their sleeves, which is not to say they had nothing to offer. The self-titled debut album had plenty of good tunes (they make up the bulk this compilation, along with the singles) but the sad fact is it arrived a good year or so late for it to have made an impact.

Despite Gene October’s sometimes rum behaviour and pronouncements, Chelsea were a decent prospect in 1977, below the top bands but garnering some praise in Sniffin’ Glue. The John Peel session from that year, which commences this set, features the ‘Right To Work’ era of the band and is full of dumb 77 Punk goodness. I imagine a fair few Punks had their condenser microphones at the ready for this one to be set down on tape. Only October would have the brass neck to write a song entitled Pretty Vacant after the Pistols and Blind Date takes a tilt at the Damned. High Rise Living might sound clichéd in the extreme now but I still like the build up of the chorus and No Admission still cuts the mustard for me in the speed Punk stakes.

By the time we catch up with Chelsea and Peelie again in July 1978, their window of opportunity (to get a foothold on the charts in the initial Punk storm) had passed. October and James Stevenson remained from the previous summer in a totally reshaped band. With only the replacement of drummer Steve J Jones for Chris Bashford after this four song offering, this line up (remarkably resilient in Chelsea terms!) would see out the remainder of In Session, taking in Kid Jensen and Mike Read sessions (there must be all kinds of jewels recorded for these shows and later Richard Skinner which have barely been touched because the titular DJs aren’t anywhere near as hip as JP) and a live In Concert performance.

The John Peel 1978 set has one of their (or Mark Perry’s) best tunes in Urban Kids and the soulful Come On (miss-spelt as Come One tsk). Always liked that one. I’m On Fire is a good early trailer for the album that was still a year away, but in a music scene that was moving away from Punk towards something more experimental and arty, it wasn’t going to be quite enough. This is for me the pick of the four sessions here, the band are on keen form, some great tunes and the lyrics are good too.

The following four numbers are from the Kid Jensen Show a mere three months later signify a consolidation. The move from Peel’s late night to early evening radio would have put them more in the public eye (or ear). The very Clash-style of 12 Men is the star as we get two repeats from the last session (to be fair the tracks Urban Kids and Come On were their best songs) and a version of Trouble Is The Day (which would also feature on their first LP).

It was almost a full year later when Chelsea re-entered the corridors of the BBC, this time armed with four songs to cut for a Mike Read session, two of them coming from their recently released debut album (Fools and Soldiers plus Trouble Is The Day again) and the other two (Look At The Outside and Don’t Get me Wrong) would re-emerge in different forms as the two sides of a 1980 single. It’s a fairly good session but nothing much to knock your socks off (the toothsome Read must have been somewhat enamoured as his single under the guise of the Trainspotters High Rise had something of a Chelsea feel about it).

All of these studio tracks were recorded in the usual no-frills but uncluttered BBC way, which was often the best way to hear these bands. Sometimes their own efforts were spoilt by overdone or just plain bad production. Chelsea are a case in point as their album always sounded a little too staid and not as dynamic as it could have been. The versions on In Session are sharper, more carefree.

I have to say that the live section which ends this disc is an occasionally out of tune but spirited performance and portrays a band far from the loser Punk image. Chelsea always thrived in a live context, where their weaknesses (i.e. some of the lyrics) would be overcome by October’s voice and showmanship plus the band’s musical smarts, as they are here. The, erm, weepie All the Downs is dramatic if a little wobbly, Free The Fighters powerful, and the section finishes with a singalong of Urban Kids (3 times on this disc, good job it’s a top song!). Despite a good showing this line up would not last too much longer with Stevenson being spirited away by October’s favourite band Generation X. With a whole new band Gene would eventually cut what was probably Chelsea’s best record in Evacuate.

In Session serves well as an introduction into the world of Chelsea as it features the pick of their material from 77-79 played in simple but effective style. Also, it is yet another piece of evidence to support the theory that a great many of the early Punk bands did their best work at the Maida Vale studios for broadcast on the Peel show.