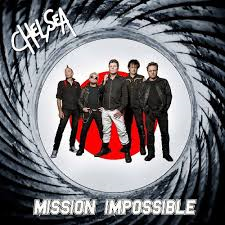 New album from original Punk band Chelsea, the follow up to Saturday Night And Sunday Morning….LTW’s Ian Canty launches into another in his lengthy series of reviews concerning Gene October’s band….

To use the words of the late great Betty Marsden in “Round The Horne”, I seem to have reviewed Chelsea on Louder Than War “many, many times”. But let us ponder again a band that are not only a colossal 41 years into their existence, but also almost 41 years now since they first broke up! Yes there have been certain periods of downtime, but Gene October has shown an admirable resilience whatever your viewpoint of his musical offerings. One thing is though, how you actually approach recording a new album so far into a career? Without being in that position, it is pretty difficult to comprehend how one would tackle the making of a LP all these years on.

I suppose you would want to better all that has gone before, but that’s a pretty tall order all these years on, with “the classics” now being enshrined in the early Punk narrative. Maybe try something completely different? Or perhaps try and keep up the quality and sound to please the fans that have stuck by you, through thin and thinner in Chelsea’s case? I’ll give credit though that they want to record new material in a climate where, I would speculate, most just want to see them run through those old standards from yesteryear. Though they do stick to their tried and tested methods, the creative pulse is still there, even if youth has done one some time ago…….

The current line up of Chelsea draws from their 70s/80s heyday: James Stevenson is still there from the 1977 edition, whilst fellow guitarist Nic Austin (also of the great Church Of Eon) masterminded “Evacuate”, arguably their most satisfying album project. Bass player Matt Sargent was involved in the 90s circa The Only Alternative and relative newcomer on drums Lee Morrel completes things on the musical side. As always Gene looks after centre stage.

Drawing aside the slightly puzzling incongruity between the album title and the James Bond opening style sleeve, it’s clear from the first listen that for better or worse Chelsea have stuck with what brought them to the dance in the first place i.e. tuneful and punchy Punk Rock. Nothing wrong with that of course and over the running time of Mission Impossible the band demonstrate they have retained their winning ways with an upbeat tune and Gene’s in pretty good fettle vocally as well.

Given the fact they’ve stayed close to their core strengths, it is perhaps inevitable that they reference their past in both the music and words in with a Magpie-like zeal. Broadly speaking, sonically we’re looking at an update of the same sound as Evacuate, with a few looks back to the 1970s sound too. Lyrically No Admission (I Don’t Know And I Don’t Care) and their Pretty Vacant are both referenced (“London’s full of places I don’t go” from that track has been transplanted into Just Like Me). Sun Stop Shining has a little of Last Drink about it, but is still a highpoint, anthemic with some great guitar lines.

It’s no real surprise that thoughts of age and mortality play a part in the lyrical occupations on display, with both the considerable distance between now and 1976 and the respective ages of those involved. The title track explores the quickness of the passing of time and also the pointlessness of trying to evade the aging process. A mid-paced effort that sets the tone for the LP, it has a whiff of Urban Kids about it, but those kids have long since grown up and realised the true worth of time. It’s a theme returned to later on in Sands Of Time, a decent change of pace with Stones-like acoustic number (a style previously touched upon way back on Original Sinners), though perhaps the chorus could have done with a bit more work.

Though the album is solid enough, there are a few tracks towards the middle of the LP, that although they chug along nicely, aren’t too memorable. Just Like Me, with its catchy refrain and humourous touches (somewhat rare in Chelsea-Land) and the spritely Let Me Go stand out. Having said that, Mission Impossible does end strongly, with the aforementioned Sun Stop Shining and some nice Reggae off-beat touches on Something In The Air. Though cynicism is rampant lyrically for the most part, it is alleviated somewhat by the positive and optimistic closing number Make It Happen, ending the record on a high.

I’ll grant you it is unlikely that Mission Impossible will challenge either the debut LP or Evacuate as what is seen as the best Chelsea record (or indeed many of the tracks will supplant Right To Work or Urban Kids from their live set-list), but it is far more fun than one could reasonably expect from a band 40 years plus on from their formation in 1976. It is also very dexterous musically, with Austin and Stevenson shining on guitars and a solid rhythm set in place by Sargent and Morrell, with the production being loud and clear to best demonstrate their talents.

Occasionally October’s vocals sound a little bit worn at the edge, but overall that works in their favour bearing in mind the context of the songs. Sometimes you do wish that they would strike out in a different direction, something not beyond the band when you realise the various talents involved, but I suppose that is not the Chelsea way. Nevertheless it is a decent entry into the canon, mission accomplished.