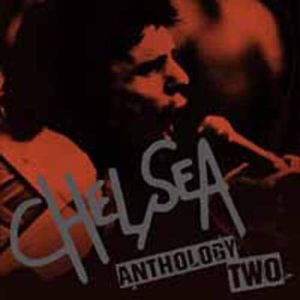 Second part of Westworld’s Chelsea re-issue programme features three albums issued during the 1980s, “Original Sinners”, “Rocks Off” and “Underwraps”- Ian Canty looks at the wilderness years of the band that appeared to be permanently encamped there

Chelsea, by this point of time, were possibly the least fashionable band in the entire world. The last drips of the “New Punk” of the 80s, which gave the band a second wind, had long since gone down the plughole and 1976 was a dim and distant memory. There was no fond nostalgia for Punk, bar the upcoming (and awful) Alex Cox film that was either called “Sid And Nancy” or “Love Kills”. In the UK things were gearing up for the C86/Shambling scene, a reaction to the insipid pop music that was blighting popular music. There was nowhere for Chelsea to go and any reasonable person would have given up at this point.

Well of all the words to describe Gene October “reasonable” isn’t one I would automatically choose and to be fair one thing he wasn’t was a quitter so yet another line up of the band decamped to Pistols’ producer Dave Goodman’s studio for all of a week to record a new LP “Original Sinners”. That it was put together “on the hoof” is undeniable – the drum sound is as thin as a rake and appears to have been recorded in wind tunnel. I can remember buying the vinyl version and it was so bendy you could almost fold it in half, one step up from a flexi-disc – everything seemed to have been done on the cheap. But this record is not without merit and taking the slightly dodgy acoustics and penny-pinching aside, this is one of the better records in the Chelsea back catalogue.

A gent called Tim Briffa had joined the band and assumed the place previously occupied by Nic Austin of guitarist and songsmith. Whilst not as good as (and completely different to) “Evacuate”, his songs are the saving grace here, more influenced by the Rolling Stones late 60s adventures and the Velvet Underground (on set closer Andy’s Blade’s “Amazing Adventures” they border on Syd Barrett style Psychedelia – October’s time down at “Alice In Wonderland” had not been entirely wasted) than the Pistols and the Clash. “Monica Monica” and the single “Valium Mother” are particularly effective. Hints of the old Chelsea sound live on through first track “Two More Hours” and “Revolution No 9” and Gene obviously still had his gift of nicking other people’s song titles! He lives out his Mick Jagger dream on the anti-Tory “Maggie’s Men” and the harp driven “Believe Me” but the gentle spacey strum “My Girlfriend” is the real winner here.

Of course nobody was really listening but having never been bothered about that previously, Chelsea reconvened with Goodman a year later for “Rocks Off”. Starting with a Hare Krishna chant, the synth-led ballad “Fools Paradise” lets us know in no uncertain terms that this isn’t another “Alternative Hits” and any poor sod picking this up expecting 77 Punk was to be sorely disappointed. Very much a “rock” album and of its time, “Rocks Off” seems the work of a band not knowing entirely what it was all about. A far lesser document than “Original Sinners”, this is a bizarre mix of the Rolling Stones (again), queasy 80s production values and rock n roll basics. Briffa had left by that time and October writes most of the songs here, which history has shown isn’t a good thing for Chelsea.

It’s a very jaded sounding record and the good points are the ballads – the “Stones do Country” of “Give me More” and the stately 60s psych pop of “Inside Out” (yes I can’t believe I’m typing that either, another feather in the cap of Andy Blade’s song-writing muse) are the best songs here and no coincidence they’re both written by outside parties. It’s also not down to chance that the only bonus track on this set is an unconvincing “Sympathy For The Devil”. Looking back it is difficult to see who they thought would actually buy this record, not Punk diehards that’s for certain and the more hard-rock orientated wouldn’t bother either. So far away from the commercial sound of the time (if I’m being kind “Little Princess” has a touch of the Psychedelic Furs about it) that the chances of making any impact were slim to none. And so it proved.

After this substandard effort you would have thought it was finally curtains for Chelsea – they must have by now tested their original fans far past the breaking point and with no-one to take their place, who would even bother to put out a record by them. But no! Miles Copeland, presumably bored twiddling his thumbs after the Police had split up, offered the band another chance with IRS in 1989 and consequently “Underwraps” appeared. Somehow October had convinced some decent names to feature, even getting Topper Headon to sit in on “Come On” (the Earl King song, not their own). Steve Tannent ex-Menace joined on guitar, “Evacuate” era bassist Paul Lincoln returned to the fold and original Police guitarist Harry Padovani turned up too.

A decent but straightforward cover of the Clash song “Somebody’s Got Murdered” and “Cheat”, which hinted at the band’s former glories started things off okay, but after that you can see that Gene had his eyes on a bit of ex-mucker’s Billy Idol’s American success and excess (“Give Me Mercy” being the best example of this). That this push for fame didn’t come off was no real surprise, but you can’t knock a trier. While certainly a superior record to “Rocks Off” (“Nice Girls” is pretty dynamic and the production throughout is nice and clear) the songs aren’t up to much, the percussion led “Tribal Song” sequel shows up lyrical defects clearer than the more up-tempo numbers.

So in short, “Original Sinners” – a good LP that would have been vastly improved with a decent production, “Rocks Off” bar a couple of tracks a bit of a duffer and “Underwraps” sounds good but lacks depth and the sure touch of a decent songwriter. Overall an interesting collection but not one for beginners who would be best advised to start off with Volume One.

After this latest setback Gene and Chelsea looked so washed up the could have appeared in a dishwasher commercial, but somehow through sheer will, they came back for more as the nineties dawned, which you can read about soon!

Chelsea Anthology Volume One here . Chelsea are on Facebook here.