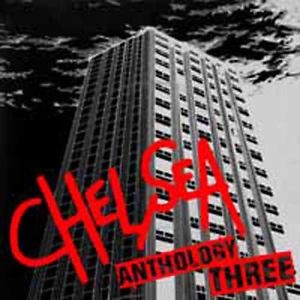 Final part of Westworld’s Chelsea reissue programme sees the band into the 1990s with the albums “The Alternative”, “Traitors Gate” and 2005’s “Faster Cheaper, Better Looking”…Ian Canty investigates the later recordings of the band that would not stay down for the count….

After their downbeat late 80s output and a period laying very low, somehow “Evacuate” mastermind Nic Austin was enticed back on board the Chelsea ship for the 1993 LP “The Alternative” and strangely it worked. Austin had a gift for catchy, anthemic songs with flashy guitar parts and this record proved that it was still in full working order. Chelsea, possibly for the first time in their career, sounded positively chirpy here (they could tend to be a little po-faced on record in the past….). Though very much in the mode of “Evacuate” in terms of sound, “The Alternative” has in “Weirdos In Wonderland” and “Where Is Everything” an element of grim humour, as Austin wisely kept October well away from the song-writing process (bass player Matt Sargent chips in with “More Than A Giro”). “What’s Wrong With You” even possibly contains a bouncy Smiths influence in there and the whole collection is full of memorable tunes. It’s the comeback record that no-one could have foreseen would be so enjoyable. The original LP is joined here by some rough and ready live performances of the band in action which have little in common with their output at the time, apart from a hoarse “What’s Wrong With You”, but on the positive side are very fast and exciting.

The distance between the initial punk explosion and the 1990s had allowed time for goodwill and interest in that scene to return (at a low level) and given the decent reaction to “The Alternative” (by Chelsea’s own standards anyway) Gene and the same line up (unprecedented!) returned a year later with “Traitors Gate”. Again Nic Austin’s writing wisely dominated proceedings as amazingly Chelsea went two for two in the 1990s, another good record. Slightly more reflective than their previous offering (the closer “Nightmares” and the folky opening to the title track represent a pinch of more mellow sound along with the thrashier offerings), but there is still room for the comic, with “My Hotel Room” a humourous take on “life on the road” being a bit wry. “Power For A Day” recycles some riffs from the title track of the last album and “Guns In Paradise” sounds a little battle-worn, but mainly it’s another reasonably successful story of big choruses and catchy numbers, a style that would come back into fashion around the time with the likes of Rancid and Green Day. This disc comes with different versions of the album’s contents which seem to be linked by contemporary news items plus a German version of “We Dare” (I assume that has something to do with Gene recording with Die Totenhosen at around that time) and also the unreleased “Build An Ark”.

“Traitors Gate” despite its good points didn’t catapult Chelsea towards anything resembling “the Big Time” so this version of the band folded and it was another 5 years before anything much was heard of them, when the 1979 model got back together for the US “Social Chaos” tour. Though the tour itself was not exactly a roaring success for the band it did get them playing again and over the next few years they turned up at many a festival as the punk past was embraced, rather than laughed at, as it might have been the case a few years previously.

However it was 2005 before a new album arrived and by this time both Dave Martin and bassist Geoff Myles had dropped out with Tony Barber, who was also serving with Buzzcocks at the time, coming into to bolster the line up. Released on Captain Oi records, “Faster, Cheaper, Better Looking” (cough!) was their first new material in 12 years and although perhaps not having quite the songs of the 90s records was a decent enough effort. “Living In The Urban UK” has a great James Stevenson guitar which makes up for the title not quite scanning (Gene gamely tries to squeeze all the words in).

Drummer Chris Bashford (who actually wrote a lot of the songs for this one) and James Stevenson collaborated on “We Don’t Want It” and it’s probably the best song on here. A cover of the Alarm’s “45 RPM” was big news at the time as it had recently been a hit (this song does “slightly” resemble “Alternative Ulster”) and “Bad Advice” jumps out of the speakers like the 70s had never finished. “Cosy Family Way” puts the brakes on a tad and the record does lose a bit of momentum as a result. Ritalin Kid is another semi-slowie and has a little more atmosphere, but it’s mostly mid-paced chuggers throughout. The album concludes with the cheeky and knowing “If We Knew Then”.

The bonus tracks here feature versions of Sonny Curtis’ “I Fought The Law” (done Clash style, but it’s not Topper drumming on this!), “White Riot” and a more unusual choice in Iggy’s “Home”, plus a few which didn’t make the LP. The cautionary tale of “Mr Ferry’s Son” being the stand out, chiding Bry’s privileged off-spring Otis whose antics saw him get overpowered by a man in tights (it wasn’t Robin Hood). The originals are all pretty good and wouldn’t have looked out of place on the LP, though the covers are a bit ropey to be honest.

While not quite achieving the highs of “Evacuate” and their early singles Chelsea, over the course of these three later period Chelsea records they at least put on a respectable showing – “The Alternative” being my personal favourite of the trio, but the other albums featured here are not without their own charm too.