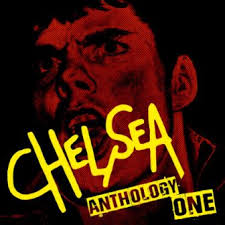 As part of a comprehensive three volume re-issue programme, the first 3 Chelsea albums are released as a box-set with a booklet containing song lyrics and a band history. Ian Canty has the Right To Work on writing this review…

Divisive, that’s the word I’ve been searching for, that sums up Gene October and to a lesser extent Chelsea to a T. “Tending to cause disagreement or hostility between people” yes that’s spot on. Though being there almost right at the start of Punk in some form, Chelsea were always looked on as a bit of fake outfit, the runts of the litter. Starting off as John Krivine’s (the owner of “Boy”, main competitor of “Sex” on the Kings Road) idea as his shop’s answer to the Pistols, the most celebrated line-up of the band featured Tony James and Billy Idol who were soon on their way to bigger things with Generation X. A myriad of line-ups followed and combined with October’s, hmmm, “combative” personality most people gave them a wide berth, seeing them as Punk’s nadir.

From my point of view, I think that is a little unfair. Whatever antics October got up to off stage, Chelsea did put out some good records and he somehow always got interesting people to join the band along the way. It’s tempting to compare them to a 70s version of John Mayall’s Bluesbreakers, though they sound nothing like them (and on a much smaller scale of course), as they both provided a platform for some talented folk who inevitably quickly moved on.

The first disc here is the self-titled début, which was released (late-in-the-Punk-day) during the Summer of 1979. While perhaps not as dynamic as the trailblazing albums like “The Clash”, “Crossing The Red Sea With The Adverts” or “Never Mind The Bollocks”, it’s an enjoyable enough set. “I’m On Fire” is a good opener with some great James Stevenson guitar, “12 Men” could have come off of “Give Em Enough Rope” and October actually sings Jimmy Cliff’s “Many Rivers To Cross” very well. Though mostly a punk/rock mixture, “Government” hints at the Post Punk to come, which while dealing Chelsea themselves a fearful blow didn’t knock them out for the count. The original album is buffeted here by 4 bonus songs, which are demos of a couple of album tracks plus early takes of “Urban Kids” and “No Escape”.

Under the managerial auspices of Police manager Miles Copeland they now looked to ride the by now massively successful coattails of the Police in the US. To bookend the first phase of the band, came “Alternative Hits”, a stop gap “Greatest Hits” set. Documenting the As and Bs of the band’s singles going right back to 1977, this record made the higher reaches of the Independent Charts and showed progress from being archetypal exciting Punk shouters (“Right To Work”, Mark Perry’s “Urban Kids”) and to the more rock based approach of the later material (the cover of the Seeds “No Escape” and “Look At The Outside”). Bonuses here include the “High Rise Living” single and some early demos (somehow October thought it reasonable to entitle a song “Pretty Vacant” too!). Though a pleasing collection in it’s own right it does tend to confirm that the band was short on ideas and confidence so when James Stevenson decamped to Generation X they ground to a shuddering halt.

Ironically, this fissure would result in the best record of Chelsea’s career. Filling the gap left by Stevenson’s departure was Nic Austin, a talented guitarist and songwriter who would write the bulk of “Evacuate”. This album was trailed by the super-basic “Freemans” (a big favourite of Die Totenhosen) and the downright loopy “Rocking Horse” singles (both included here with their b-sides as the bonus tracks). By now the wave of 80s Punk had speeded things up and though Chelsea themselves played on the same scene, they must have seemed anachronistic to the more gung ho set.

Even so “Evacuate” is a triumph and arguably the best Punk album of 1982. Well written songs, musically full, powerful and wisely keeping Gene well away from the creative process (apart from the “Tribal Song”, the LP’s weak link, which is more than a mood than an actual, er, song), singles “War Across The Nation” and “Evacuate” itself come roaring out the blocks, more than ably backed up by the other 7 tracks. Full of songs with great hooks like “Cover Up” and “Last Drink”, it ends with the Faces-style good old scarf waver in “Only Thinking”. There’s no denying they nicked a bit from the 1978 Clash on “40 People”, but I for one can’t begrudge a little cribbing. You would have thought this could have acted as a platform for more widespread success but nothing much more was heard from Chelsea for another 3 years. This line up split not long afterwards, with Nic Austin starting Bandits At Four O’Clock with Steve Kent from the Business and Gene left to construct a whole new band.

It is an excellent LP though and one that winds up the early career of Chelsea and this box-set in fine style. For all the pitfalls I found this an enjoyable collection and well put together. Next onto Volume 2 when Chelsea faced up to the mid-80s with new lines ups (naturally), record labels and of course more trials and tribulations…..