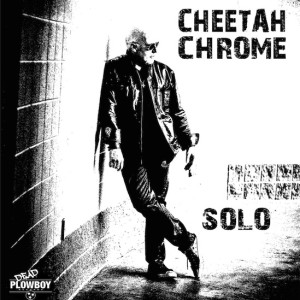 Cheetah Chrome, founder of the legendary Dead Boys, recorded these songs in 1996 with fellow NY punk luminary Genya Ravan at the controls. He calls this his lost album and he’s released it on his own label which has signed a raft of roots and Americana artists and is well worth checking out in it’s own right.

Despite the fact that the kid who is Ron Weasley in the  Harry Potter franchise plays him in the CBGB movie (which, to be fair, is nothing like the car-crash it’s made out to be. Think Almost Famous with spiky hair and better drugs) Cheetah is rightly regarded as a punk legend. He probably invented (and perfected) the psychotically staring, drooling, vacant, ugly- boy look that became so beloved of front-row photographers capturing teen punk audiences. He also, don’t forget, co-wrote some of the greatest songs to come out of that era. The Dead Boys don’t get anything like the kudos of the other NYC bands; maybe it’s because they were out-of-towners (they came from Cleveland, Ohio), maybe it’s because they were regarded as too in thrall by The Damned and the Brit-punk style. Maybe it’s because they were genuinely grade-A headcases and drug-hoovers who lived it a bit too much. No matter, they created two utterly seminal albums that stand up today. Let’s face it, Guns N’ Roses probably wouldn’t have been anything other than another hair metal band if they hadn’t had Dead Boys fanatics Duff McKagen and Axl Rose guiding them and copping the attitude wholesale.

To Solo, then; it’s a seven-song collection and it has guest appearances by Syl Sylvain and a couple of Joan Jett’s band. It is also rather good. Chrome is way much more than “Sonic Reducer”;  Sharky is a surf-rock instrumental with some sweet Farfisa organ framing Chrome’s chiming guitar lines. Stick this on the soundtrack of a movie and it wouldn’t seem at all out of place. There’s a hint of Nuggets garage psych in it’s minor key grooves, a thing of simple beauty.

East Side Story opens with some clipped acoustic before the familiar choppy chords drop in around Chrome’s cracked baritone vocal. He actually sounds not unlike Stiv Bators at times in this ‘un as he tells of his neighborhood now and then which may or may not be intentional. I liked it anyway. The production throughout is crisp and powerful and has a touch of The E-Street Bands soaring classicism.

Rollin’ Voodoo has a bass line and drum intro that thunders along as Chrome’s acoustic and phased electric pan across each other. His vocal summons Jeffrey Lee Pierce at times and this is one under-rated vocalist. Nuthin’ has a big old ballad intro that evolves into a bittersweet tale of chasing drugs and dead-end deals.

At the CBGB Festival last October, Cheetah Chrome and his group was the stand-out of the bands I saw that couple of days. Nice fella, too. Here he is doing the classic Sonic Reducer-

This is definitely worth checking out, as is his rollicking book of his times in the NY punk Underground, “Cheetah Chrome: A Dead Boy’s Tale From The Front Lines Of Punk Rock”