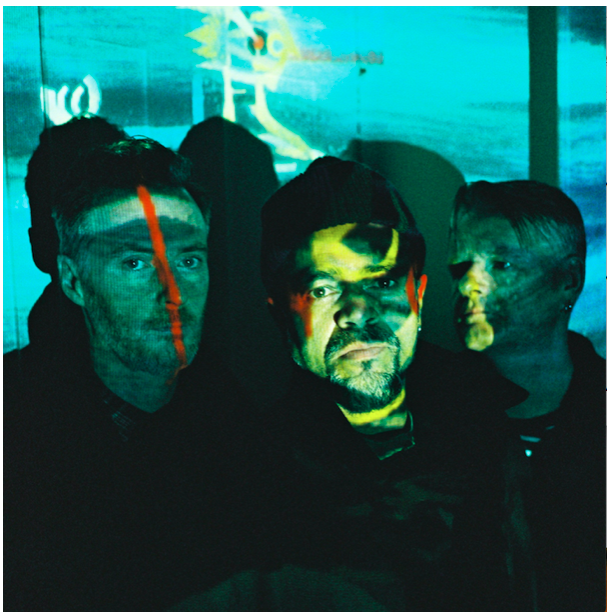 The trio of Scottish music innovators CHECK MASSES share their debut single “DRIPN ANGEL”, out on 10th January 2020 via Triassic Tusk RecordscSitting somewhere in that bricolage world of TV on the Radio, David Holmes, David Lynch, Ennio Morricone, Massive Attack, Gorillaz the song is a catchy and compulsive slice of 21st century pop but with a post punk edge.

Three Scottish music innovators have emerged from the nocturnal shadows as CHECK MASSES with their debut single “DRIPN ANGEL” — an evocative trawl through psychedelic soul, widescreen hip-hop and blues mythology.

Separately, Vic Galloway, Saleem Andrew McGroarty and ‘Philly’ Angelo Collins have helped shape the sound of Edinburgh through underground gigs, club culture and broadcasting. They pull on their different influences in CHECK MASSES, reflecting facets of the ever-evolving city – both the birthplace of Scottish punk, and the home of Young Fathers.

Their first single “DRIPN ANGEL” is threaded with dusk-to-dawn tension, channeling the dark heart and desperation of the blues through a modern lens. The trio’s influences weave through the song, from Philly’s cracked soul melodies and spectral chanting to Andy’s oil drum beats and tinkering electronics, with Galloway’s echoey guitar twangs channelling Morricone and late night Lynchian paranoia.

While he’s a punk at heart, Galloway is a true authority on the diversity of Scottish music, through his 20 years as a BBC presenter and his 2018 book “Rip It Up – The Story of Scottish Pop”, the definitive history since the 1950s. Closer to home, “Songs in the Key of Fife” is his first-hand account of the East coast’s rich musical legacy, informed by playing in various bands with James Yorkston and King Creosote as a key member of the Fence Collective.

Philly moved to Scotland from the Seychelles as a kid and has been in bands since the mid-90s. After EMI signed him for an album he resisted the label’s attempts to nudge him into an R&B corner. But with the help of McGroarty as executive producer, he later explored an acoustic path with psychedelic post-rock shades on his self-released debut “Kings and Queens”, cut from the shelved EMI tracks.

Andy has been an integral figure in Edinburgh’s nightlife for years, starting the capital’s first hip-hop club The Big Payback with Neil Spence in 1990, and playing at some of the city’s seminal clubs, including Lizard Lounge and Chocolate City. He also featured on Sugar Bullet’s, “Demonstrate In Mass (One Nation Under A Dope Mix)”, the first ever recorded Scottish hip-hop track. He currently produces under the name Sound Signals.

“DRIPN ANGEL” is the first song CHECK MASSES wrote, working off Andy’s initial beat and a sample that Philly “connected to straight away”. The lyrics explore the mystical femme-fatale blues archetype. Philly says the words came “very fast, an outpouring… experimenting with unconnected words.” “The woman in the song is the Devil,” Philly adds. “I’d recently rewatched Angel Heart and was trying to get the atmosphere/desperation and the futility of making a deal with the Devil come alive in song. The blues come from the darkest part of a man’s heart, and trust me it’s all heart.”

“DRIPN ANGEL” is an inspired, improvised opening shot from the trio, as they trawl through dark themes and make it through the night.

The accompanying video nods to lurid Bond title silhouettes and the credits of the cult 70s TV show “Tales of the Unexpected”, reeled out on degrading 8mm film effects, with flashes of surrealism by Edinburgh artist Bernie Reid. Galloway says the trio were inspired by Young Fathers’ early homemade videos, as well as re-watching Edwyn Collins’ “A Girl Like You” and Queens of the Stone Age’s “Go With the Flow”.

“We wanted a lo-fi, psychedelic feel, to capture the claustrophobia and tension in the song,” he says. “We think this is captured with the dancing silhouettes, churchyard gargoyles, album artwork and Philly’s yearning vocals all colliding on-screen.”