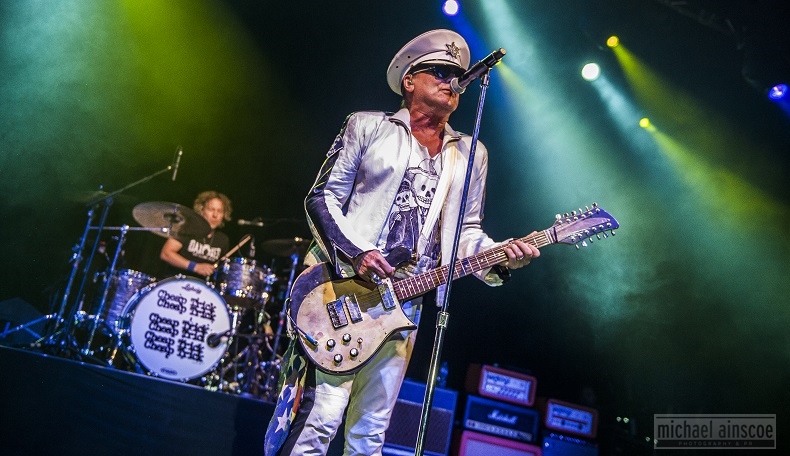 A double bill that combined the well established power pop/rock songs of Cheap Trick with something a little more down to earth from breaking  English hard rockers Stone Broken.

From Walsall, Stone Broken are  another product of the rich Midlands hard rock tradition. Recently on tour with  Glenn Hughes, upcoming gigs with Living Colour and  plenty of festivals appearances sit  alongside their own headlining assaults. One album in and they’ve been paying their dues in the time honoured tradition of getting out and playing live. A band  in  gig fit condition. The pick of the All In Time album filled out their half hour along with Doesn’t Matter as a taster from album number two due next year. 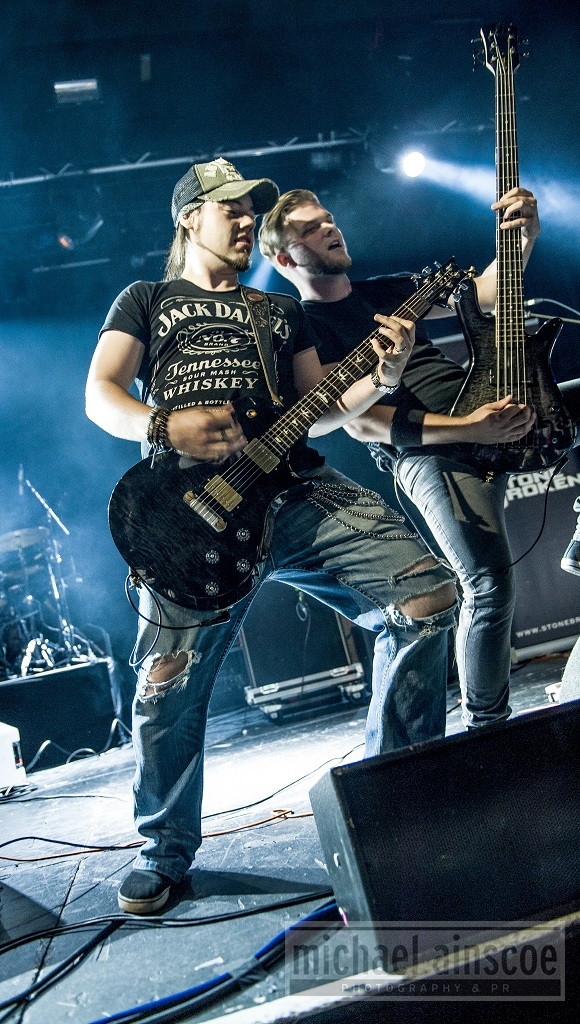 Four young upstarts with  Robyn Haycock on drums and Rich Moss leading the way, who have  an easy manner yet intense and stagecraft. A band you feel you want to root for with their  big Nickelback-y moments. They did enough to impress and have a gaggle of fans gathering at the merch stand to interact. Rubbing shoulders must be paying off.

At the other end of the career spectrum, sixty somethings Cheap Trick with three quarters of their original line up still intact, proved unqualified proof that experience counts. Not quite in the heavyweight class, but still trim and light enough on their feet and strong of lung to whip up a storm.

Visually, the initially plain stage gave way to an eye catching array of delights. Rick Nielsen’s  guitar stand festooned with guitar picks (plectrums? plectra?) akin to a bizarre ‘guess the number of sweets in a jar’ challenge. Closest wins a prize. Robin Zander strode forward decked out in a gleaming white Dream Police uniform  and peaked cap – the sort of oufit that  in his day, David Lee Roth would be teasing the ladies with. There was an early intro too for drummer Daxx Nielsen, possibly an element of fatherly pride, not just laying down the standard Bun E Carlos beat but adding an extra injection of dynamism – it must run in the genes.

Stage left, Tom Petersson looked delighted to be there underneath his big coat, wide brimmed  hat and shades – remember ‘Doc’ Emmet Brown in Back To The Future III as the old tyme gunslinging blacksmith? And of course you could always stand back and admire the instruments on show.

Musically there were plenty of muscular CT standards on show. The influence and impact of from Budokan, even almost forty years on, is still there (just missing the familiar the high pitched squeals, replaced by a more throaty English/Mancunian roar)  with I Want You To Want Me, Surrender and an early call for Clock Strikes Ten. The previous night’s cover heavy previous gig in London – often a balance heavily tipped in that direction as they do love their covers – was put right with just The Velvet’s I’m Waiting For The Man in the set. Despite that the only whinge might be that not enough of the excellent new material from both the new We’re All Alright and similarly healthy Bang, Zoom, Crazy…Hello made the set list.

The Rock And Roll Hall Of Fame might have called to stamp its seal of approval but  Rick and the boys certainly backed up the honour.  Proof in  Manchester on a wet Wednesday in what passes for the English Summer, that their tank is still full of prime gas.