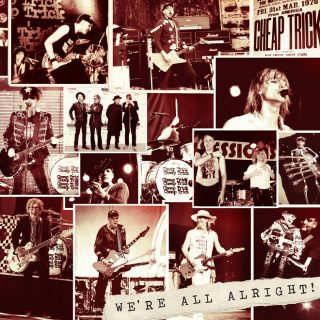 Cheap Trick are always going to be remembered for their pivotal At Budokan – the response in the far East earning them the tag of “the Japanese Beatles.” On their 18th album, they prove that the fire ignited by that flash in the pan is still smouldering away.

Smouldering but still fuelled by that late seventies glory days era – the album title harking back to the early hit Surrender. While we’re taking influences, the patchwork cover brings to mind Exile On Main Street, yet you can be sure that any band driven by  someone with the  whacky presence and mind of Rick Nielsen is always going to be aspiring to entertain and tickle the musical tastebuds.

Combining their trademark power pop with a harder rockier edge, the core trio of Nielsen, Robin Zander, still sounding remarkably youthful and Tom Petersson are joined by Nielsen jnr, Daxx on drums. Nothing like a proper bit of nepotism.

Lead track Long Time Coming is a crunching Kinks-y hard rocker and sandwiched between opening cut You Got It Going On and Nowhere, there’s an element of swaggering hard rock that seems to be shifting CT in a vibrant Aerosmith direction.  One that’s revisited at various points and one that adds a radio friendly appeal and more than a  little edge to their trademark sound. One that’s more than evident in If You Still Want My Love, which recalls latter days Beatles/Lennon, and The Rest Of My Life where   in particular Lolita takes them back to their pop sensibilities, providing a link to the Summery dream pop of Floating Down and She’s Alright.

The trend of including some bonuses for the special edition version continues and sees them taking on, all the way from the English Midlands, The Move’s Blackberry Way. One you shouldn’t go wrong with and they do a pretty faithful take.

Well worth a pop at a radio friendly and accessible hard rock album from a band you might have forgotten, experiencing something of an Indian Summer.

You can watch the video for Long Time Coming here: