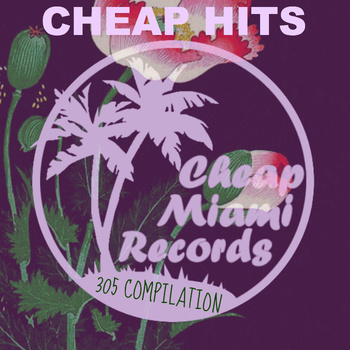 The second annual international Cassette Store Day took place on September 27th, with hundreds of participating artists, labels and events supporting analog’s runaway reawakening. Whether you prefer that warm and fuzzy bottom end sound or you’re simply after a cheap alternative to digital with a more personal touch, the current cassette culture boom is proving to be more than just pressing rewind on a forgotten format.

One of the highlights of this year’s special releases arrived in a silk screened pouch with a limited run of 100 purple cassettes via Cheap Miami records. Cheap Miami is the music loving tastemaker team of Patrick Garcia and Michelle Grand, and their Cheap Hits (305 Miami Compilation) collects 18 cuts representing the very best from Florida’s fast developing rock ‘n’ roll scene.

This scene has been much ignored and overlooked; many well-established touring bands will often skip The Sunshine State completely in favor of other southeastern cities, despite there being a high demand and a growing hunger for the rock ‘n’ roll experience there. Things are picking up, however, with high profile acts like Jacuzzi Boys and the Bruise Cruise Festival drawing more attention to the area. June Summer of Plastic Pinks (who we featured earlier as a new artist to watch) says, “We have people like Strutter USA Productions, Cheap Miami Records, Audio Junkie, Don’t Stop St Pete, Sweat Records, Idle Hands, Radio-Active Records and Commoditie Bookings that are bringing artists down here like Ty Segall, Froth, and Black Lips, and so many other acts are opening up to the idea. What is the driving force to these new fans? What is bringing this growing crowd of listeners together? The answer is THE LOCAL SCENE!! We love all these acts and we also want to be heard. Florida is uniting from south to east, west and north. You can see bands from all around Florida helping each other out and creating bonds to make our scene grow.”

You can easily hear the excitement and enthusiasm of this Florida uprising on the Cheap Hits cassette. It’s a wide-ranging mix covering garage rock, surf, streetpunk and shoegaze; there are even shades of Depeche Mode in the darkwave beats of Astari Nite’s Pyramids, the tape’s final track. I will briefly touch upon some of my personal highlights, but you can stream Cheap Hits in its entirety and snag yourself a copy through the Cheap Miami Bandcamp page here.

Plastic Pinks start things off full blast with the brisk melodies and rousing gang vocals of their slickest sounding jam yet, Fui. It might seem like a daunting task to translate the giddy ebullience of the Plastic Pinks live experience to tape, but all their trademark ‘sticky pop’ stamps are present in abundance here, pumping even the most jaded listener into hyper party mode, and it’s clear big things are sure to be in the pipeline for them. Watch them performing Waiting On the Buzzer while opening for Ty Segall at The Stage, Miami last month and look out for their forthcoming 7” on Die Slaughterhouse Records.

Please Call by The Gun Hoes has a lo-fi beachy twang and is almost like South Florida in a bottle; a bottle of cheap beer that might lead to a sleazy late night hook up going against the better judgment of both parties involved. Singer/guitarist Gabe Miranda brings the boogie and drummer Anthony Hernandez increases the band’s visibility by having such a spectacularly hairy chest that it looks like he’s wearing a bear suit.

Buffy, with their effeminate pet puppy name, confound audience expectation by actually being a bunch of grizzled long hairs and punks, singing about hard drugs and wanting to “watch your pretty face bleed”. Imagine a less camp Hunx or Pookie & The Poodlez and you won’t be too far from the mark.

Christmas, the contribution from SOXX, has a bleak, post-punk austerity unlike anything else on the tape. Singer Jorge E. Pérez has a distinctively mournful trill to his voice and the rough, emotionally charged layers of guitar melody ring out like echoes on empty street corners; lonely and lost. Gabe Miranda of The Gun Hoes recorded and mixed the band’s 2 EPs.

Red Nectar is Cheap Miami label founder Michelle Grand on bass and vocals with Bernardo Linares on guitar and drums. They have been snappily tagged as “cherry pop panty rock”, but Hot Tub is a fuzzed-out, hormone charged rager that almost sounds like Dum Dum Girls before they polished everything to a blinding shine.

Reanimadores is Ahmed Albizu’s band, a talent I came to know through watching him play bass with AJ Davila y Terror Amor at 5 New York shows this year (and we have the same Richard Hell t-shirt)! Reanimadores also features AJ Davila’s drummer Nelvin Lara. Their track Alejate is great, hip-swaying and hooky Puerto Rican garage punk with a seductively domineering bass grind bound to worm its way into your brain.

Fort Lauderdale’s Sandratz recently recruited Luigi La Rocca from Plastic Pinks, and again it shows just how close-knit and connected the scene is. They have opened for Agent Orange and The Dead Milkmen, and their aggressive punk is both meaty and speedy enough to warm up any room (while also stretchering a few casualties along the way). The live rendition of Sunshine State here is perfect evidence of this, and nicely reworks California Sun by The Riverias (as made famous by The Ramones), Southern style.

Florida may have a reputation for being the outcast of the US, but the whole rock ‘n’ roll world is readying itself to embrace the weird melting pot of music it has to offer, because these bands will proudly continue to make noise and fly the freak flag in all its wild glory.

Cheap Miami is on Facebook, Twitter (@cheap_miami) and Tumblr, or find their releases on their Bandcamp page.