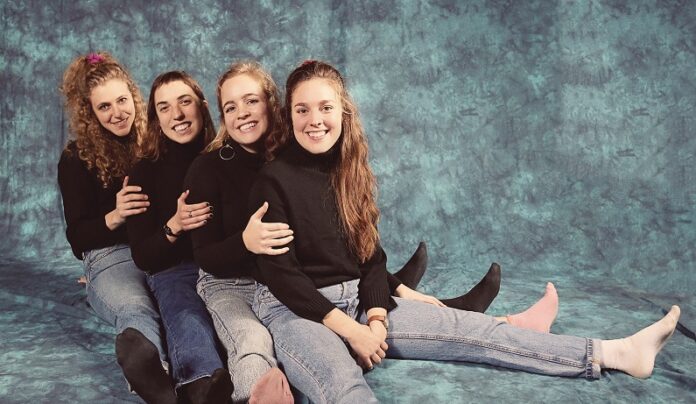 Dave Beech catches up with Seattle’s Chastity Belt a few days after their new album was released (our review) and a few weeks before their debut UK tour.

Though their debut album was a record of upbeat party tracks and irreverent college humour, Chastity Belt’s second release is a more mature, even refined record that still retains the same biting wit as the debut, but this time channels it in to a satire of what it’s like to be a modern young woman.

Freshly following the record’s release, as well as the announcement of a UK tour, we caught up with Chastity Belt’s bassist, Annie Truscott.

Louder Than War: Hi Annie, thanks for taking the time to answer our questions. First of all, can you introduce yourself and tell us a bit about Chastity Belt?

Annie Truscott: Hi! My name is Annie Truscott and I am the bassist for Chastity Belt. I have a cat named Stevie, I love oatmeal, and I will be answering your questions. Chastity Belt is a band of four friends—Julia Shapiro on vocals and guitar, Lydia Lund on lead guitar, Gretchen Grimm on drums, and myself on the bass. We started as sort of a joke and now we are sort of serious. We like to laugh, take selfies, drink Frappes, and play lawn games.

Feminism is obviously an important factor in the music industry, but its importance is a far cry from the archaic views of the movement held by many. Are there any particular issues surrounding feminism that Chastity Belt highlight as a band?

Although everyone in Chastity Belt self-identifies as a feminist, I am cautious to categorize our music as strictly feminist. The majority of our songs are the result of experiences—things that happen to and around us. As we become more familiar with the music, we have witnessed the particularly annoying and frequent phenomenon of mansplaining. The lyrics in “Drone”, the opening track on Time to go Home, are definitely a reflection of this particular issue faced by many females—musician or otherwise.

Have you found that coming from a feminist standpoint has changed the way people approach the band, either positively or negatively?

In general, the reaction to our sex-posi, anti-mansplaining has been extremely positive. The music industry has always been and still is dude-heavy but I do sense a shift happening and hopefully our sex-posi tunes hit a chord with teen gals and ladies everywhere. Maybe our male listeners will learn a thing or two as well.

The name Chastity Belt is bound to attract attention. Have you ever experienced anything particularly weird, or been treated differently thanks to your name?

We recently bought a minivan for our upcoming US tour and when we told the seller our name, he gave a gasp and turned a little bit red. Similar reactions are pretty common but most people chuckle. I think it’s a sticky name, which is a good thing ;)

I read somewhere that you entered a battle of the bands competition before even feeling like a real band. Can you elaborate on little that?

This is a totally true fact. At the end of our second year of college, we wrote a six minute song called “Surrender” about stealing cigarettes from our moms, wearing a lot of black eyeliner, and skipping school. I’m pretty sure none of us ever actually did these things but we were inspired by the angsty teens of our small college town, Walla Walla. Since I knew one drum beat, I was obviously the drummer. Gretchen had just started taking guitar lessons so she and Julia held it down on the guitars and vocals (Gretchen can scream better than anyone I’ve ever heard scream… ever), and Lydia played the bass. The battle of the bands was put on by a pretty bro-y frat house and we made all of our friends enter their names a bunch and ended up winning the entire competition. A solid foundation from which to launch Chastity Belt.

You’ve just released your second album Time to Go Home. What have the reactions been so far?

Well our rating on Pitchfork increased by .1 so I guess that means it is a hit! I know that Gretchen’s dad has listened to it at least 20 times so that has to mean something. On a more serious note, the reactions have been super positive and exciting. We have received a lot of really wonderful press and couldn’t be happier about having it out in the world.

How do you think it compares to your debut?

I personally connect more strongly to the songs on TTGH—they are a reflection of post-college “real life” experiences that hit harder than the party songs that make up half of No Regerts. That isn’t to say I don’t relate to songs like “Pussy Weed and Beer” (because I do ;) ) but I do find that our songs on TTGH, while retaining a hint of sarcasm that litters No Regerts, have a more serious tone and sound that reflects the direction we are naturally progressing toward.

There’s a definite degree of irony and sarcasm present in your music, particularly on tracks like ‘Cool Slut’. Do you find this helps brings attention to subjects that might otherwise get overlooked if approached from a more serious direction?

Humor is a really neat way to connect with others and relay topics that might otherwise be super heavy. As a band and as individuals, we are pretty goofy and pretty serious so it is fitting that this aspect of our personalities shines through our music/lyrics.

Finally, with the album now released, and the US dates concluding early June, what can we expect from Chastity Belt as we go in to the latter half of the year?