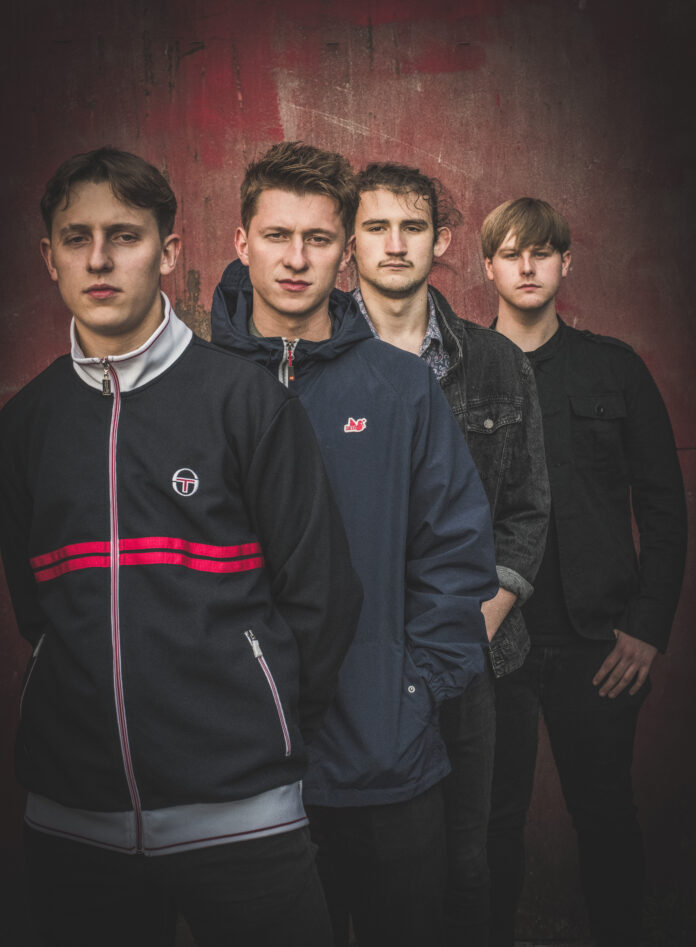 Hailing from North Manchester the four piece are the latest of a crop of new bands coming out of the city with a swagger and attitude which harks back to those that have gone before.

SHADE (in capitals!) are a ‘powerhouse indie rock band’ and will not be strangers to gig-goers around Manchester as they have been building a strong reputation over the last couple of years, something that’s evident on their official releases this year.

Their debut single ‘Neverdie’ was released in April and has been recently followed up by accomplished ‘Head In The Clouds’ on Fear Records (both available on all good streaming sites).

Listening to the tracks there is absolutely no doubt where the band come from, with singer/rhythm guitarist Luke’s nasally vocals leading the track over Ben on lead guitar, underpinned by Adam on bass and Oliver on drums.

It’s going to be hard to get away from the ‘Oasis’ comparisons as they hit almost immediately with the sound and become even easier to draw on when you realise that Adam and Oliver are brothers (reds, not blues in case you were wondering… ‘you can’t be a City fan growing up in Moston’).

There is more going on here though, the Burnage five piece only being part of the jigsaw. Having been fortunate to hear some of the demos there are other influences in the mix, such as Arctic Monkeys on ‘Illusive Dreams’ and Blossoms on magnificent ‘Interstellar’ (which can immediately be filed under ‘Indie Anthem’)

Keen to know more, I spoke to the band

LTW: The band have been together for 3 years, but Adam has only recently joined, is that right?

Yeah, Luke and Oliver were friends in school and decided to start a band at 14. We were mainly just playing pubs and small venues. We then found Macca in college and couldn’t let him get away after seeing his playing. After that, our old bass player left for the army, so Adam (Olivers brother) said he would fill in until we could find someone else…

Adam ended up liking the band, so he decided to stay. He was enjoying himself too much to leave it behind.

LTW: Do the obvious comparison to another band of having 2 brothers in the band bother you?

Not yet, we don’t usually get comments because people don’t usually figure out it out, mainly due to the fact that one of them is ugly and the other one is good looking…. so no, people never think they’re related.

Luke writes all the songs on an acoustic guitar. He brings it to the practice space and see where it goes from there. We’ve have all grown up with different types of music, but we have always been surrounded with music in one way or another.”

LTW: There have been some noticeable bands and artists to come out of North Manchester over the years. Were you aware of this growing up?

Yeah, growing up it was all we listened to. This mainly stemmed from all of our parents who were really into the Manchester music scene.

LTW: So you have always been surrounded by music?

Yeah, let’s just say there was always good music playing in the car.

LTW: With gigs uncertain, have you considered any other ways of reaching an audience?

We have been really pushing on the social media side, as that’s the only way we can reach people at the moment but we’re gonna be releasing a few singles over the next year or so.

LTW: Do you like any of the other of ‘new’ bands, such as Callow Youth and Narrow Margin, Is there is a ‘scene’ coming together?

We really think there is a huge scene coming together and really do believe it’s going to be bigger than the 90’s, especially with the amount of great songs coming out of Manchester at the moment. As a band we are really looking forward to see what happens next.

LTW: Have you decided on a follow up single to Head in The Clouds?

We have loads of songs ready to record at the moment, we’re going into Magic Garden Recording Studios soon with Gavin Monaghan who has done everyone from Robert Plant and Ocean Colour Scene to the likes of The Sherlocks and The Blinders.

Our next track will be one called Jump Into Heaven. It’s going to be HUGE!”

To find out more about SHADE…