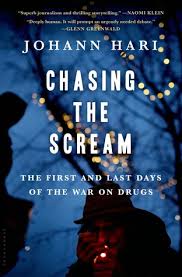 If there is one rule in life it’s that talking about drugs seems messier than actually taking them.

It comes with all sorts of coy evasiveness from the powers that be mixed with the wild eyed polemic from the drug champs and the weary resignation from the rest of humanity honest enough to know that getting out of it is part of the human condition.

In this murky world every prophet really must get stoned and this, the latest book to weigh in on the subject, is Chasing the Scream- an excellent and thought provoking dissection of the War On Drugs and a call for a rethink on the muddle headed policy that seems to be more out of it than the mumblings of the junkies who sleep next to my rubbish bin.

There’s a lot of war around these days and most of it is pointless and all of it ugly but surely it doesn’t come as pointless as the war on drugs.

If there was ever a more hypocritical campaign then please tell me. Drugs have been part of the human psyche for ever and a few handy anti drug slogans thrown around at press briefings will never change this. They are a bit naughty and they sometimes mess peoples lives up but so does eating the shitty food that is still legal or being poisoned by the atmosphere and no-one does much about that.

What is needed is a dose of honesty and a proper debate about the whole affair and maybe this great, well written and scrupulous researched book from Johann Hari is the catalyst for some proper thinking about the drugs affair.

In a society where alcohol is rammed down your throat and cigarettes can be bought wherever you want the drugs laws are so muddled and have created so much pain and confusion and hardly stopped anyone taking drugs that you wonder why they bother in the first place. Johann Hari has his own theories about this that start withy racism in the USA and  has spent three interviews interviewing all manner of drug prevention people, drug law enforcers and the myriad of broken hearted stories that generally make up the drug world.

He details the total failure of the war on drugs and details its madness and its mind bending consequences that are more surreal than what most of the best drugs can offer. He looks at the prohibition that has caused the virtual collapse of countries like Mexico where gansters run the streets and the powders are the new currency and corpses are the new currency.

The book tells the history of the  war on drugs and looks for alternative ways of dealing with the issue.  It’s written around three key stories- the persecution of Billie Holiday whose drug addiction was used a lever by the racist authorities which included Harry Anslinger the  first commissioner of the Federal Bureau Of Narcotics who kicked off the war in the first place and Arnold Rothstein the New Yorker who Hari claims invented the modern notion of the drug gang. Through these stories he moulds the modern perception of drugs and drug crime in a grippingly written book.

In Uruguay he interviews Presdent  Jose Mujica – you know the one the former guerrilla leader who lives in his tin shack rather than the presidential palace and drives a beat up car and who likes to think out of the box and legalised Marijuana in his country rather than continue the century old war on drugs that had seen his country swapped in illegal stuff.

He travels to Portugal where  he meets Joao Goulao, who decriminalised possession of all drugs in 2001 which at that point the stats for drug abuse fell through the floor. Apparently employers  get tax breaks if they employ former addicts and pure drugs are supplied in special clinics to the 10 per cent who can’t give up. Maybe this is a solution.

There has to be one. We can’t continue pretending that everything is ok. The whole issue is well argued throughout the book from one of our best young writers whose own career as a vital left wing columnist hit the skids three years ago when he went from being the darling of the left wing press with his snappy and witty columns  to pariah because he was caught plagiarising other people’s work and attributing quotes from other interviews as his own, and under an alias, spreading fibs about other journalists via Wikipedia. Hardly the stuff of great crimes but he makes he is still beating himself with a big stick for it but he needn’t worry- it’s great to have him back and on the form of his career.

This is a key book and one to throw at the lawmakers who refuse to budge on a key issue of our times. it’s well argued, well written and cuts through the muddle of hypocrisy and is a damn good read.