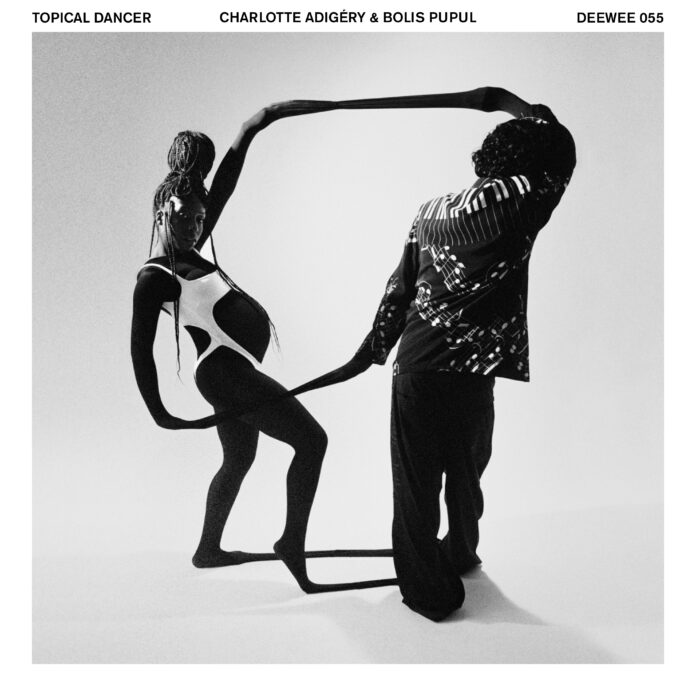 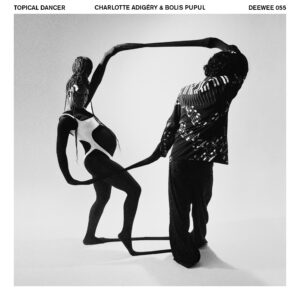 With their debut album, Topical Dancer, Belgian duo Charlotte Adigéry and Bolis Pupul deliver a potent commentary on cultural appropriation, misogyny and racism, all enveloped in a cloak of exuberant electro-pop. Gordon Rutherford reviews for Louder Than War.

Let’s raise a glass to David and Stephen Dewaele. Better known as the Belgian electro gurus, Soulwax, the brothers had the vision and the sagacity to unite Charlotte Adigéry and Bolis Pupul, whom they encountered as individuals employed on the recording of their Soulwax film soundtrack, Belgica. Generously, they handed Adigéry and Pupul the keys – and keyboards – to their Ghent studio. With licence to run amok amongst Soulwax’s banks of synthesisers, the novice duo has delivered an end product that must be, despite their confidence, beyond the wildest expectations of the Dewaele brothers.

We will come to the tunes later (spoiler alert: they are fantastic), but the first thing that really jumps out at you from Topical Dancer is the humour. It is blatantly signposted in the form of the track entitled Haha, which is built upon a sample of Adigéry laughing. Additionally, we have the album’s opening track, Bel DEEWEE, which is a series of recordings of Adigéry attempting to gain access to their label HQ via the intercom. It may be only forty-two seconds long, but it’s enough to paint a broad smile on our face. It’s the perfect mood setter. Bel DEEWEE is followed by the super-smart Esperanto, featuring Adigéry’s hilariously bold line: “Don’t say ‘nice pair’/say ‘I love the symmetry of you’”. The sassy Ceci N’est Pas Un Cliche sees Adigéry take an ironic shot at chart fodder by rhyming off a series of trite and hackneyed pop lines, like “throw my hands up in the air”. On the album closer, Thank You, Adigéry sarcastically offers up gratitude to all of those who have given their unwanted and unsolicited opinions. “Yes, I prefer my first EP too”, she drawls sarcastically.

It’s evident, therefore, that Adigéry and Pupul are having the most incredible fun here and there is no doubt that they brighten up the room. But for all the humour, there is an extremely fundamental message running throughout Topical Dancer. As Belgians with an immigrant background – Adigéry is of Guadeloupean and French-Martinique ancestry whilst Pupul is of Chinese descent – they have first-hand experience of the existence of discrimination at all levels.

They tackle these issues by shrouding them in sardonicism, but make no mistake, underneath the mordant tone, Adigéry and Pupul are making a vital statement here. Earlier, I spoke about the comedic causticness of Esperanto, but it’s so much more than that. This is a composition that is reminiscent of SAULT’s You Know It Ain’t, with its intelligent balance of irony and hard-hitting truth. “Don’t say ‘but where are you really from?’”, entreats Adigéry, before going on to mock those who claim that “I’m allowed to say that because I grew up in a black neighbourhood”. It’s a potent message, one that is specifically targeted at well-meaning white folks, but Adigéry delivers it in a beneficent, non-confrontational way; like an adult patiently explaining something important to a young person. Reservedly, she is not advocating a storming of the barricades.

The theme, and the tone, continues in the following track. Over a throbbing dance beat, Blenda opens with the oft-quoted casual racism of, “Go back to your country where you belong/Siri, can you tell me where I belong”. It’s a brutal line; one that stops you dead in your tracks, especially when you learn that Adigéry has spoken previously about her guilt at taking up space in a white country. Imagine being made to feel that way. She has also stated that Blenda was inspired in part by Reni Eddo-Lodge’s book, Why I’m No Longer Talking To White People About Race. And yet, in writing these songs and delivering them in this way, Adigéry and Pupul are categorically speaking to white people about race. Whether all of them/us choose to move on from their platform of faux politeness (Eddo-Lodge’s term) or not is a different matter.

The issues faced down by Topical Dancer are not limited to those of race. The perfect example is It Hit Me. Both Adigéry and Pupul take turns of singing on this song. At the outset, their voices are pitched up, deliberately making them sound childlike. Adigéry’s piece, in particular, is quite shocking, as she describes what it’s like to be a teenage girl waiting at a bus stop to go home after hockey practice. She is conscious of adult males across the road wolf whistling and staring at her, but she cannot figure out why. Then she does. The aforementioned Blenda addresses stereotyping. “Don’t sound like what I look like/Don’t look like what I sound like”, sings Adigéry. As Pupul explains, “people perceive me as the producer and Charlotte as just a singer. Or that being a Black artist means you should be making urban music. Those kind of boxes don’t feel good to us”.

So, we have an album that combines acerbic wit with a weighty and considerable message. But what’s the music like? There is no doubt that Adigéry and Pupul deserve the utmost respect for the intelligent and compelling way in which they surface these issues, but they warrant just as much acclaim for the strength of the songwriting. Many people will be familiar with the singles, Blenda and Ceci N’est Pas Un Cliché, both of which are incredibly bright and bubbly, swaggering atop throbbing dance beats. Making Sense Stop comprises a beautiful rise and fall melody with the vocal deviating from pitch-altered madness to Adigéry’s falsetto, arguably her finest vocal performance on this collection.

Speaking of outstanding vocal performances, the other excellent example is the beautiful R&B ballad, Reappropriate. There is a wonderful counterpoint in the shape of a bleeping, rippling synth, creating a sci-fi feel. It should be completely at odds with Adigéry’s gorgeous torch-song vocal and yet they dovetail superbly. I’ve referred to Esperanto a couple of times already. Consciously so, because this is the album’s stand-out track. At the nub, when everything is stripped away, Esperanto is quite simply an outstanding pop song, built upon the most infectious groove. That similarity to SAULT extends to the musical quality, not just to the intelligent carriage of a powerful statement.

Earlier, I mentioned that Pupul had commented upon the duo’s discomfort at being put into boxes. On Topical Dancer, they overcome this by flitting across multiple genres whilst not wedding themselves to any one in particular. They don’t even limit themselves to one language, with lyrics delivered in French, Creole, English and Dutch. You get a sense that the duo is laying traps everywhere, trying to destabilise us. Consumers of all media today like things that they can understand and absorb in a moment, but Topical Dancer doesn’t fit that model. Instead, it will make you think, as it leaps from place to place. All of that makes for a really entertaining and engaging listening experience.

As it unravels, it takes you on a fantastic voyage. You begin with the sheer exuberance of the music before peeling back the layers. It is a protest album, possibly the world’s first electro-pop protest album. Possibly the only time you will feel compelled to dance whilst simultaneously smashing the system. Charlotte Adigéry and Bolis Pupul have created a wonderfully cerebral album that makes us think. But at its heart, Topical Dancer is a fantastic pop record, one that is lyrically unflinching and musically compelling.